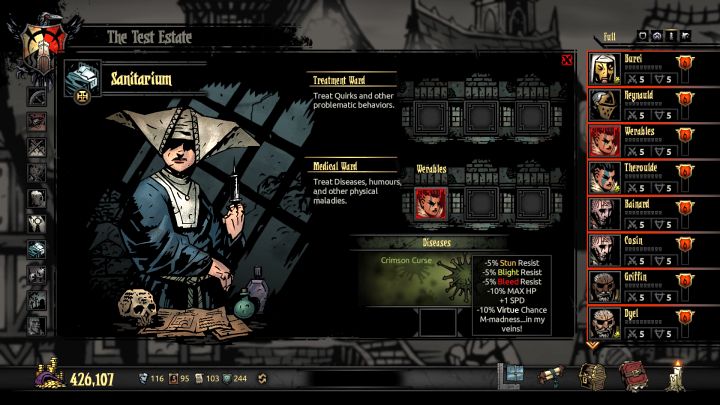 The Crimson Curse DLC introduces numerous things to the Darkest Dungeon, one of them being the Crimson Curse. This is, basically, a form of vampirism used in the game. A hero can be infected with it when attacked by majority of the enemies added to the game with the DLC and it has a huge impact on the gameplay itself. Depending on the decisions of the player, the Crimson Curse can either have positive effects (if the hero was given The Blood) or negative ones (if the player lacks any blood). The Blood used to control the curse is quite easy to acquire, but when you have too many heroes infected with it, it might become problematic. If your heroes can't get any blood, they will receive severe penalties and, after few weeks of deprivation, die.

This is why it's crucial to get rid of it as quickly as possible. This is, however, not that simple. During the first hours of the game you won't have any means of curing the illness. The only solution to this problem is to eliminate one of the three major bosses - the Baron, the Viscount and/or the Countess. Once you take down any of them, all of your infected heroes (not only the ones used for the elimination mission) will be cured. They, however, can (and most probably will) be infected again.

There's a second solution to this problem. Once you defeat all three of the mentioned bosses, Sanitarium (the building used to cure diseases and manage quirks) will gain a new function - it will now be able to cure the Crimson Curse as well. It works exactly the same as with any disease. You need to place your hero in the Medical Ward, select the disease you want to get rid of (Crimson Curse in this case) and accept your choice. Once a week has passed (you need to complete a mission to do so), the hero will leave the Sanitarium and the Crimson Curse won't bother him/her anymore.