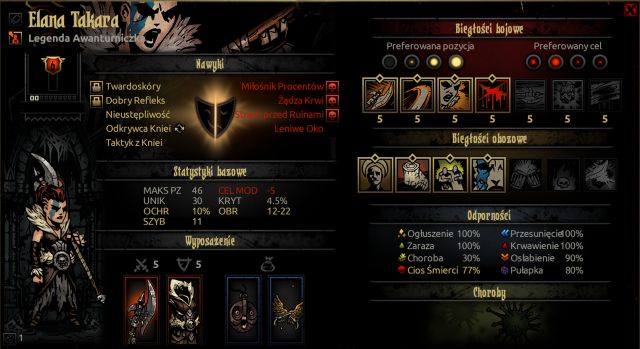 Each character is described by a number of different attributes, resistances and quirks.

Each hero in the game is described by a number of attributes, which influence his / her effectiveness on the battlefield. There are 7 different attributes assigned to every hero, which are: Maximum Health, Dodge, Protection, Speed, Accuracy Modifier, Critical Chance and Damage. Aside from that, all characters have their own resistances to various types of attacks and sources of damage.

Those are basically the hit points of your hero. If they fall to zero, the hero will enter the "Death's Door" state, in which every subsequent received damage has a chance to permanently kill him / her. Health can be regenerated by using various abilities, consuming food and setting up a camp. Health points are restored to the maximum upon returning to the city.

Dodge, as you have probably guessed, determines the chance to completely avoid the attack - which is avoiding the damage, negative effects (weakness, damage over time, etc.), or the stress damage. Dodging is, in a way, better than protection because of the fact that it allows you to avoid receiving any stress damage (if the attack misses), but depending only on dodging can have some serious consequences - when a character with zero protection is finally hit, it can take a lot of his / her health.

Dodge works both for heroes as well as your enemies. The dodge chance decreases the chances that the attack hits the target - if a unit has 90 accuracy, and your character has 50 dodge, it basically means that the enemy has 40% chance to hit its mark.

Dodge increases with each level of character by 5.

Protection is simply the ability of the character to mitigate a portion of damage - it can be compared to the typical "defense" from almost every RPG or H&S game. The protection has a percentage value and it directly influences the amount of damage the character receives. If the enemy attack inflicts 10 points of damage, and your character has 40% of protection, the enemy will be able to deal 6 damage at most. This also applies when your heroes attack the enemy units.

A thing worth noting is the fact that the reduction is always rounded down. If your hero has 10% of protection, and the enemy attack should do 1 damage, it will instead deal 0 (in the case of 2 points of damage the enemy will deal 1 point, etc.). Every percent of protection is priceless.

Protection is one of the two attributes in the game (next to accuracy), which do not increase with levels - you can only increase it with the help of trinkets, quirks and some abilities.

The calculations take place after each action (not round) of any character on the battlefield, which means that buffs / debuffs to speed have a direct influence on the order of movement. If you want to be one hundred percent sure that your hero will move earlier than the enemy (especially before units that inflict stress damage, as those tend to be the fastest), he / she must have 9 points of speed more than the said enemy.

Speed is so important because of the fact that sufficiently high value will allow you to eliminate some of the enemies before they can even move - it's extremely useful when dealing with enemies dealing a lot of stress damage, as stress is a lot more dangerous than normal attacks decreasing health. It is a good idea to have someone in your party who has a guaranteed move before the enemy team - a good choice is the Abomination, Grave Digger, or Jester, as all three of them have high default speed attribute.

The speed of your heroes will increase with weapon upgrades. Additionally, it can be further increased with the help of trinkets, quirks, hero and camp abilities.

The accuracy modifier influences the effectiveness of the abilities your heroes use. Just like protection, accuracy does not increase on its own as your characters level up, and can only be increased with trinkets, quirks and certain abilities and camping skills.

Accuracy works in such a manner that it simply increases the default chance to hit of a given ability. If an ability has 90 accuracy on its own, and your hero has accuracy modifier of 15, it means that the ability will hit with a 105 chance to hit. The chance to hit depends on the dodge chance of the target - an attack with 105 accuracy on a target that has 25 dodge has a 80% chance to hit.

Critical chance is one of the most important parameters of your characters. The higher the chance to crit, the more often it will happen. Critical hits are immensely important, and that is because of two reasons - they allow you to deal double damage (or to heal double the amount), and they decrease the stress of the hero that performed the hit (giving a small chance to reduce the stress of other heroes as well).

The chance for a critical strike increases as you upgrade the weapons of your characters. Additionally, it can be influenced by proper trinkets, quirks, hero abilities, as well as camp abilities.

Damage is simply the amount of health points that an attack is able to take from the target. Damage is in turn modified by the base parameters of a skill and with that the amount of final damage is calculated. If the character has its "own" damage ranging from 12 to 16, and uses an ability that has a -50% damage modifier, this character will be able to deal from 6 to 8 damage.

The amount of damage dealt is doubled in case of a critical strike and decreased by the percentage value of the target's protection.

Damage increases as you upgrade the weapons of your characters, as well as with the help of trinkets, quirks, hero and camp abilities.

A resistance of a hero is simply a chance that a given negative effect (blight, bleeding, disease, or a debuff) won't be applied on him / her. Resistances can reach values normally unattainable (or to be more specific - unattainable without cheating), and the only exception to that rule is the Death Blow Resist, which can reach up to 87%, and the ability to disarm traps (although it is not a resistance), which can reach up to 135%.

Resistances work in a similar fashion that the rest of the parameters - the chance that a character, for instance, gets blighted depends on the amount of resistance to blight it has, as well as the effectiveness of the attack. If a character has 150% resistance to blight, and the attack of the enemy has 160% base chance to inflict it, it basically means that the enemy will have a real chance of 10% to apply its effect.

The most important resistances are the Death Blow and Disease ones - although you shouldn't neglect the others. Resistances to stun, move, blight, bleeding and debuff, as well as the chance to disarm traps increase by 10% per level of the hero (up to 60%). The remaining ones (as well as the ones described above) can be increased by trinkets, quirks, as well as hero and camp abilities.