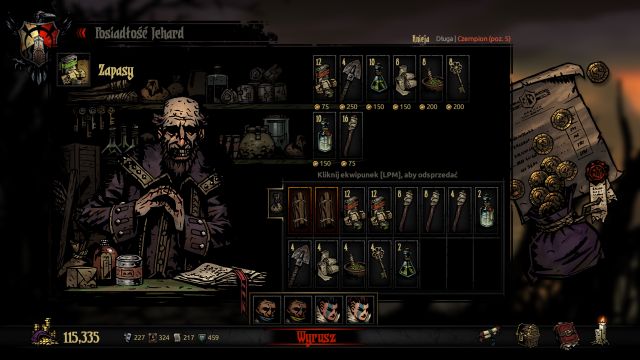 Remember to purchase the right provisions before venturing on a mission.

Provisions are items that you can purchase before the mission starts, during the "briefing stage". Those items are immensely useful during the exploration of a dungeon, and they might (and probably will) come in handy during combat as well. Some of them are also used to activate Curios. Provisions consist of: Food, Torches, Shovels, Skeleton Keys, Holy Water, Medicinal Herbs, Bandages, Antivenom, The Blood and Laudanum.

The food is the basis of the game - it mainly serves the purpose of satisfying hunger of your heroes, both during the "hunger check" (which happens randomly during your venture through the dungeon) and when you are setting up a camp to rest. It is also the only provision that punishes the player severely for the lack of it - feeding your party or setting up a camp without food will cause a huge amount of damage (about 20% of max health) to your party, together with 15-20 stress damage as well. You should always bring plenty of food on your missions.

Food can also be used as an emergency source of healing - a single hero can east up to 4 units of food in one go, which should bring back anywhere from 8 to 16 health points (depending on the maximum health of the character).

When starting a short mission you should take at least 12 units of food, from 16 to 18 on medium missions, and anywhere from 18 to 24 on long ones. Those values need to be decreased / increased depending on whether your characters have items / quirks that influence the amount of food consumed. Each character with a +100% to consumed food should equal a +25% increase of food brought to a dungeon, whereas each hero with a -100% food consumed should decrease the value by 25%.

The cost of food is relatively small compared to the amount of gold you will have to spend to get rid of all the accumulated stress when your character run out of this provision.

Torches influence the amount of light you will have, and the quantity you decide to take on a mission depends entirely on your playstyle. If you want to play in full (100) light, and you don't want to rely on your heroes' abilities to increase the light, purchase 8-9 torches on a short mission, 14-16 on a medium one, and 16-20 on a long mission. It should suffice to complete the mission while keeping the highest light level all the time.

Even if you want to play with the lowest (0) light level, it's always worth to purchase 1 or 2 torches - those can be used at the Shambler's Altar to summon the mini-boss.

The purpose of shovels is to get rid of obstacles that will appear inside of corridors from time to time. Getting past them while using this item will allow you to keep your light level, as well as prevent your party from suffering damage and stress damage. If you decide to force your way through the obstacle with your "bare hands", the light level will be decreased by 25 points, and your whole party will receive about 20-25% (max health) damage, as well as the same amount of stress damage. Those can also be used to activate some of the Curios.

For each Grave Digger in your party you will be given a free shovel - which, unfortunately, cannot be sold.

Skeleton Keys are used only to interact with Curios - the full list of objects which can be activated with this item, as well as the potential rewards from doing so can be found in the "Curio" section of this guide. Additionally, Skeleton Keys are also used to open treasure chests inside secret rooms.

Similarly to skeleton keys, the holy water is mainly used to activate a great number of Curios in the game - the effects are often associated with buffing your heroes, removing negative quirks, or decreasing the amount of stress.

Holy Water is also an immensely powerful item to u se during combat, especially when dealing with enemies focusing on damage over time (DoT), debuffs, as well as during boss fights (with the Siren, for instance). Consuming a bottle of holy water increased the resistances to bleed, blight, disease and debuff by 33%, for 3 rounds.

For each Crusader in your party you will be given a free bottle of holy water - which, unfortunately, cannot be sold.

Medicinal Herbs, aside from interacting with a number of Curios (mostly associated with food), can be used to get rid of a debuff from a character - both those cast by your enemies, as well as those gained as a result of some abilities (like a few abilities of Hellion, or the Finale of Jester)

For each Jester or Leper in your party you will be given a free bowl of medicinal herbs - which, unfortunately, cannot be sold. .

Bandages are used to activate a small amount of Curios, and most importantly, to treat bleeding. It's worth to stock on those items if you are expecting to be facing a lot of enemies inflicting that type of damage - a good example would be a number of enemies in the Cove. It's not worth to use them when your character is receiving 1 damage per round, or if the bleeding will stop by itself by the next round.

For each Arbalest in your party you will be given a free bandage - which, unfortunately, cannot be sold.

The antivenom is simply the equivalent of bandages, the only difference being the type of status it cures - blight instead of bleeding. Additionally, it can be used to interact with quite a lot of Curios, especially those located in the Cove. It's generally a good idea to have a couple of antivenoms when you are venturing into a dungeon filled with enemies inflicting blight.

For each Plague Doctor in your party you will be given a free bottle of antivenom - which, unfortunately, cannot be sold.

Dog Treats are the provisions unique to the Hound Master - for each Hound Master in your party you will be given two dog treats. You cannot use them to activate any Curios, but they give an immensely powerful buff to your Hound Master - upon activation, it increases the hero's damage by 100%, accuracy by 20 points and the critical chance by 5%, all for 3 rounds.

The Blood is an item connected to the new mechanic introduced with the Crimson Court add-on to the game. Crimson Court introduces a new disease called Crimson Course which is, quite literally, vampirism. Characters infected with it will crave for blood - if you won't give it to them, they will gradually gain more severe penalties to their stats until finally, after weeks of deprivation, will die. The Blood can be used to control those urges and prevent them from dying. What is more, you can give it to them when they are in "Craving the Blood!" state - this will boost their stats, increasing their resistances, damage and speed.

The Blood can be acquired during missions - new enemies of the "BLOODSUCKER" type will drop them from time to time. Additionally, you can produce two vials of blood each week with the appropriate district building - more about the topic in the "Districts" chapter.

Note - don't even think about giving blood to non-infected heroes. If you do, they will receive immense penalties to their stats, lose about 1/3 of their health and gain 40 points of stress.

Another provision introduced by the Crimson Court DLC. The item can be used to get rid of the "Horror", a status effect inflicted by several enemies. Horror deals stress damage over time - while it's not powerful on its own, the effect can stack (like Bleed) and can deal up to 10 points of stress each turn.