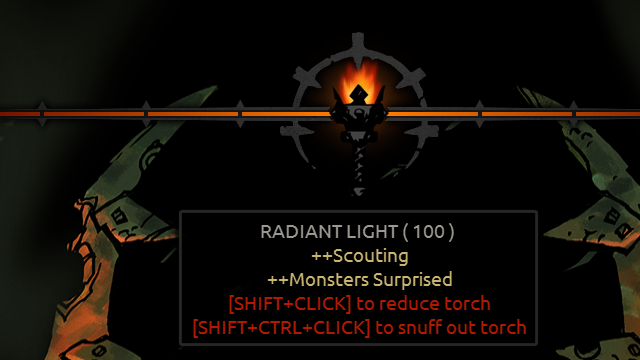 The light level is one of the most important game mechanics, which directly influences the gameplay. It impacts the chance of a successful scouting, the chance to surprise the enemy (or be surprised by them), the amount of stress damage your party receives, enemy damage and accuracy, the critical chance of player's heroes, as well as the chance of getting better loot.

The level of light can take a value between 0 and 100, and it's divided into different stages:

As you can see, the light level directly influences the gameplay - as it decreases, the potential benefits for the player increase ("high risk, high reward" rule).

The light can be influenced (aside from torches), by:

If you are planning on playing on the highest light level, you should consider using the abilities of the Vestal (Dazzling Light and Illumination), Arbalest (Rallying Flare), or the Crusader (Inspiring Cry), to increase the level of light. Thanks to that, you can save some gold (instead of purchasing a large supply of torches at the beginning of the mission). Additionally, stay away from the Occultist's Hands from the Abyss ability, as it decreases the torch level.

If you are, on the other hand, planning to play on the lowest light level, you should consider investing into trinkets / heroes (like the Grave Digger) which increase the chances of performing scouting - this way you will decrease the chances of enemies surprising you.

Depending on the light level, you should use different trinkets. Those are:

You should also remember that using half-measures is not worth it - you should either play on the maximum light level (which makes the game a little easier), or on the lowest one (offering bigger rewards). If you are playing on the highest light level, you should always increase it to the maximum before entering a new room - it increases the chances of performing scouting and that your party will be the one to surprise the enemy.

With the introduction of the first DLC, the Crimson Court, a new area was added to the game - Crimson Courtyard. Once there, you will notice that the light system works differently - it's always at the maximum (you will gain benefits of the items requiring the light to be above 75 points), but it won't give you any benefits. Instead, it will cause 1 point of stress damage to a random hero once your party moves through one segment of the corridor and it will decrease your heroes' Bleed resist. Using a torch there won't change the light level. Instead, it will give a +3 ACC boost to all of your heroes - the effect can be stacked multiple times.