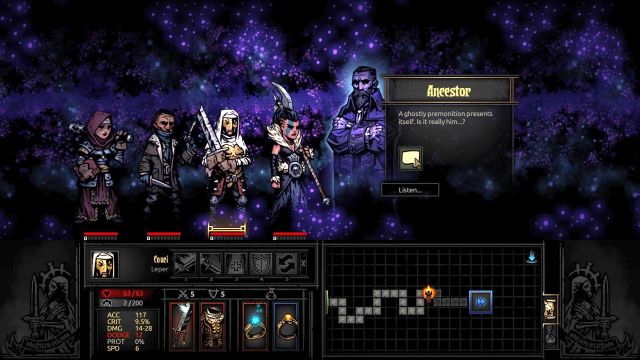 For the several first minutes, you will be talking to Ancestor.

The last quest in this campaign, and at the same time, location where you fight against the final boss is Heart of Darkness. This level is linear and there is only one path that you can follow - right. For the several first minutes, you will only be talking to Ancestor, who you will soon be fighting. After you reach the end of the corridor, get ready. In the next chamber, you start the last battle of the game. It has been divided into several stages.

A good party for this battle is one that consists of:

Vestal - thanks to her, you can heal damage that you take from the boss. During the final fight, it is best to sacrifice her in the first place.

Jester - his songs buff the entire party, heal its stress and buff combat abilities (accuracy, speed, chance for critical hit). Ester should be sacrificed as the second one.

Highwayman - class that deals some of the highest damage in the game. Additionally, you will need him during the fight with Ancestor, in the form in which he hides behind covers, outside of reach of majority of party members.

Helion - the situation is similar to the above, she is valuable due to her high damage dealt. Her Iron Swan is useful during all the phases, because you can use it virtually for the whole time (all of the forms of the enemy, apart from the first one, take up all 4 rows).

Remember to take along all the bandages, holy water flasks, healing herbs and antidotes that you can buy - you will find use for all of them. You can ignore torches because they are virtually useless here. 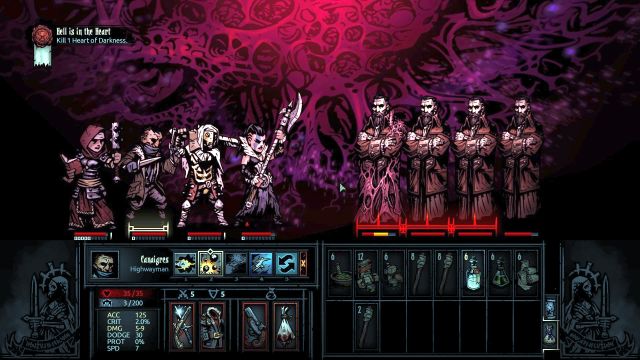 Elimination of "imperfect" copies of boss decreases his health level.

This fight is quite specific, in that you cannot deal damage directly to the boss - Ancestor. As soon as the enemy's turn comes, he will use one of his abilities to summon copies of himself. There are two types of these - Perfect Reflection and Imperfect Reflection. Killing the former does nothing (apart from eliminating the enemy for a moment), and killing each imperfect one (covered in some sort of sludge) takes away 1 point of his health.

As you can figure out, you need to repeat the tactic five times. The problem is that the perfect copies appear in the battlefield much more often and killing them does nothing. However, the more perfect reflections you kill, the higher the chance the an imperfect one appears. To decrease damage that you receive from them, use stunning abilities (e.g. Hellion's, which can deal damage to two targets simultaneously). As soon as Ancestor's health drops to 0, another phase starts. 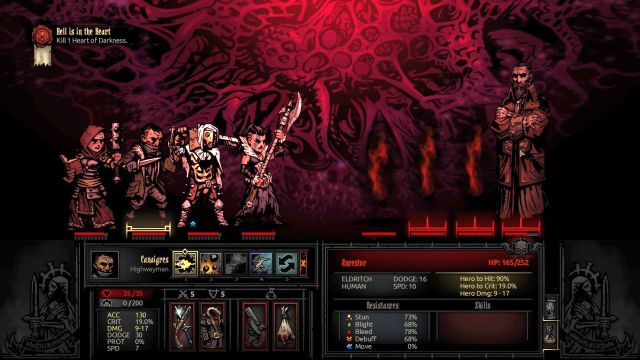 Ignore the obstacles - they cannot be damaged.

At this point, your enemy receives the normal health bar and you can deal damage to him. The battle itself is somewhat similar to the one with Prophet, because apart from the main enemy, there are strange beings appearing in the battlefield (Absolute Nothingness), which neither attack you nor take damage from you. This is why it is a good idea to have, at least, several characters that can deal damage to back rows.

Every several turns, the enemy uses one of his abilities to attack the party - after this kind of attack, he teleports into random row (even into the front one), which makes it easier to eliminate him. This phase is not too difficult and the only thing you need to watch out for is strong bleeding that the enemy imposes - you can remedy that with appropriate trinkets, or by drinking Holy Water. When a character starts to bleed, use bandages as quickly as possible - each stacked bleeding damages you for 5 health points per turn.

As soon as Ancestor's health points drop to 0, he changes his form again. 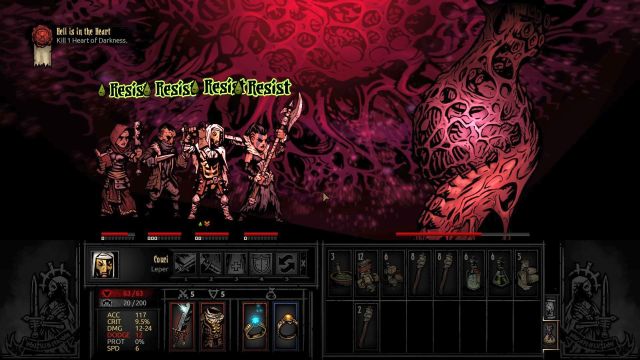 The enemy has attack that poisons the entire party, but it has low chances of success

Now you can catch some breath and you can now replenish your health, which will be useful for the next phase. The enemy will be launching one attack - a poisoning that takes effect over an area- which still has low chances of success. Your attacks, on the other hand, will restore health. Regardless of how strong your attacks are, they will restore, at least, 12 health points. There is a low point in this - each attack has a chance of poisoning the character. When your characters are poisoned, it is recommended that you remove this effect quickly, using antivenom. After you kill this opponent, you progress to the last phase. 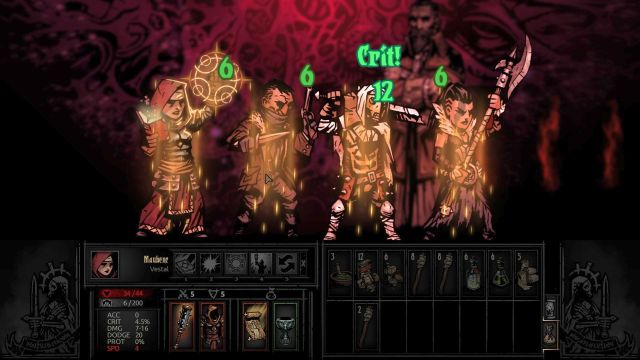 This type of healing is a real blessing.

The final phase, as a matter of fact, is a race against time. Enemy's attacks deal high damage and they have a high chance of setting bleeding or blight on you, and also you often take critical hits. Therefore, it is a good idea to prepare properly, heal all wounds during fight with the previous heart, and also use Holy Water during the first move of each character, which increases resistance.

The greatest danger and the enemy's most unique ability, at the same time, is Come Unto Your Maker. The enemy launches this one automatically, after his health drops below a predefined value (the first time is below 170 and the second around 80 points). This ability results in immediate death of one of your characters - however, you get to decide which character this is supposed to be. 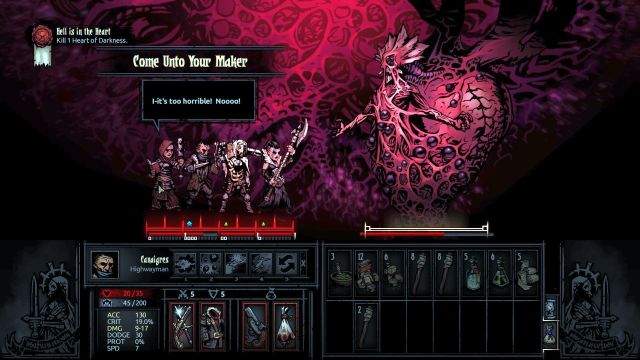 You need to bid one of your characters farewell

You should sacrifice supporting classes, or ones that have a high level of stress, little health, or simply ones that do not deal too much damage. These are Occultist , Vestal , Jester, or Man-at-Arms. Ones that are worth keeping are characters that are oriented towards dealing damage - Hellion, or Highwayman.

During the fight, ignore completely damage dealt by the boss (remove only bleeding and poisoning) and deal as much damage as possible. Enemy attacks are not too strong and his Come Unto Your Maker can claim only two of your characters. As soon as the enemy drops dead, you get to watch a long cutscene, after which the game ends and you return to the main menu.

For defeating the opponent, you will be rewarded with Newgame+ mode - a more difficult, more demanding mode that punishes you for every mistake.