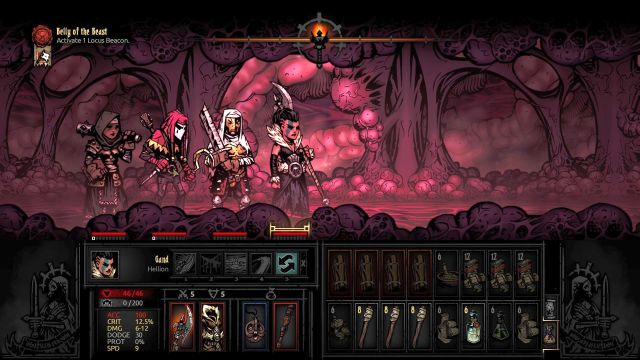 It is a good idea to take along a decent supply of food - it will definitely be of use here.

The last-but-one quest in the Darkest Dungeon campaign is unarguably the largest location that you visit (the fact itself that it has 4 campfires tells you something) and at the same time, the most annoying of all the stages in the game. Your goal is to get to the chamber with Locus Beacon which you simply need to activate. It is a good idea to get lots of food, at least 16 torches and as many bandages, healing herbs and holy water, as you can 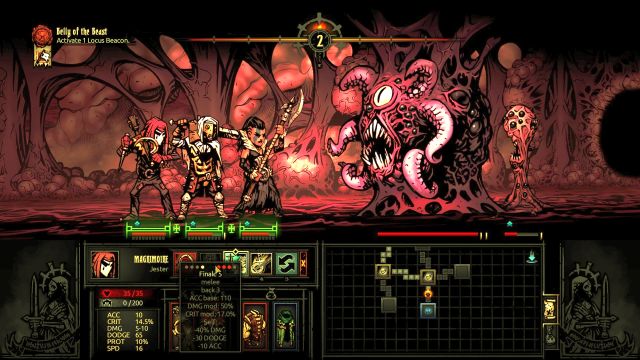 Do not attack the big monster with the smaller one in the battlefield - otherwise you will have to walk again.

Along your path to the destination point, you will be harassed by two types of monsters - Mammoth Cyst and White Cell Stalk. The former plays the role of an obstacle that is difficult to force down (lots oh health points and healing abilities), and which can deal lots of damage. The latter is much more dangerous - his teleport allows him to knock your party away from the battlefield and teleport it into any random part of the dungeon. It is easy to figure out how dangerous (and annoying) this is. The Teleportation itself is activated when the monster's ally (Mammoth Cyst) receives high amount of damage from you.

Fortunately, after you return to the location, from which you were thrown away, condition of the enemies will be the same - therefore, you simply need to repeat the tactic several times to force down the obstacle. Also, it is a good idea to eliminate the monster that uses Teleportation (White Cell Stalk), thanks to which you will not be teleported away from the battle. The problem, however, is that the other creature keeps summoning it - fortunately, Hellion is capable of dealing with the monster in one attack, by casting Iron Swan. You need to keep eliminating the smaller monster and keep depriving the larger one of his health points on a regular basis. 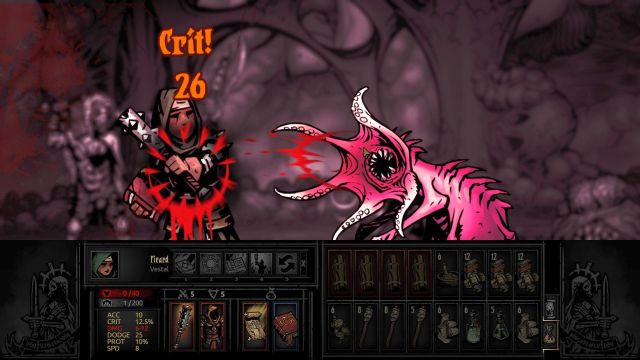 Another lethal threat that you encounter here is the small critters - Flesh Hounds. Their attacks are, mainly, pesky (because they deal little damage and they "only" stun, poison or knock you back and mark you), but the target that they mark can be eliminated in one attack (I had once a situation like that, when one of my characters died after a critical hit followed by poisoning - author). It is a good idea to eliminate them quickly, especially when one of your characters is marked - in such case, you can stun the creature to increase the character's chance of survival. 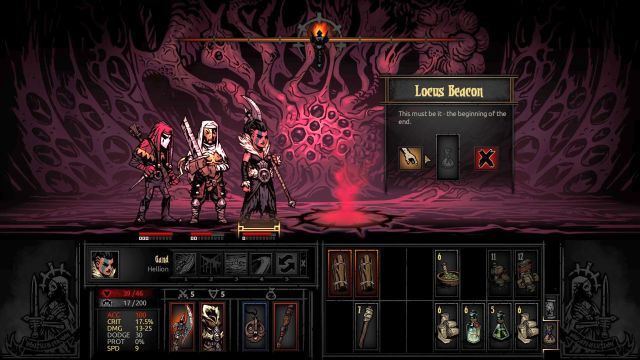 Finally, the end to the ordeal course...

For this quest, it is recommended that you take:

Hellion - her Iron Swan is perfect against White Cell Stalk, before they manage to teleport your party.

Jester - his song allows you to increase your chance of critical hit, which in turn translates into increased chance of killing the monster with one attack

Arbalest - enemies here do not have too much protection, thanks to which one attack is one kill, for her. She is excellent against Flesh Hounds, where she can, using her flares, remove their marks, which decreases damage dealt by them. Of course, you can use her for eliminating White Cell Stalk, before it uses teleportation.

Vestal - enemies here deal lots of regular damage (with a sound measure of stress), which is why you need a good healer. It is recommended that you equip her with trinkets that boost healing abilities - they will come in handy.