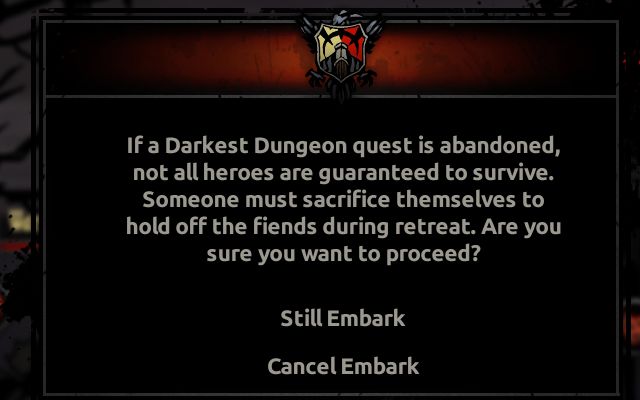 Before you start a quest, you get to know about consequences of its completion.

Darkest Dungeon location is available, for all intents and purposes, from the very beginning of the game, but starting the first quest at this point of the game would be nothing short of suicide - your party would be obliterated in the very first battle. To be able to complete those several quests that make up this "mini-campaign" your characters need to be developed to their maximum and have appropriate trinkets on them.

Difficulty level goes up abruptly here. The majority of enemies here deal high damage, often accompanied by additional stress, poisoning and/or bleeding. (the last two can drain you for as many as 6 health points per round). Simply put, an unprepared character can be brought down to his knees with a single attack - enemies often land blows with critical hits that can deal, nearly, 30 damage.

Apart from that, there are some other ways in which this location is different. These are:

1. It is not that easy, anymore, for your party to leave the mission, should anything go wrong - with the exception of the last mission, where you cannot escape at all, each escape in the Darkest Dungeon comes at a cost of the death of one of the party members, who "stays behind to make it possible for the rest to escape".

2. Individual heroes can take part in a quest, in Darkest Dungeon only once - after they are back from the mission, they decide that they have had it and you will not be able to send them to that location again. Heroes that cannot be sent in again are marked with the torch icon next to their icon.

3. Heroes that you cannot send into the mission again do not take up space. This means that you will be able to recruit new adventurers after they are back from the mission. This does not mean that veterans of Darkest Dungeon are lost forever - you can select them for any other mission.

4. The map of all four quests is the same - unlike regular quests, map here is not randomly-generated. In successive chapters that provide walkthroughs, you can also find maps to help you navigate.

5. There are no obstacles here that are typical for other locations, such as traps or nighttime traps appearing during your sleep. You can easily sleep and use up rest points for more pressing matters.

6. There is no point in taking along shovels and keys for quests - in Darkest Dungeon, there is no Curio and therefore, you will not be able to use them on anything. It is a good idea to fill the space you save this way, by taking other supplies.

7. During the four quests in Darkest Dungeon, you will not be obtaining items for killing enemies (and also Curio that are not present here). Use up free space to the maximum, buy all of the available torches, food, bandages, holy water and healing herbs. The last three will come in handy for boosting your resistance and for removing negative effects of DoT damage, imposed by lots of enemies here.

8. During the rest, it is a good idea to use abilities that decrease amount of stress that you receive. The majority of opponents in Darkest Dungeon are capable of dealing this type of damage, which is why each percent to decrease that amount is highly valuable. Remember not to use abilities that prevent nighttime traps because these are absent from here.

9. The same goes for trinkets. Do not take along the ones that offer high bonuses at the cost of high level of stress (all of the "Ancestral" rank items). While wearing two items of this type, you will be taking stress from enemies, at the level as high as 30, in one attack, which quickly ends in a panic in your ranks

10. At any cost, keep your stress level under 100. Each panic attack may end bad, due to the fact that you cannot escape without suffering the consequences - in the bet case scenario, you lose one maxed-out character.