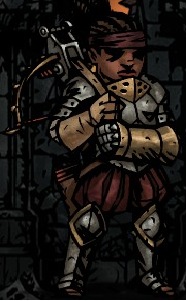 Arbalest is a class that combines properties of a damage dealer and of support class that offers a plethora of practical abilities to the party that both strengthen the party and weaken the opponent. This is a class that deals the highest damage in the game, although she needs some preparations for that (Marking the target). She has a high chance of critical damage, unusually high amount of health points (as for a character in her position and role), but her speed, dodge and resistances are quite average.

Unarguably, her strongest point is the Sniper Shot. In itself, it deals high damage and has a high chance of critical hit, but it is the most effective against a Marked opponent - thanks to this, she is capable of dealing as much as 100%(!), or more damage, with additional 10%(!) of chances for a critical hit. Arbalest is capable of killing the majority of targets in the game, in one take only. To mark opponents, you can use her own Sniper's Mark (which also decreases the target's dodge) - or you can mark the opponent with some other class (Bounty Hunter, Hound Master, or Occultist).

Arbalest has two abilities that have negative effect on the enemy party. Thanks to Suppressing Fire, she can deal little damage and decrease both the chance to hit and the chance of a critical hit of the targets you hit - against some types of opponents, this is invaluable.. Bola, on the other hand, lets her push two first targets away and wreak quite a havoc - some of the enemies cannot effectively attack from a row different from the one in which they initially appear (especially opponents that impose stress, and in this case they move forward).

Invaluable ability of this class is the Battlefield Bandage. It allows you to replenish some health points, a more important thing is that it increases the received healing by a percentage value. It perfectly harmonizes with Vestal/Occultist in the party, because it increases their effectiveness. Rallying Flare allows you to lift Marking from an ally and stun (especially useful against boss Swine), it provides a small bonus to Resistances to Weakening and raises slightly the level of the torch. Also, you should remember about Blindfire, which allows you to attack any target and, additionally, after it connects, it increases Arbalest's speed - unfortunately, the target is random here.

Arbalest works best (and only, as a matter of fact) on the 3rd and the 4th positions in the party, where she can use all of her abilities. She harmonizes perfectly with other healing classes (and also with healing abilities of other classes), also with those that can mark the enemy (or need her to mark the enemy).

The best position for the character is the rd and the 4th, where she can use all of her abilities, while staying outside of reach of majority of enemies.

Thanks to Sniper Shot, she is a perfect addition to the party whose focus is on Marking and dealing damage to marked enemies - this ability is also effective against targets that are hard to get (ones with high dodge).

This class is perfect for elimination of targets at the back of the enemy lines - especially ones that impose high stress on the party. High Accuracy and Damage of her Sniper Shot nearly always guarantees death of an enemy, from a single attack.