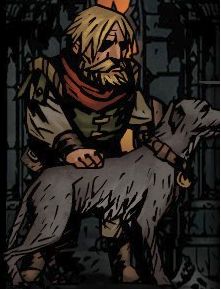 Hound Master is one of the most unique classes in the game, especially due to the fact that this is not a single figure and the character is always accompanied by his dog that performs the lion's share of the job. Hound Master is a combination of damage dealer and support class - he is quite self-sufficient because he can heal his wounds, as well as his own stress and the party's. He has quite a few health points, decent speed and quite high chances of critical hit, however his Resistances and "regular" Damage are average, at best.

When it comes to offensive abilities, the greatest advantage of Hound Master is his ability to impose Bleed. His Hound's Rush, apart from dealing massive damage to Marked opponents (up to 100%!) and to beast-type opponents, also has a high chance of causing bleeding. Hound's Harry is the only ability in the game that allows you to place a DoT effect over the entire enemy party, and although the regular damage that it deals is negligible, the Bleeding effect can quickly stack to reach sky-high values.

Hound Master's Guard Dog is similar to one of Man-At Arms's skills. After you select an ally, the ability allows him to absorb damage dealt to the target. Additionally, for the duration of the ability, the character receives a high bonus to dodge, which makes it more difficult to reach him. This is an excellent ability to use for the less resistant targets. Remember, however, that if the enemy reaches you even though, you receive full damage and not decreased - this may not end well.

One of the best abilities of Hound Master is Cry Havoc - this is the only ability in the game that lets you decrease stress levels of the entire party, at a time. This comes at a price of low success rate (65%), but with a bit of luck and persistence, you will be able to keep your party's stress at a non-existent level.

Also, his Blackjack is worth mentioning - this is a quite standard ability that deals negligible damage, but it has one of the highest chances of Stunning in the game. Also, you should remember about Whistle, which Marks the Target and decreases the target's defense by a percentage value (which depends on the level) - it works perfectly against armored opponents and some bosses.

Hound Master is a class that you can deploy in virtually any position, depending on what you want to achieve. In the 2nd position, he will be capable of using all of his offensive abilities, but if you want to use the ability that heals stress (Cry Havoc), you will have to move him to the 3rd or the 4th position, where you can use virtually any ability, with the exception of Blackjack.

The best position for this class is 3rd and 4th, where he can use virtually any of his abilities (with the exception of Blackjack), while remaining out of reach of the majority of opponents.

He is perfect against opponents that are vulnerable to bleeding, but you need to stay away from those that are resistant to this effect (e.g. Undead).

Thanks to Whistle, he works perfectly in a party that focuses on marking enemies and dealing damage to them - this ability is also effective against armored targets with high defense.

Unarguably, the best stress-healing class in the game - even though his Cry Havoc can be whimsical, due to its low chance of success.

Remember that each Hound Master goes to the mission with two pieces of hound snack. Activating this provides you with a bonus to effectiveness and damage dealt, for the duration of 3 successive turns - use it well.