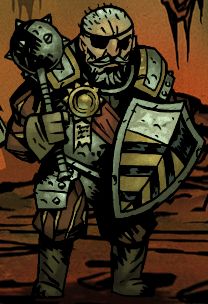 Man-at-Arms is a class that is best fitted to the role of a tank, mixed a bit with support class. The majority of his abilities allow him either to protect the party, increase statistics of party members, debuff or smash enemy lines. The high levels of health and dodge points come at the price of speed and resistances. Man-at-Arms has one of two (apart from Hound Master) ability called Defender. After an ally is marked, the skill allows him to protect them, thanks to which damage from all of the attacks on that character is absorbed by the man-at-arms. Additionally, for the duration of the ability, he receives a high bonus to protection, thanks to which he takes much less damage. This skill is perfect for protecting less resistant targets, also in combination with Retribution.

Retribution allows him to attack a target, deal negligible Damage, but Marks him at the same time and activates the passive skill Riposte. Each enemy that attacks him will be countered - as a result, when combined with the Defender mentioned above, he can attack several times per turn. However, you need to watch out, and not attract too much attention to him, especially of the enemies that impose stress.

Another skill that is attention-worthy is Rampart that stuns and pushes back the marked target, and also moves the Man-at-Arms by one position - it is useful against dangerous enemies, as well as in situations, in which your party is scrambled. Command and Bolster let him increase the Accuracy, Speed and Dodge of the entire party, during battles with some opponents, especially if you combine it with Bellow that decreases the Speed and Dodge of the entire enemy party.

Man-at-Arms works well on two first positions in the party, where he can activate all of his skills. Also, using specific Trinkets, you can keep him on the last position, where he works well as support that buffs his allies and debuffs his enemies. The Trinket in question is Guardian's Shield, which increases his defense, dodges and healing that he receives, when in the 4th row.

The best positions for this class are the 1st and the 2nd one from the front, which allow him to use all of his abilities.

He is excellent as the tank that absorbs damage dealt to the selected ally.

Retribution is a powerful ability thanks to which the character can perform as many as several attacks per turn, yet this may attract too much attention to him and expose him to higher stress levels.

You can also position him in the 4th row, where he will be buffing your party and debuffing the enemy. Effects are further increased by the use of Guardian's Shield trinket, which boosts his defense, dodge and received healing, while in the 4th position.