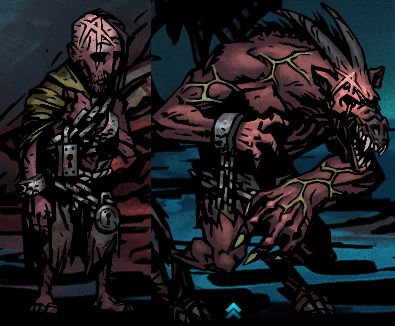 Abomination is a unique class, if compared with the rest of the classes. This is so, because he ha success to all his abilities already at the beginning of the game, as a result of which you do not need to spend money to test them all.

Thanks to his unique ability - Transformation - he can turn into a monster and gain additional statistics, while adding some stress for the party. Transformation is also connected with his abilities - in his human form, he can use 3 abilities and, as the monster, another three, thanks to which he can use all of his attacks during one battle. Also, it should be mentioned that the transformation is free and it does not cost him a turn. Still, he can transform into a monster only once and, after you return to the human form, you cannot transform again.

This class is perfect for fighting on the first or on the second position, where he takes on the role of the tank, as support, due to his ability to poison the enemy party. He has very good statistics and what stands out is the unusually high attack and speed values. There is one downside, though - he cannot be in one party with religious characters (i.e. Leper, Vestal and Crusader), which limits his usefulness.

If you want to use Abomination, it is a good idea to take Occultist, who will be capable of healing both him and the rest of the party, as well as Hound Master, who will be able to heal effects of transformation (stress), thanks to Cry Havoc.

The best position for this class is the second from the front, which allows him to use all of his abilities

Due to the fact that he cannot be on the party with Vestal and Crusader, it is a good idea to take Occultist along, who will be healing the party

His transformation causes stress to the entire party, which is why it is a good idea to take along Hound Master, who is capable of healing this (using Cry Havoc)

Remember that at any moment (once per turn)m you can change your form, thanks to which you can access the rest of the abilities - always plan on the next move to make