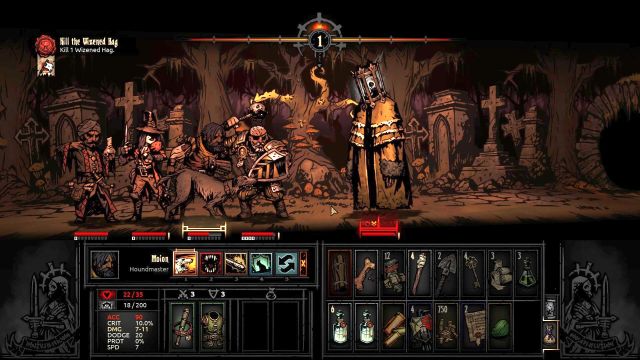 Collector, just like the rest of the bosses is a ghastly figure.

Collector is one of the minibosses in the game, which means that it is optional to fight him and he is not required to push the story forward, nor to unlock your access to the rest of the bosses. There is no one specific spot where you can find him. Still, throughout the tens of hours that you spend on preparing your party for quests in the Darkest Dungeon, you will meet him multiple times.

To make him appear, your inventory needs to be filled in, at least, 65% - which means that with 11 items in your inventory (regardless of how ma y of them you actually have - what is required is 11 stacks) each corridor that you follow has a 5% chance that the boss appears there. Of course, you can use it for your own needs (both to make him appear and to avoid him at all costs). If you want to lure him out, have the required number of stacks in your inventory and dash between corridors (even if you have already been there - sooner or later the boss appears).

The boss's initial attack is always the same - his first attack is Collect Call. After it is a activated, 3 heads of the defeated heroes appear in the battlefield. The game randomly selects from among the Vestal, Man-At-Arms, or Grave Robber. Apart from the boss, you also need to deal with the minions (which has been described below).

The above table presents all of the boss's attacks . 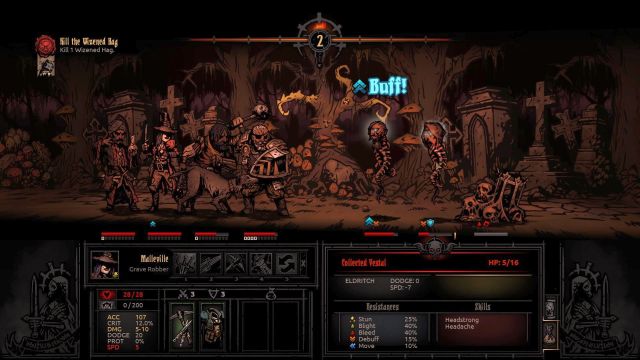 After you kill the enemy, it is a good idea to take some time off and regenerate your health/stress level.

This boss battle is quite unique in that you also need to take care of his summoned heads. All three use, in fact, one (two in the case of the Vestal) attack, and this is what it looks like:

Man-At-Arms will be trying to defend the boss, as a result of which he uses Defender. From now on, he will be taking damage decreased by a percentage value, which would normally be dealt to the boss. To smash this ability, you need simply to stun this character, which deactivates this effect - but in the following turn he will be trying to activate it again. In himself, he poses no threat to you

Vestal - to a major extent, she uses quite average (especially if compared to damage dealt by you) healing abilities which restores the enemy some of his health points. You do not need to worry about this too much, because damage you deal should surpass the healed points several-fold. From time to time, she also casts a buff. Just like Man-At-Arms, she poses no threat, in herself.

Grave Robber - this is the most dangerous opponent. His attacks can deal quite massive damage (especially in the case of critical attacks - which happens often). If the enemy summons two such heads, they will be capable of killing a single party member during one turn.

As proved by the above list, during the fight (apart from attacking the boss) you should completely ignore both Vestal and Man-at-Arms (just remember to smash his defenses imposed on the boss) and kill Grave Robber (or Grave Robbers, if you have bad luck). Each time, after two heads disappear from the battlefield, and the boss takes the 1st or the 2nd position, he uses Collect Call again.

This way, you can cause a situation, in which only heads of Vestals Men-at-Arms' heads appear in the battlefield, as a result of which damage dealt by the enemies drop to nearly zero. As a matter of fact, this is also the best tactic here, because you then do not need to worry about the powerful attacks of Grave Robbers.

The rest of the boss's attacks are not too dangerous - his Life Steal heals only a tiny fraction of the damage that you deal and Show Collection imposes on you very little stress. Try to eliminate heads of Grave Robbers, smash protections of Men-At-Arms' on a regular basis and deal consistent damage to the boss. What is effective against the Collector are attacks that impose Bleed or Poison effects - the boss has low Resistances to these, which makes it easy to impose them and eliminates any healing abilities of the enemies. Also, it is a good idea to use, quite often, stunning abilities, to which the enemy is also vulnerable - this is especially effective in the first turn, which delays his summoning of the heads and lets you deal considerable damage.

It is difficult to recommend a good make-up here, because the encounter with him is rather random, but it pays off to remember about several issues:

Make sure that you have, at least, one character with stun ability, who can target the 1st, 2nd or the 3rd row - this will be helpful at stunning the boss in the first turn, or at stunning the Man-At-Arms.

Do not enter fight with the boss with a party in made-up to deal Damage over Time - the key here is to eliminate Grave Robbers as quickly as possible, and this requires high damage dealt. A perfect choice is your own Grave Robber, Hellion or Bounty Hunter.

Do not ignore Grave Robbers! One turn of distraction may cost you a valuable character - their damage cad exceed 30 points at one take.

Do not waste time on regenerating stress when the Collector is still alive. In the first place, deal with the boss and Grave Robbers, because the amount of stress that you receive during the battle is negligible.

After you kill the boss, it is also a good idea to deal with Vestals/Men-At-Arms - they are incapable of wounding you in any way and you can use this time to regenerate your health, or to bring down stress levels. Just remember that there needs to be more than one enemy in the battlefield - otherwise you receive damage from stress for the entire party, every several turns.