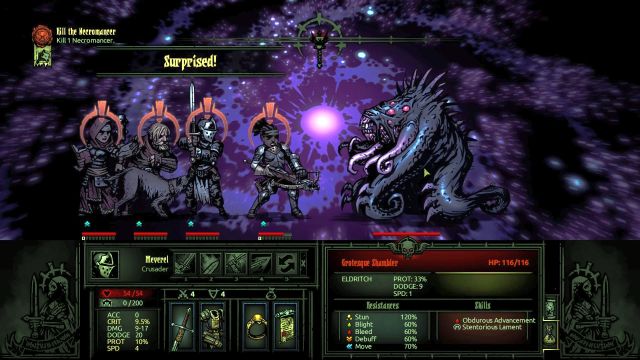 This boss fight always starts with rearrangement of your party.

Shambler is the second miniboss in the game (just like Collector) and, at the same time, one of the most difficult battles in the game, especially if you do not prepares yourself properly beforehand. You do not need to defeat him, in order to push the story forward, nor to match up against other bosses. Also, you cannot fight him in the regular way, by selecting the appropriate mission.

There are two ways in which you can find the boss and fight him:

There is very little possibility that you encounter him randomly (as a random encounter), while exploring the dungeon with the lowest brightness level (set to 0).

You can summon the monster on your own, by putting the torch on his altar (Shambler's Altar), or on Curio, which you can sometimes run into while exploring the dungeons.

Definitely, you will be surprised about brightness level during the battle. The brightness level needs to go down to 0 and it is impossible to increase it - you need to fight Shambler in total darkness and there is nothing you can do about it.

The battle is unique in that there is nowhere to escape from him - if you decide to retreat during the battle, your next encounter will be with Shambler. The only way out is to defeat the enemy, or escaping the mission altogether - unfortunately, penalty for this is high and the party receives a high stress level. Apart from the fight with the boss, you also need to fight with his tentacles which, paradoxically, are probably more dangerous than he himself.

The above table presents all of the boss's attacks . 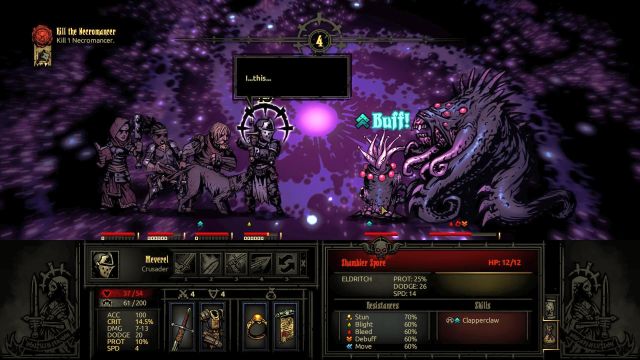 With each attack, tentacles become stronger and stronger.

Effective fighting and defeating Shambler depends both on preparations and on the tactic that you adopt. In the case of the rest of the bosses, you can focus on gradual draining of the opponent's health bar and keeping the party alive. This is not the case here, because apart from dealing considerable damage, the boss's attacks also impose high levels of stress on your party consistent attacks on one of your characters throughout several rounds is enough to make his stress levels exceed 100 points.

This happens because attacks of the enemy's tentacles impose high levels of stress, and their Clapperclaw ability has a quite chance of critical hit, which amplifies the effect (fighting in total darkness also does not help here, as it also imposes stress). Therefore, you need to keep fighting the tentacles on a regular basis - see below to learn more.

Your job here consists in:

Quick elimination of his tentacles.

Shambler has very low Resistances to Bleed and Blight, which makes him vulnerable to those effects. Thanks to this, he ill be taking 15-20 damage per turn, depending on your level - since he does not have the ability to heal, several turns of such damage and regular attacks from your party should get the job done.

Another issue here is the elimination of tentacles. As a matter of fact, he keeps summoning them again, but the key issue here is to prevent the same set of tentacles from staying in the battlefield, throughout several successive turns. The reason is simple - their attack, Clapperclaw, apart from the high level of dealt damage (and stress) imposes buffs on the tentacle, which enhances their chance of critical strike, their damage dealt, speed and protection. With each successive turn, its attacks will be stronger (with increased chances of critical damage and additional stress), and they will be more resistant to attacks. After two turns of receiving buffs, such tentacle can deal as much as 20 damage (and there are two of them).

A good party to fight Shambler consists of:

Plague Doctor - she is capable of imposing powerful effects on the enemy (4-5 points per turn), which is useful during the battle with Shambler, and for elimination of his tentacles.

Houndmaster - two of his abilities impose Bleed which, just like in the above case, will be useful during the battle. Additionally, his Whistle decreases the target's protection (which increases damage that you deal to Shambler) and Marks him, which increases the potency of some of abilities.

Hellion - she deals considerable damage (and her Iron Swan can weaken the boss by as much as a quarter of his health!) and is capable of imposing a strong Bleed effect on the boss. Additionally, the Barbaric YAWP stuns two targets in the front rows, which may be helpful if damage dealt by the tentacles will get out of hand.

You can allow yourself freedom, as for the last character, but it is best to pick someone that can deal high damage to enemies in the front two positions (where tentacles usually are). Therefore, the Leper is a good choice, then the Hellion and the Grave Robber(who can also impose Bleed effect).

A party like this should easily be able to deal with the enemy, but since you can encounter him while exploring the dungeon in a totally different make-up, you need to remember about several issues:

Give up reducing the character's stress level - the enemies will be able to exceed the previous level (even 20 points on the majority of the party, per turn), and each turn, during which you do not deal damage to Shambler, brings you one step closer to defeat.

The fight always starts with rearranging your party. Therefore, try to have on your party characters that can move quickly around the battlefield - some abilities, such as Hellion's Breakthrough, Grave Robber's Lunge, or Abomination's Slam.

Use the numerous Camping Abilities that decrease stress levels that you receive - this way, you can extend the duration of the fight a little.

Do not allow a situation, in which the same set of tentacles stays in the battlefield for longer than 2 turns - the longer they are there, the higher the bonus to Clapperclaw that they receive and your party cannot fight them.

If not necessary, do not enter a fight with Shambler at the beginning of your exploration of the dungeon - the chances are high that, after the fight, the majority of the party members will be exhausted (especially when it comes to stress levels), due to which you will have to retreat from the dungeon. If you turn into Shambler's Altar, remember its location, complete the quest and return there to enter the fight with the miniboss.