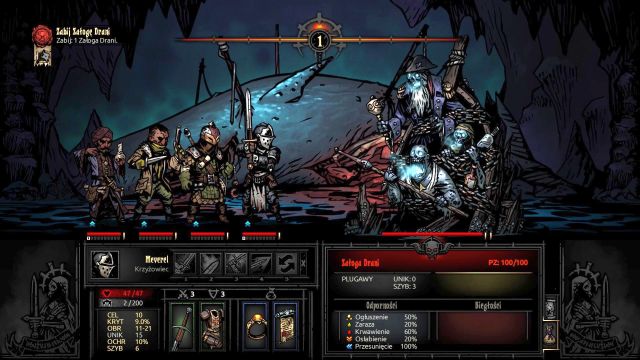 Drowned Crew is the second boss (after Siren) that you need to defeat in the Cove. This is yet another battle that is quite unique, in that it requires a specific approach, if you want to win it. As soon as it starts, the enemy uses attack "All Hands on Deck", which summons Anchorman and pulls a random player character (if it is impossible to resist) to the front of the row. In the next turn, the opponent with the anchor attacks the character that is standing at the head of the row and pin him to the ground.

From now on, that character will be taking stress every turn, for as long as he is pinned down. Additionally, the boss receives a boost to Protection, while the Anchorman is attacking. Therefore, you need to deal with him as quickly as possible - fortunately he does not have too many health points, thanks to which it is going to be easy to deal with him, which deprives the boss of additional protection. Remember, though, that the pinned-down character can also attack.

Your task is to defeat the boss and, in the meantime, to deal with Anchorman, who will be summoned back, more or less, for a round, before you kill him. It is worth remembering that he is easy to be stunned, which postpones his attack by a turn. There is no point in attacking him with regular attacks, unless he grabs one of your party members, because he will then have high Protection that absorbs all of the damage dealt by you.

The above table presents all of the attacks available for the boss. 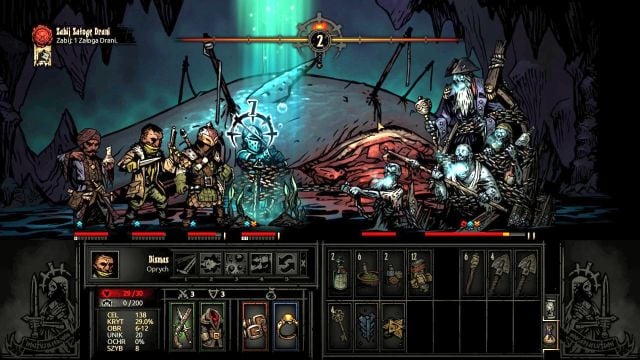 Anchorman nails one of your characters to the ground - kill him to free that character.

Drowned Crew must be the easiest boss battle in the game, especially at lower difficulty levels. The enemy does not have any attacks that could threaten you in any serious way, if your party is well-prepared, and unlike other bosses, it does not impose that much stress on your party.

During the fight, you have two goals - attacking the boss to bring down his health points and killing Anchorman. The other one is important since the boss is healing himself each turn that your character spends immobilized, which if combined with resistance from Anchorman, can make the battle unnecessarily long. As soon as Anchorman immobilizes your character, kill him and turn to the boss.

IN himself, the boss has low resistance to stun and poison, but it is better not to try to exploit the former, - the boss moves three times each turn, due to which stun will wear off so fast, it will have no effect at all. Poison (or bleed, if your character can impose them on the boss) on the other hand, can deal tremendous damage, due to the fact that he moves 3 times a turn. This means poisoning for 4 points and bleeding for 2 equals 18 damage received by the boss, during a single turn!

A good party for fighting the Drowned Crew can consist of:

Crusader - he deals high damage to rows 1 and 2, which is where the boss, or Anchorman, is usually staying. Additionally, his Stunning Blow has a high chance of stunning the enemy, which may be useful against Anchorman.

Bounty Hunter - he can stun the enemy and his attacks, especially against Marked targets, deal high damage.

Highwayman - high Accuracy, damage dealt and the chance to land a critical attack enable him to deal high damage to the enemy. One pistol attack can make Anchorman bite the dust.

Occultist - he can weaken the boss with Vulnerability Hex and Weakening Curse. Additionally, he can mark the boss using his abilities, which makes attacks of the Bounty Hunter more effective.