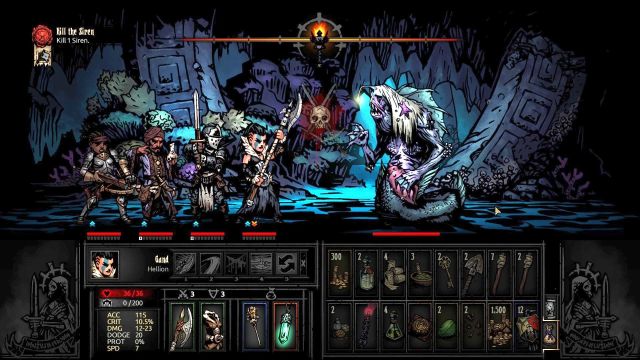 Siren is not as beautiful as one would expect...

Siren is the first boss of the Cove. The opponent starts the battle alone and takes up the first position. The Siren's most dangerous weapon is the ability to pull a character over to her side (with the Song of Desire). The effectiveness of this ability is predefined and in most cases, it ends in a success.

After the Siren performs this action, a player's character is pulled over to the other side for several turns, as a result of which they get out of your control and the character deals damage to your party. Fortunately, the character then uses the simplest attacks, thanks to which you do not need to fear Poison or Bleed effects imposed on the entire group. For the duration of the character's stay at the other side, they will be receiving damage from stress - although it is not too high, prolonging the battle with the boss may have dire effects, because stress may reach critical level quickly. After several turns, your character returns to you side and takes the last position in the row.

The above table presents all of the attacks available for the boss. 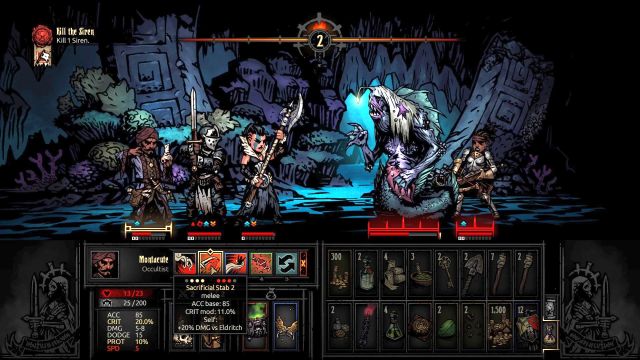 Although it may look differently, the battle with the Siren is one of the easiest in the game. The boss does not have any lethal attacks that would impose any negative effects, or huge amounts of stress onto your character. The main ability of the enemy - Song of Desire- in spite of its high chances of success, is possible to be dodged (or resisted rather). This is influenced by the Weakening of the character - the higher the value, the higher the chance of success. You can increase it with trinkets, or by drinking Holy Water before the battle - if you consume it, in any form, it increases all Resistances for each character, by 33%, and that including the one that you currently need.

If the enemy manages to pull one of your party members over to her side, this is not a disaster. The character will be unable to use the strongest of their attacks and you can also stun the character, which decreases their effectiveness. Also, you can use an ability that pushes the character to the back, behind the Siren- in the case of, e.g. Leper, this disables his attacks completely.

Siren has quite a high chance of Dodging (especially at the higher difficulty levels, thanks to which it is better to take along characters with high Accuracy, or attacks of high Accuracy. Of course, you can decrease the Siren's Dodge value (e.g. with Arbalest's Mark of Sniper). Additionally, the opponent is vulnerable to stunning - you can, therefore easily stun Siren every 2 turns (and for one turn she loses her +40% to her Resistance to Stun), and which decreases her efficiency by a half.

If you want to impose effects with AoT on her, it is a good idea to take interest in Poisoning, because the Siren has quite high a resistance to Bleed (although Hellion can easily impose this effect on her).

A good party to fight with Siren can consist of:

Crusader - he deals very high damage to 1st and 2nd row, which is where the boss usually is. Additionally, he has an ability (Stunning Blow) that has high chance of turning the opponent.

Hellion - she deals quite a damage and she is capable of imposing Bleed effect on the opponent. Also, she can increase her accuracy and damage dealt, thanks to which it is easier for her you actually hit the Siren.

Occultist - He can weaken the Siren with Vulnerability Hex and Weakening Curse, and some of its attacks deal damage to Eldritch monsters that the Siren belongs to.

Arbalest - high Accuracy, Damage and chance of critical hit ensure that Arbalest is capable of dealing considerable damage to Siren. Lack of any Protections in Siren only enhances the effect.