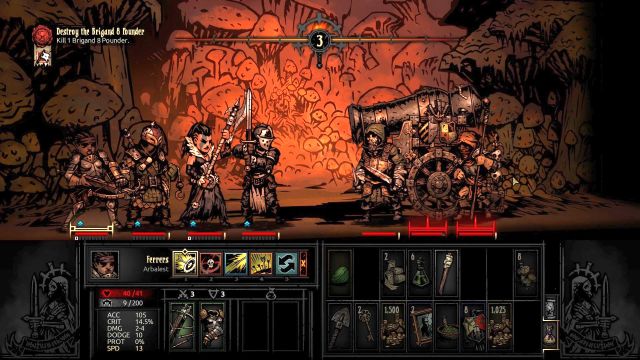 The boss and his minions in all their glory

Brigand Pounder is the first boss that you are going to face in Weald. The opponent always stands behind the summon at the head of the formation (unless you kill the summon, in which case the boss moves to the front) and just like any other major boss in the game, he will be sending his soldiers against you.

In himself, the boss is specific in that he cannot even hurt you - he is going to need help to land either of his two attacks. This is what the third attack is for - Reinforcements, thanks to which he is able to summon, as many as three soldiers into the battlefield, including your main target that you always have to fight in the first place - Matchman.

He deals practically no damage, and thanks to him, the opponent can launch his main attack - "BOOOOOOOM!". The attack deals tremendous damage to your entire party (it is capable of draining 2/3 of each of your characters' health!) and it additionally adds 15 points of stress to each character that gets hit. Pounder can use this attack only with the help of Matchman (who activates him) and the activation itself always takes place at the end of the round, because Matchman has a very low level of speed and always is the last one to move. There also is a third attack "MISFIRE!", which sometimes supplants the regular "boom" - the shot is never accurate and it does not regenerate the stress of your party, but it is not a good idea to rely on that.

The above table presents all of the boss's attacks - values separated with the "/" symbol provide effects depending on levels (1, 3 and 5), at which you are going to fight this opponent. 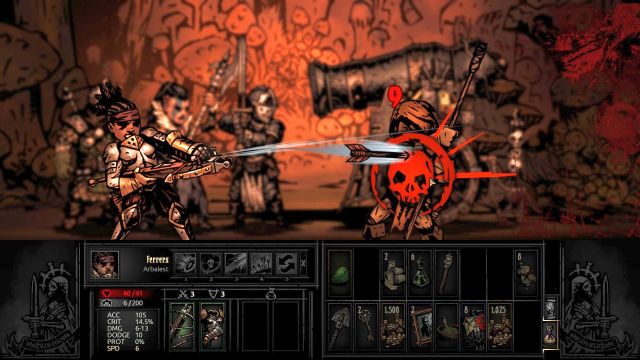 As you can figure it out, there is no point to take with you characters that impose various DoT effects, because the resistances of the boss are high and chances to cause bleeding or blight in him are minimal. He does have a high level of protection, but this is specific for the fight - it will take some time to complete it because your attack are going to deal 2-3 damage.

The suggested party should include characters that can easily target the 3rd and the 4th row of the enemy party, because this is where the threat, i.e. Matchman, usually is. You need to kill the opponent at any cost, before the round is out. Of course, there are other enemies that appear there with him, and it is also a good idea to deal with them - one, or two attacks on each will do and the boss is incapable of summoning 3 minions at a time. Therefore, the tactic is that each round you beat up Matchman and his companions, and aim the rest of the available attacks at the boss. After a dozen-or-so turns the fight will be over.

Crusader - he deals high damage against rows 1 and 2, where usually the boss and one of the summons are

Hellion - while on the first position, she can easily damage the entire enemy party, including the 4th row, while dealing high damage.

Bounty Hunter - he is virtually capable of attacking any row and his Mark for Death decreases the boss's protection by 10% (this effect can be stacked), if only it is successful.

Arbalest - at the very end of the formation, she is capable of attacking any opponent, and deal one of the highest damage in the game. An accurate shot should make Matchman bite the dust.

Actually, any character will do here, as long as they deal physical damage, instead of damage from poison or from bleeding. Just remember that your party should be capable of attacking every row of the enemy lines, thanks to which you get Matchman quickly.