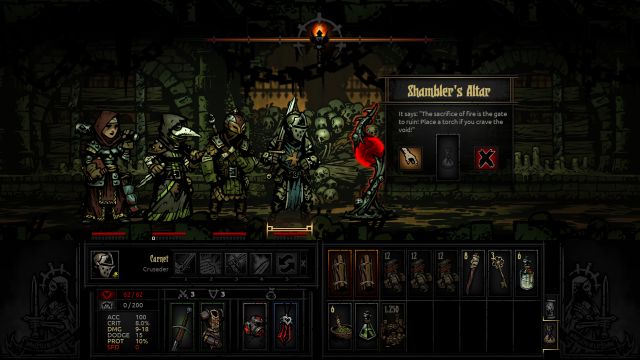 Shambler's Altar is one of the things that you shouldn't touch if you aren't ready.

Curio are special, random generated objects in the dungeons with which you can interact. They differ from regular chests, barrels and boxes (which can, but don't have to contain an item and don't punish the player in any way) as they can contain basically all items, curses, sicknesses and negative effects that can affect the characters. 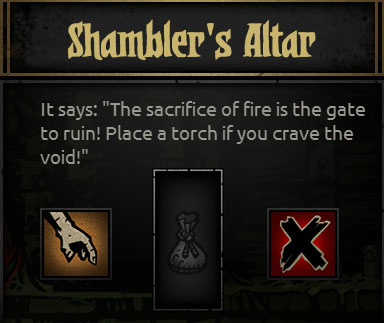 You can use an item on each Curio - depending on what item you use you can obtain various outcomes. Most Curios have one item that can be used (few of them have two and there are ones that aren't affected by an item), they can be also opened without an item, but in that case you will have to face the consequences. Activating these objects might end in:

Curio is an interesting mechanic, but you should think twice before opening each of them - very frequently the potential valuable reward can change into a serious penalty for the team (for example increasing the stress of a character by 100 points, causing it to panic and fighting the rest of the team, which will force you to escape from the mission). There are Curio that can be opened with no worry and there are ones you should keep yourself away from.

Remember that no Curio can give you two effects at once - each effect is counted once. Also remember that you can activate some Curio without an item (for example the ones that can infect the character with a sickness) if the character that does it have high resistances. In that case, even if you get a "bad luck", the effect will not be placed. Sadly, there are no resistances to Quirk in the game, so keep away from objects that add only negative Quirks.

In the further chapters you can find a list of Curio available on a specific territory, items to interact and rewards they offer.