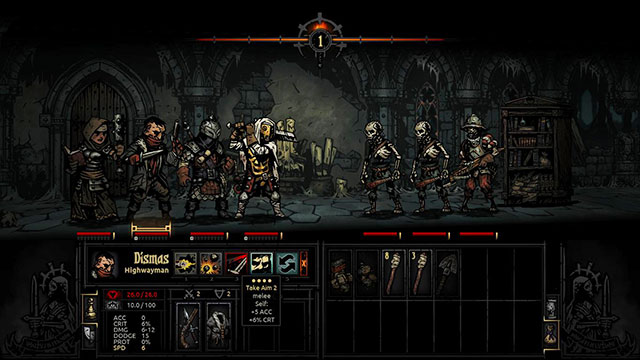 A frustrating situation especially at the beginning of the game

The fighting is another basic and also an inseparable part of the DD. Every mission is granted to have at least some monsters inside. In order to survive those encounters you will have to, again, learn the basics. Fortunately, they aren't too complicated...at least at a first glance.

The order of movement

The battle starts when you encounter an enemy. Your team enters the combat mode and will always be on the left side of the battlefield, while the enemy group takes the right side. The order of movement depends on the Speed attribute of all the combatants - the higher it is, the quicker a character will move in a given round. Additionally, aside from the character's speed parameter, a number ranging from 1 to 8 is randomly picked and added to the speed attribute - the final value is the number that determines who will move first. The speed is counted after each character moves (not at the end of the round) - it means that it can be influenced all the time by various buffs and debuffs, as well as the randomness (the 1-8 draw described above).

The order of movement is also influenced by the element of surprise. If the player surprises the enemy team, his / her team will always move first - if, on the other hand, the player team is surprised, it does not necessary mean that the enemy will move first, just that they will be given a few extra points of speed during the first round.

The course of battle

The maximum number of the characters in the line is 4 and they are always placed in a way in which the front is filled. It is of high importance as because of this you can move the enemies from the back to the front where they won't be able to use most of their abilities and also they will be an easy target for your party.

The important mechanic is the process of creating corpses - after killing most enemies in the game, they won't disappear completely, as their corpse will take the spot they stood in. The corpse has a portion of the original enemy's health, it loses a small amount of that each round, and when it's "killed", it will disappear from the battlefield - as long as the corpse lies there, it will block the field like a normal unit. A corpse won't be created if the enemy was killed by a critical hit, or from bleeding / blight damage.

A thing worth noting is the fact that the movements of both player and enemy units are mixed - thanks to that, you (mostly) won't run into a situation in which one of the sides acts few times in a row and the opposing force can't retaliate.

The fight ends when all of the enemies/heroes are dead or when you will command a retreat order (flag on the minimap).