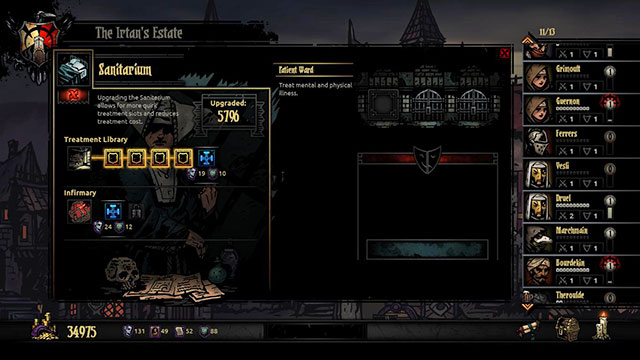 The Sanitarium allows you to remove the selected negative quirks off your heroes. The whole process resembles the one used to decrease the stress of your heroes. The hero is placed in one of the free slots, where you can select the quirk you want to get rid of, and then the hero undergoes the treatment, which in turn makes him inaccessible for the next week.

Besides that, you can also "lock" a positive quirk in almost the same way as you use to get rid of a negative one - after selecting a hero and highlighting the positive quirk, a yellow padlock will appear near the quirk, which symbolizes the whole process. Remember that you can remove a negative quirk and lock in a positive one simultaneously, allowing you to save a lot of time.

Additionally, the Sanitarium allows you to get rid of those pesky diseases, which your heroes are guaranteed to attract during their journeys - it's immensely worth to do so, as the effects of diseases are often way more severe than those of negative quirks. The whole process is very similar - you put a hero in the Infirmary, and he/she will come back a week later, free from the selected disease.

Decreases the costs of removing negative and locking in positive quirks.

Decreases the costs of removing diseases.

Increases the number of slots in the Treatment Library and the Infirmary.