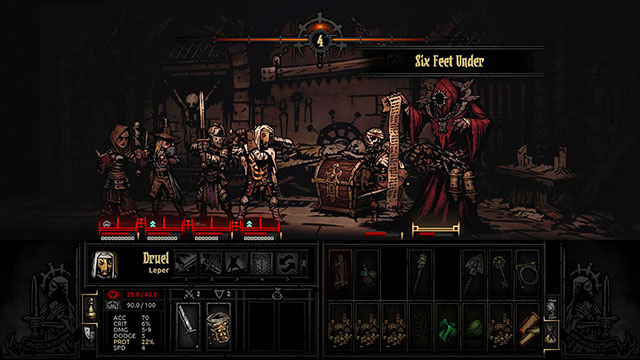 Necromancer with his animated skeletons

Necromancer is a ranged sorceror who can bring to 'life' the undead. All of his skills are AoE attacks, (Area of Effect) which will either attack two, or all party members. Each skill of the Necromancer's summons one undead (up to three) in front of him. The last thing to take care of is his Six Feet Under skill. It doesn't inflict much of a damage, but it highly increases the stress level of the whole party. It is best to start this fight with very low stress levels.

It is vital to take two classes for this fight: Crusader and Bounty Hunter/Occultist. The first will do great as a tank and also he will deal additional damage to the undead (and there will be quite a lot of them). The latters will be necessary because of their Pull abilities which will enable you to bring the Necromancer to the front. Let the Crusader deal with the minions whilst the rest of the team will be attacking the Necromancer. Keep your heroes' life on a high level. The Flesh is Willing has got quite a big Chance of dealing the critical damage which may take most of the Hp's from your party.