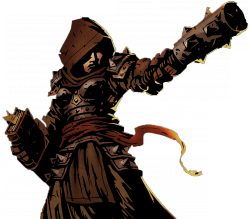 Vestal is simply a priest, which works great against the undead. Vestal can also heal and buff the party which is her main purpose on the battlefield. She may heal one target as well as the whole party a tonce. As a healer, she works great in nearly every combination of classes.

Although her healing abilities are not as potent as that of Occultist, they are more reliable - you can be pretty sure about receiving the healing value. Vestal has two healing abilities - Divine Grace, which allows her to heal lots of Health Points to one target, and Divine Comfort, which heals the entire party. The latter one, throughout the first two ranks is not worth too much, but later into the game, with appropriate trinkets, each party member receives between 6 and 12 Health Points. Also, this is a perfect ability that saves the party from Death's Door, even if it heals 1 Health Point only.

Vestal has a very good ranged ability, Judgement, which deals decent damage and, additionally, heals Vestal if she manages to hit the target. Also, Dazzling Light, thanks to which you can stun the enemy, as well as Illumination, which decreases dodge of the target, are both attention worthy. Both of the skills also increase torch level. Finally, Hand of Light, which decreases damage dealt by enemy and deals increased Unholy damage, deserves too be noted.

Vestal works well in the 3rd position, but thanks to some trinkets, she can do just as well in thee 2nd one, where she can use more offensive abilities. She matches great with other healing classes, such as Occultist or Arbalest. Her statistics are well balanced - she does not stand out, nor does she lag behind.

The third position works best. From there, Vestal can use most of her attacks and spells. With appropriate trinkets, he can also stand in the 2nd row, where he can land more powerful attacks.

Vestal can use two strong healing skills. The first is Divine Grace, which heals for more HPs but it can be used on a single target. The latter is Divine Comfort which heals for less, but it affects the whole party. It is a great skill in the situation I which more than one of your teammates is impaired with the Death's Door.

The Judgement is one of the best offensive skills which attacks an enemy and restores the Vestal's HPs.

Vestal is equipped with the skills which will restore the torch light. The Dazzling Light and Illumination, can do that whilst inflicting damage upon an enemy. Use it for the longer quests to conserve your torches.