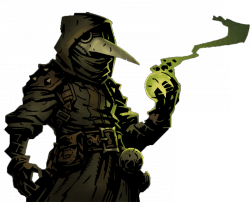 Plague Doctor is a very interesting class without an exactly specified role. His attacks are based mostly on the negative effects such as Bleeding and Blight, which impair the enemies and slowly damage them. The PD has got also some healing and buffing skills but they are not as strong as other classes' skills. Although his offensive skills also come with some negative effects against the enemies, they're too weak to kill them within a short time. Because of that, the PD works best as a support, also because of his ability of removing the negative effects from his teammates.

Plague Doctor is the best in the 3rd row, where she can hurl her deadly grenades from. Thanks to Noxious Blast, she can poison the 1st or the 2nd target and thanks to Plague Grenade she can do that to the 3rd and the 4th target simultaneously. Both grenades deal massive damage starting with the 1st level - 4 points per turn that goes up to reach 6 per turn. This effect is, of course, stack-able, thanks to which the enemy can take the astronomical 18 points per turn! In the case that Plague Doctor encounters an enemy resistant to Blight, she can perform Incision, which apart from high damage (and a high chance for a critical hit), imposes the bleeding effect on the enemy.

Blinding Gas is just as important an ability and it provides you with a high chance of stunning two targets at the enemy's back (rows 3 and 4). In combination with Hellion's Bellow, this provides you with an opportunity to stun the entire party within one turn - this is why both of the classes cooperate well. If necessary, she can also stun and pull to the front one opponent, using Disorienting Blast.

Plague Doctor also has strong supporting abilities. She is the only class in the game that can remove poisoning and bleeding from another target (while in combat) and additionally heal several Health Points - all of this thanks to Battlefield Medicine. If it is necessary to deal more damage, you can perform Emboldening Vapours, which increases the target's speed and damage dealt.

Plague Doctor is a character that harmonizes well with several other classes - Hellion among others (this enables you to stun the entire enemy party), or Hound Master (who causes Bleeding in targets, while she is poisoning them). This works well against monsters with high resistance, but she does not do well in situations where you need to deal high damage quickly, or when enemies have high resistances.

The best position for him would be the third. From there, he can use the Incision skill, which is his only ability which does not have any negative modifiers to damage.

Although abilities Noxious Blast, Plague Grenade and Blinding Gas have very low base damage, they can impose highly annoying negative effects on targets. The best targets for these skills are the bosses and tougher enemies.

Plague Doctor has got one of the best skills for crowd control- Disorienting Blast. It can move the enemy from the 2nd, 3rd or 4th position to the other, random one.

His only healing skill, the Battlefield Medicine, may not restore many HPs but it may remove some negative effects (Bleed or Blight) from your party member. It may be useful in the longer battles.