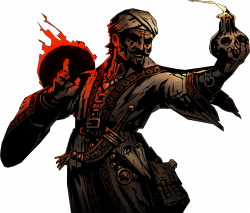 Occultist is the Darkest Dungeon's sorceror. This is a magical class that fights from back rows and deals massive damage to enemy units. He can not only deal damage to the enemies, but can also move them in various ways. He can also heal his teammates. However, it had to be paid and in his case it have emasculated in his HPs and negative effects that come with his skills.

The key upside of the Occultist is additional damage dealt to Eldritch - this comes in handy while exploring some dungeons, especially Cove, where the majority of monsters (with the exception of boss Drowned Crew) are of this type. The last location, Darkest Dungeon, is predominantly crawling with this type of monsters, so he will be useful throughout the majority of the game.

His two curses, i.e. Weakening Curse and Vulnerability Hex make him one of the best support classes in the game. The former, in combination with Vestal's Hand of Light, can drive down damage of any opponent with out any problems - it is invaluable in the fight against boss Prophet, who deals lethal damage, as well as against any other opponent that is capable of landing powerful blows. The latter, on the other hand, works perfectly in parties focusing on dealing damage to Marked targets - Occultist's high speed will usually let him take action before the rest of the party, mark the target beforehand and also lets him deal more damage.

Wyrd Reconstruction is a double-edged ability, which can heal target, for up to 30 Health Points per take (in the case of critical hit), but it can just as well not heal even one point and impose the pesky Bleed effect instead. For this reason, Occultist should never be used as the party's only healer, especially at higher difficulties.

The best position for him would be the third. From there, the only skill he won't be able to use would be the Hands from the Abyss and even then all it takes is to move him one place forward.

Use the Weakening Curse ass well as Vulnerability Hex, in order to weaken the most dangerous targets. The first skill will decrease the enemy's damage and his accuracy whilst the latter imposes a Mark on him which will decrease the target's dodge chance.

Occultist is equipped with a powerful healing skill - Wyrd Reconstruction. It can restore up to 10 HPs, but it also may impose the Bleeding on the target, although there is a chance to resist this negative effect. The problem, on the other hand, is the fact that it may not heal even one point, due to considerable divergence in values.

Deamon's Pull is on of the best skill which will change the order within enemies' lines. It can pull an enemy from the third or fourth position by two positions. It is a great skill to use against the ranged enemies - especially in the case of enemies that deal damage from stress, who often cannot use their abilities in the front of the formation.