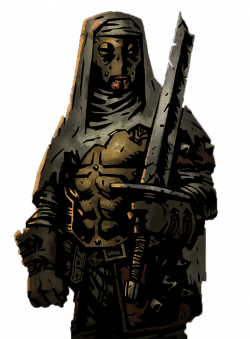 Leper is very self-sufficient. He takes the role of a tank or a damage dealer. He has got lots of HPs, a big resistance and quite good base damage. He can also use his buffs to reduce his stress, boost or heal himself. As for his flaws - he does not have any ranged attacks whatsoever, thus he cannot be placed further than on the second position. He also will not be able to attack an enemy who will be standing on the third/fourth position.

Inarguably, the greatest weakness of Leper is his low accuracy of offensive attacks, due to which he misses often. This is compensated by the high damage he deals, and you can improve on his accuracy using other abilities, trinkets or with his Finale (unfortunately, everything comes at a price and it decreases his defensive abilities).

This character has one of the most powerful "moving" abilities in the game - his Purge can move the opponent as far back as 3 rows, and move the character from the first row to the very back, which often makes him incapable of attacking. If, in the first two rows of the enemy party, there are warriors that deal high damage, you can use Intimidate, which decreases his accuracy and damage dealt.

Thanks to his extraordinary abilities, Leper is perfect in the first line of fire. This effect is further boosted by Withstand (which decreases his stress and provides with a considerable boost to defense)and Solemnity, which increases his resistance and restores quite a few Health Points. Unfortunately, he is completely useless in missions, where enemies may use "moving" attacks - he is completely unable to attack, nor return from the 3rd and the 4th row and he needs to "go on foot".

Leper may be considered as the best tank in the game, thus it is best to use him specifically in this role.

This class has very good healing and boosting abilities, but they only are effective on self. Use Solemnity to restore some of your health and load the main healer, as well as for the boost to resistance, and Withstand, which heals a little bit of the character's stress and increases his resistance for a short period of time.

All of Leper's offensive abilities are of relatively low accuracy, which is a good idea to use Revenge before the attack, which increases damage, critical damage and chances of hitting with the rest of the attacks.

Beware of the position changing when having a Leper in your party. He can attack only from the first two positions and moving him to the back will make him totally useless. Try not to combine this class with mobile characters, such as Grave Robber or Jester.