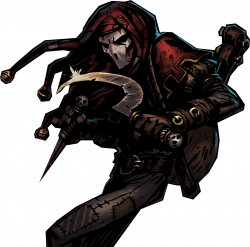 True master of relaxing melodies and slicing through the enemies' flesh. His durability limits him to the rare positions and even then he can't be used as a damage dealer. However, the source of his power can be found in his tunes.

Jester has the strongest buff in the game - Battle Ballad. Each use lets him play a melody that increases, speed, accuracy and chance of critical hit in the entire party. This effect can be stacked up to 3 times , which at higher levels provides a bonus of +15 to speed, +30 to accuracy and +9% do chance for a critical hit, which makes your characters, in practice, twice as effective in combat. Even a onetime, use of the ballad provides you with a considerable boost and allows your party make their moves before the enemy does - this means less damage taken and less stress for your characters.

You should remember about Inspiring Tune, Jester's another song, which heals the character's stress and decreases its amount that he receives, for the next several turns. This is the strongest ability in the game that heals stress of a single target (sometimes, it is difficult to rely on Hound Master's ability). Also, he can impose bleeding, using two abilities.

Just like in the case of Grave Robber, Jester can be used as a support party, while deployed in the back rows of the party, or as a mobile havoc wreaker. His Solo allows him to dash into the front row and decreases accuracy of the enemies considerably - which in combination with his high level of dodge lets him avoid enemy attacks. While in the front row, he can use the strongest offensive ability in the game, Finale. In spite of the fact that, after he uses it, he returns to the very last row of the party and receives a high penalty to statistics, this attack can kill the majority of enemies in one take, and due to the high chance of a critical hit, it can also replenish some stress.

Jester is a unique character that works with specific groups. If you want a party whose main objective is to kill out enemies in the initial turn, you will find no use for him. However, if you want someone that will considerably strengthen the party, he is a perfect match.

Jester is best to be placed on the third position. From there, he can play his tunes and use the most of his attacks.

Thanks to ability Battle Ballad, which buffs attacks of the entire party, this class is perfect for parties with strong offensive side. Classes that harmonize with Jester well are, e.g. Highwayman, Grave Digger, Leper and Hellion.

This class is great when it comes to dealing critical damage. Use abilities, such as Dirk Stab and Slice Off which have positive modifiers to critical attacks. Use Finale to finish out the last targets, thanks to which you avoid adverse effects of this attack.

Characters in this class are perfect for longer journeys, thanks to their Inspiring Tune, which heals stress in a single target and increases his resistance to stress.