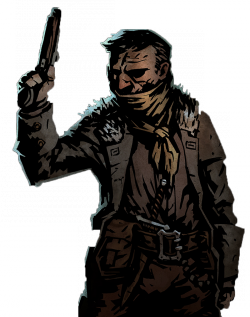 Highwayman is also a class which can be described as a rogue. He focuses on dealing the damage and inflicting some negative effects upon the enemies. He can attack both melee, with a dagger, as well as from a distance, well as with the pistol. He is very good in the offensive role, and he also has got a decent control over the battlefield. These, along with a nice resistance rates, makes him a hero which is suitable for nearly every kind of party.

Highwayman can fight in any position and always deal massive damage. This makes him a highly mobile class that harmonizes well with, e.g. Grave Robber, or someone that can mark targets (e.g. Hound Master or Arbalest).

Each melee attacks can be thrown from the back, thus you can put him on the second or third position.

The Point Blank Shot is a very powerful skill with a Knockback effect. However, it requires placing the Highwayman on the very front. This can be achieved by using his Duelist's Advance skill, which will move him there automatically whilst attacking any enemy.