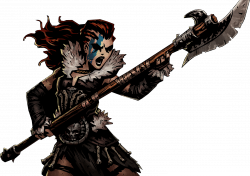 A jagged glaive wielding Hellion stands for a barbarian class in the game. She uses very aggressive attacks, sacrificing her defensive stats in order to gain more damage. She is the best to be placed as the second from the right where she will not receive too much of a damage. There, she will also be able to get rid of the negative status effects and debuffs.

If you are in need of a character for harassing the last row in the enemy lines, Hellion is your best choice. While deployed in the front row, she gains access to Iron Swan, an ability that deals massive damage to the enemy in the 4th row. Often, one attack is enough to make the enemy bite the dust.

Hellion has reliable attacks that deal decent damage, nut they sometimes are slightly problematic when it comes to accuracy. This comes at a price - three of her abilities (Barbaric YAWP, Breakthrough and Bleed Out) weaken her for the next 3 turns, by decreasing her dodge and damage.

One of the most interesting of her abilities is the abovementioned Barbaric YAWP, which lets her (with a very high chance of success) to stun two enemies in the 1st and the 2nd row. This, in combination with Plague Doctor's stun grenade lets you stun the entire enemy party in two moves. A nice addition is Adrenaline Rush, which increases her accuracy and damage, heals Blight and, additionally, it heals several Health Points.

This character is perfect in parties that need a someone to wreak havoc in the last enemy lines, or which simply require brutal force. This character has a decent amount of Health Points, good resistances and speed, but it somewhat lacks in terms of accuracy and chance of critical hit.

Place here in the front, in the first or the second place so that she will be able to use most of her skills.

Hellion has got a quite powerful AoE skill, Breakthrough, which can attack 3 enemies at once. Remember though, it gives the Hellion a short debuff which decreases her damage and dodge stats.

Use the Iron Swan to attack an enemy in the back. They are usually an easy target for the Hellion as they don't have much of the resistance.

If you want to restore your party's full health before the end of the battle, get rid of all the enemies, save the last two ones, and start casting Barbaric YAWP! On them, which allows you to impose Stun on them, in an easy way, while dealing no damage to them. Use those several turns to your advantage and heal the party with healing spells.