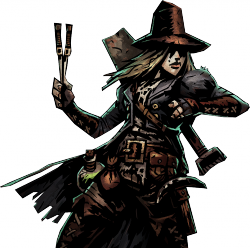 Grave Robber is a class of a high mobility. It is very similar to the archetype of a rogue as this class combines the very swift melee dagger attacks with ranged dagger throwing. This class can be used differently depending on the skill combination, but mostly it should be used as a damage dealer. GR can move on the battlefield without passing the turn, thus she don't have her favourite position (although the second and third from the right are the most preferable).

If you want to, you can use him, though, as a more stationary character. Abilities such as Pick to the Face, Flashing Daggers and Thrown Dagger let him attack all of the targets in the battlefield. Both dagger abilities can deal massive damage, due to high critical hit chance. However, he is much better as a mobile class, but this works best within a party where the rest of the characters also use it. Therefore, he harmonizes perfectly with Jester, Highwayman, and, to some extent, with Crusader.

This character has a very high speed, high chance for a critical hit and quite high dodge value, but the amount of his Health Points and resistance (apart from resistance to Blight) are very low.

Use this class only in the party which members do not have to keep their positions. You do not want to disable one of your members for a turn because of using a GR's attack.

Use the Lunge and Shadow Fade, in order to stay mobile on the battlefield

Class can be used as a "dodging tank", which is a tank, who dodges the attacks instead of taking them on itself. However it works only on the higher levels, when the GR's stats of dodge are higher.

Classes that harmonize best with Grave Robber's mobility are Jester, Highwayman and, to some extent, Crusader