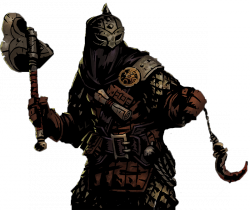 Bounty Hunter is the best when it comes to controlling the positions in the battlefield. He prefers fighting in the front rows, especially in the second one, where he can use all of his abilities, except for Uppercut. This class focuses on the damage dealing and causing the negative effects to appear within the enemies' lines. Because of that it does not make him the best tank, although he can be placed in this role when he is armed with the right skills and equipment.

Bounty Hunter's key abilities are Mark for Death and Collect Bounty, and these are the ones the playing as the character should be based on. The former, apart from Marking the target, lets you decrease the target's protection (PROT) by a huge amount, which is invaluable later into the game, because there are many enemies that are highly resistant to attacks, exactly thanks to this. Collect Bounty, on the other hand, deals massive damage to the marked targets, and also to Human opponents. A single attack against a marked target can deal as much as 50-60 points of damage and make the opponent bite the dust.

Another unarguable upside of the character is that he has as many as two abilities that can impose Stun, and both of them let you rearrange the enemy lines- one of them moves the target to a random position, whereas the other one moves the target to the back row. Thanks to this, you can pull forward those of the enemies that are lethal in the back rows (e.g. ones that deal damage from Stress), and are helpless in the front lines.

This class is perfect on the second and the third position, where he can access the majority of his abilities (he can access them all on the second position), but the best one is the second position, which gives you access to Uppercut, a powerful stunning attack that, at the same time, pushes the enemy away by 2 fields. If, however, you want to focus exclusively on dealing damage (because this class is relatively susceptible to attacks), deploy the Bounty Hunter in the 3rd row.

The best position for this class is the second one from the front, where he can use all of his abilities, but if you want to focus on dealing damage (by means of Collect Bounty and Mark for Death), deploy this character on position 3, where he is more safe.

Try not to use him as the main tank, as he has no base protection. This class, if you do not need the ability to move the opponent away, works best at the 3rd position - there, he can use the most effective of his attacks is safe from the majority of opponents in the battlefield.

If you want to use this class, it is also a good idea to select Arbalest, Hound Master and/or Occultist for the party - all of these have a Marking ability, which increases the effectiveness of the Bounty Hunter.

Use the Come Hither, Uppercut and Flashbang, in order to change the order of the enemies. Moving ranged opponents to the front will prevent them from using the most powerful of their attacks. Some of the melee enemies won't be able to attack you at all when positioned in the back.