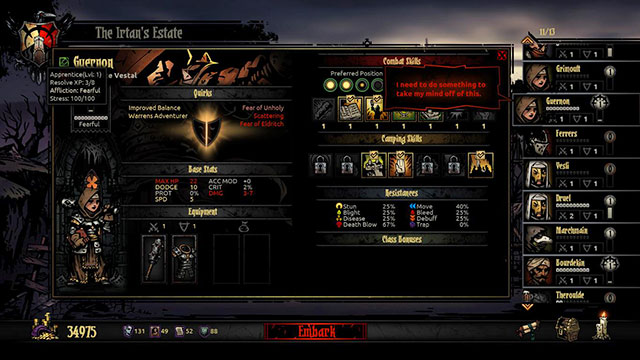 Stress is one of the crucial mechanics in the game. The whole title is based around this concept. Oppositely from the HP, the base stress is fixed on the 0 and it grows through time.

The level of stress is measured on a scale from 0 to 200, and its effects manifest themselves in two ways - when the hero's stress goes beyond 100 points and when it reaches 200. In the first instance the character will be given a random affliction (mainly a negative one, but you can increase the chances to get a positive one, a virtue, with trinkets), which will immensely influence the further course of the mission. A negative affliction will give a huge amount of stress to the entire team, and will influence the character as well - it can either have its attributes decreased, won't be listening to your commands, will be inflicted random damage, or won't be getting any benefits from camp buffs.

In the case of a positive affliction (virtue), the character has a chance to get a powerful boost to damage, its amount of stress will decrease drastically (which can also decrease the stress of the rest of your team), might heal some of its wounds and / or increase the effectiveness of your whole team. Additionally, the character will be immune to heart attack for the duration of the mission.

When the level of stress reaches 200 points, the character will have a heart attack, killing it instantly and causing a huge amount of stress to your entire team. What is even worse, a single heart attack can cause a chain reaction of others as well, killing multiple characters in a row - that is why you should never let it happen.

The level of stress can be reduced slightly by doing various actions while traversing the dungeon, or decrease it significantly by sending your hero to rest at the Tavern, or the Abbey. Additionally, you can also heal your character from the negative affliction while still in the dungeon - all you have to do is to decrease the stress of that particular hero to 0.

Examples of actions which increase the stress level:

Examples of actions which decrease the stress level:

Additionally, there's a new mechanic connected with stress. Some of the enemies are capable of inflicting the "Horror" status effect. Once applied, the hero will receive stress damage every turn, up to three turns. The effect can be stacked and inflicted on multiple heroes at once and can quickly overwhelm your entire party if not taken care of. The effect can be cured with Laudanum, a new provision item that can be purchased before embarking on a quest (as well as found in the dungeons).