On this page of the guide, you can find a list of all bosses that you'll encounter during your adventure with Cult of the Lamb. We also supply practical tips how to fight Bishops effectively.

Amdusias is the first boss met in Darkwood region. He is not a particularly demanding opponent and has a small number of health points. During the fight, remember to avoid his charge attacks which are signaled by his silhouette lighting up . It's best to focus on reducing Amdusias's health as quickly as possible, while ignoring the minor enemies.

Stay mobile at all times during this encounter, as Valefar's multi-directional projectiles can make the battle harder . Also, watch out for the moment when the enemy is signalling his death from above. Another attack involves firing deadly projectiles which are signaled by an exclamation mark appearing over his head. Once you get the cue, quickly move away to the edge of the arena to avoid damage.

Barbatos is the third boss in Darkwood region. This enemy likes to burrow underground, digging tunnels and leaving a trail of spikes that you must avoid.Keep attacking him with Curses, as ranged attacks work best here . When you run out of Fervour, carefully approach the enemy to deal him with a few melee blows, and then move away to a safe distance. 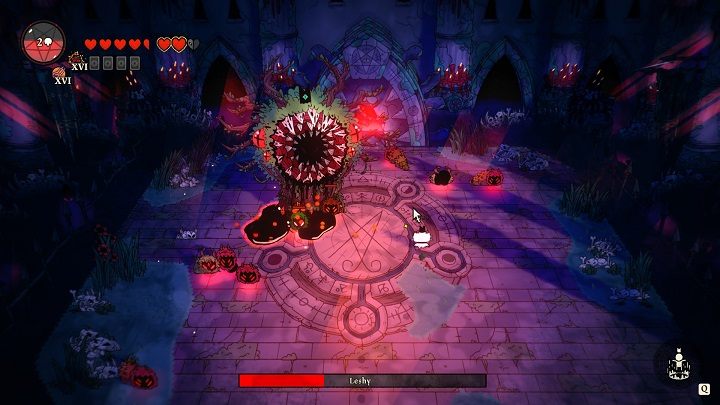 Leshy is the ruler of Darkwood and the first Bishop you will face. Here are some tips on how to beat him :

Gusion appears in Anura. The enemy lays eggs that hatch into frogs - if there are too many of them, you may get swarmed by minor opponents. However, it is best to focus on Gusion completely and defeat him as quickly as possible while attacking additional opponenets with AoE curses.

The second boss in the Anura area fires insect projectiles that home toward your character. You can destroy incoming projectiles with any attack . The second type of projectile is indestructible, requiring you to be constantly on the move and approach the boss from time to time to deal damage.

The fight with Zepar is quite similar to the one with Gusion. The movement patterns of the two bosses are similar, but Zepar has some explosive projectiles up his sleeve that deal AoE damage . However, they can be easily avoided, because, as the bomb lands, the game displays the blast radius. 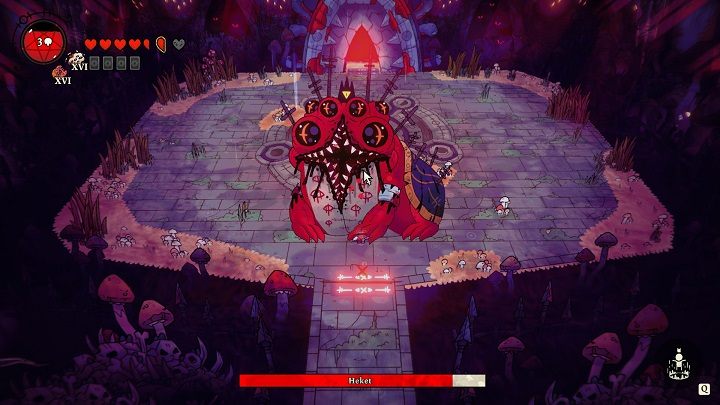 Heket is the final enemy in the Anura region. When fighting him, there are a few things that you need to remember:

Saleos is the first boss you'll meet in Anchordeep. Watch out for the spikes he shoots out of the body. This opponent is quite fast and sometimes you may have problems keeping up with him - the way to go is to stay on the move, deal damage and dodge.

Haven has a troublesome attack in form of fire rings that can only be avoided by performing a dodge at the perfect moment. He often summons minor enemies - kill them as soon as they appear, refocus and attack the boss.

Baalzebub employs similar tactics as Harborym. As soon as he finishes a series of ranged attacks, quickly jump to him and land a few blows . Blast and Spatter Curses work well here. 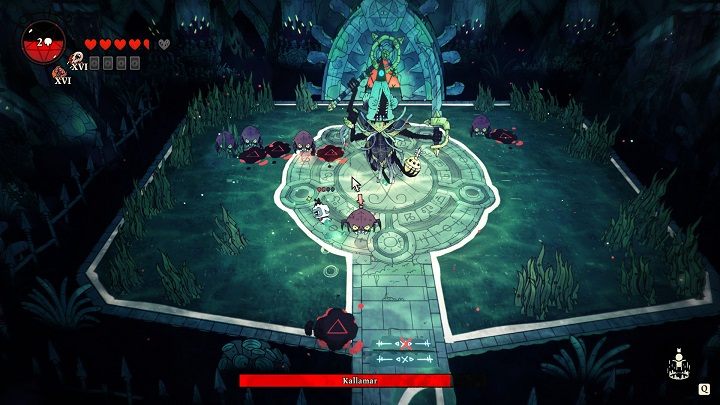 Kallamar is the third Bishop you will face. The fight is quite difficult, so it is worth remembering about a few aspects :

The first boss in Silk Cradle is Focalor. It's best to use as many Curse attacks as possible and stick with hit-and-run tactics. You need to sense a right moment to strike. Watch out for the charge attack and AoE blasts.

Vephar fires projectiles that poison your character, so try to avoid them at all costs. After you land a few melee attacks, immediately retreat, because the boss's body will start to grow spikes . As soon as they disappear, repeat the attack and escape pattern.

Hauras is fond of firing projectiles of various range, frequency and speed, so staying on the move is a must. If you stay close to him for too long, you can take severe damage from melee attacks . Make the most of your Curses, then use a series of short blows. 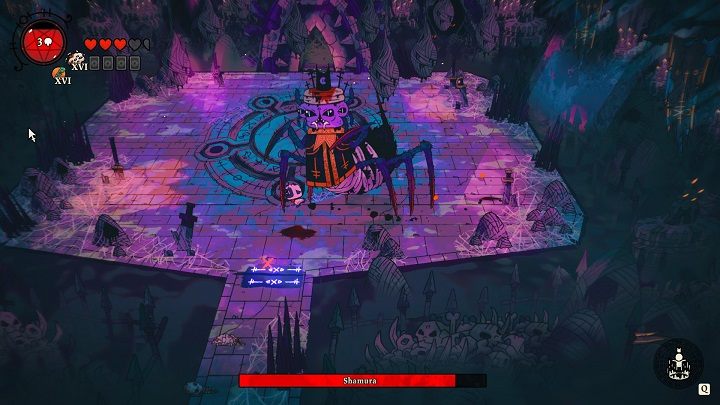 Shamura is one of the toughest opponents in the game, so there are a few tips to remember: 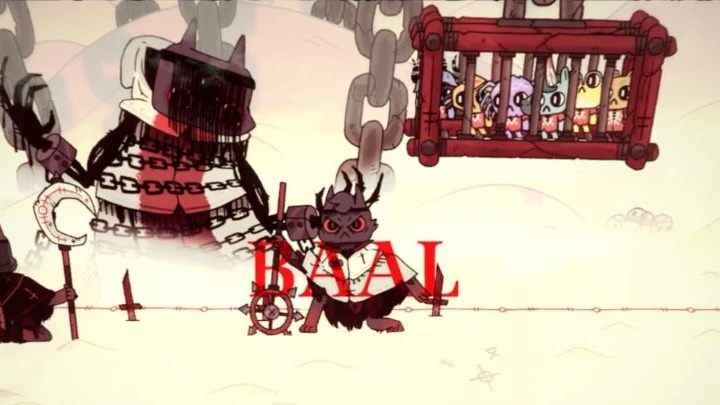 The duel with Baal is not particularly demanding, as the enemy has a limited number of moves. First of all, you need to watch out for his melee combo and spikes that spread to four sides in straight lines, or one that willl home towards your character. All you need to do is dodge at the right moment and return with a few combinations to defeat Baal. 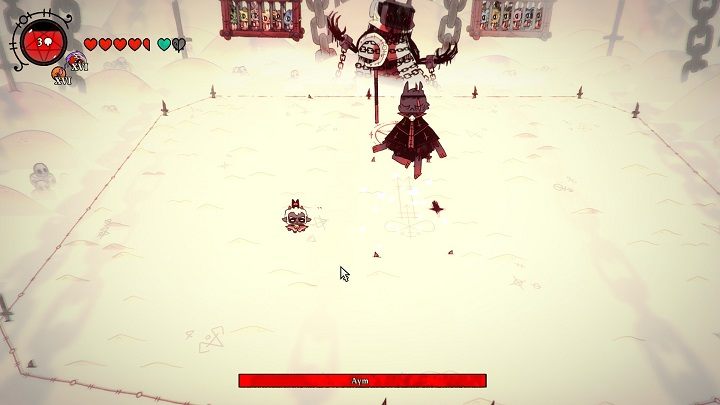 Aym's moveset doesn't differ much from the one of Baal's. This time, spike attacks take the form of three shots in straight lines, and the tracking variant is a bit faster. From time to time, Aym will fire a series of missiles, but avoiding them is easy. A combination of melee attacks and Curses will quickly lead you to victory .

The One Who Waits (Final Boss) 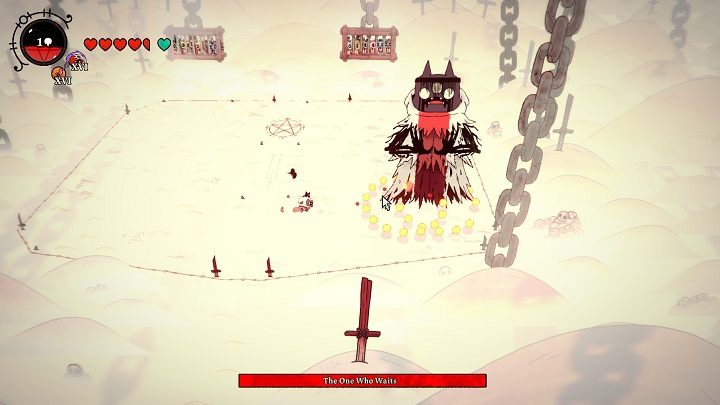 The fight against The One Who Waits is divided into two completely different phases, in which the boss takes different forms and uses different attacks. 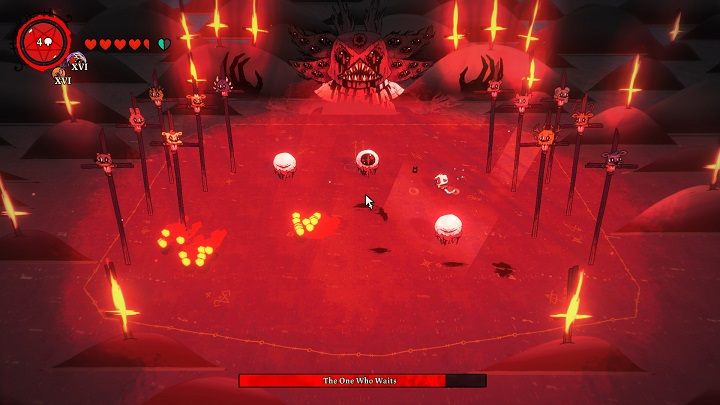