This is going to be your final challenge. As you've probably suspected, you will have to destroy a huge alien vessel. You were able to see it before, so you won't be surprised by the fact how big it really is. Don't even think about using your standard guns. You will have to follow a certain procedure. Just make sure that you're fully equipped. Wait for your first task. 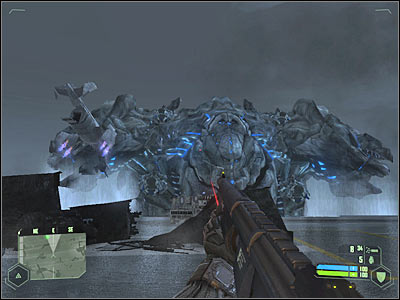 I would recommend hiding behind one of the larger objects. You should be standing somewhere in front of the mothership, because you will have a lot of supplies around you. The first phase of this boss battle will require you to destroy FOUR turrets. Look at my screen if you're having some difficulties finding them. They are also going to be marked on your personal map. 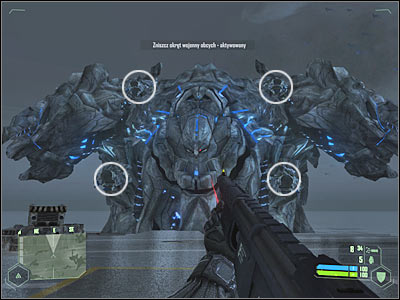 You may destroy the turrets in any order. Obviously you will have to focus all of your attention on neutralizing them. Avoid the main attacks of the boss at the same time, including a very powerful freeze ray. You can't get caught in the crossfire, because that would make you an easy target. As for the weapon, you could use a minigun, however rocket launchers are a much better choice, especially since you'll find a crate filled with these weapons. Additionally, one missile should be more than enough to destroy each turret. 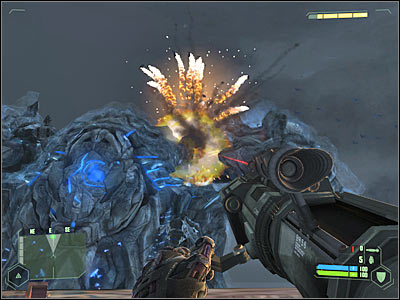 Destroying the turrets was very easy. Now for the hard part. First of all, you will have to allow your teammates to weaken one of the side wings of the mothership. Start shooting at the smaller alien creatures in the meantime. There's going to be a lot of them. You won't have to kill all monsters, however try and take out as many of them as possible. You could also use camouflage to avoid them, however you would have some problems with them later during the course of this mission. As a result, try and get rid of most of them. 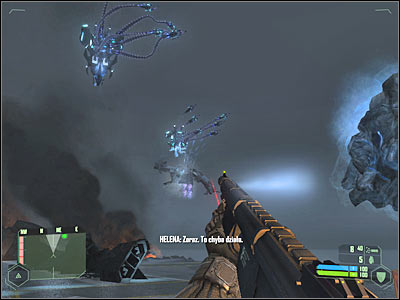 Make sure that you're using larger objects for cover while trying to take out enemy creatures. You will also have to avoid being hit by the freeze ray of the mothership. You will have to continue with your attacks until one of the side sections of the war ship has been weakened (screen). Activate camouflage and get ready to attack the mothership. 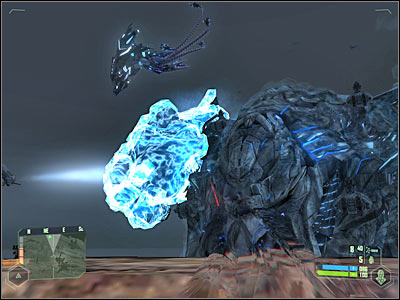 Choose a TAC cannon from your inventory. You weren't able to use it before, but now's your chance. You will have to be aiming at the weakened side of the mothership. You'll probably notice that a power bar has automatically appeared on your screen. Allow the cannon to fully charge itself. Use a camouflage, so you're not interrupted. 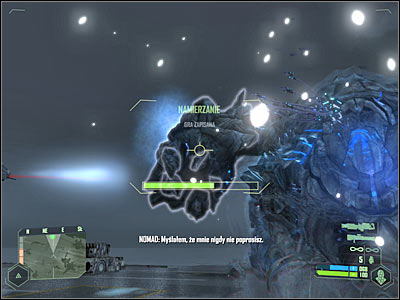 Wait for the power bar to reach maximum value. Once this is done, press the left mouse button in order to fire a single round at the mothership. If you've done everything according to the plan, the right wing is going to be destroyed. Now you will have to go back to defending yourself against enemy attacks. 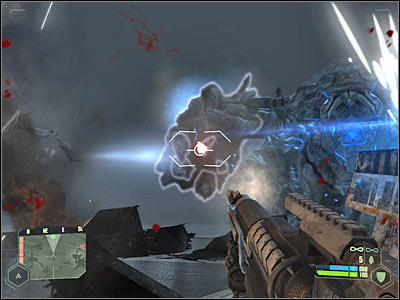 Your allies will try to disable the other wing of the mothership. Wait for their signal. Activate your cloaking device and start aiming at the wing with your TAC cannon. Just as before, you will only have to fire one projectile. Now you should consider moving to your left. Hide inside a destroyed VTOL. You should also pick up a new rocket launcher, as well as ammunition for the minigun. 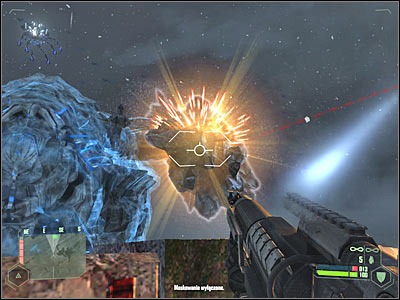 The alien mothership should begin moving. This is going to make your life more difficult, especially if you've avoided smaller creatures before. Your first task here will be to destroy a central hatch of the ship. Look at the screen if you're having some problems figuring out what it is. The easiest way to destroy it would be to fire at least two missiles. Thankfully, you won't have to go back for a new rocket launcher. Keep hiding near a destroyed plane. 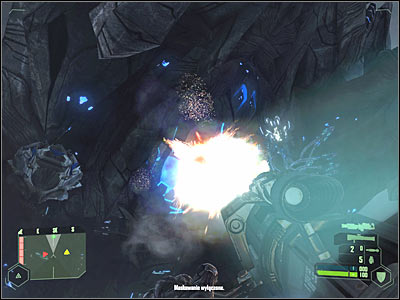 Now you will have to choose a TAC cannon from your inventory. Start aiming at the central (and unprotected) core of the ship. Wait for the power bar to reach maximum value and fire a projectile at the mothership. If nothing happens, repeat these actions. The final result should fully satisfy you - alien mothership is going to be destroyed. 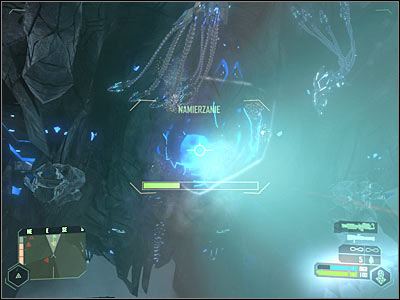