On this page you will learn the most important aspects of choosing a ruler. First of all, we will focus on the characters suggested by the developers, grouped into several "main scenarios". Then we will discuss the most important matters that should be considered when choosing one of the hundreds of characters available in the game. At the end, you will find a short list of rulers with the most interesting gameplay mechanics on particular difficulty levels.

In truth, Crusader Kings 3 doesn't include a clearly distinct story campaign. So when you decide to play as a local warlord from the depths of the Mongolian steppe, you get exactly the same opportunities to create a story as if you were playing as the king of England or the ruler of the Holy Roman Empire. Still, the differences in the details of the gameplay mechanics and the situation on the map can vary significantly from character to character, which translates into the difficulty level. For this reason, the developers selected a few, in their opinion, interesting characters for the players to choose from without having to tediously dig through the entire main map.

These characters have been grouped into six "main scenarios" of the game, according to the historical period and events. It should be noted that the term "main scenarios" is a bit of an exaggeration, because, as I mentioned, playing as these characters is no different from the other rulers and it doesn't add any additional story elements. Nevertheless, it's worth taking a closer look at these characters, if only because several of them will be a good choice for both novice players as well as those looking for interesting historical circumstances. 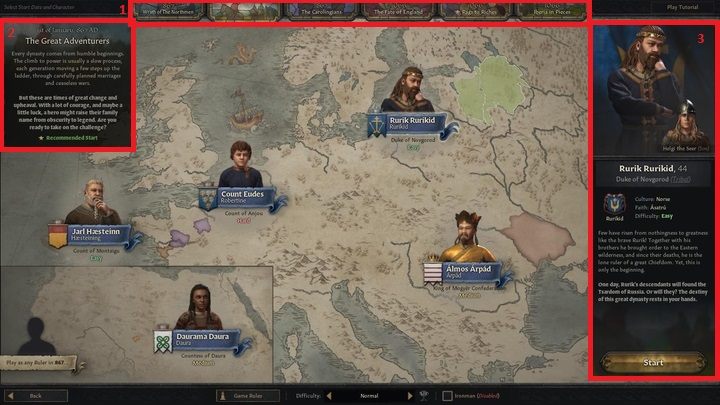 After entering the main character selection window, at the top of the screen you will notice six tabs (1). These are the "main scenarios" of the game. The first three from the left of the screen begin in 862 and the next three in 1066. Upon clicking on one of the tabs, the portraits of the characters available in the given scenario will appear on the map, while in the upper left corner, you will see a short historical overview (2). After selecting one of the characters, on the right side you will see their description (3) containing standard information and a historical note that may be helpful in finding out about the situation and defining the first goals of your campaign. 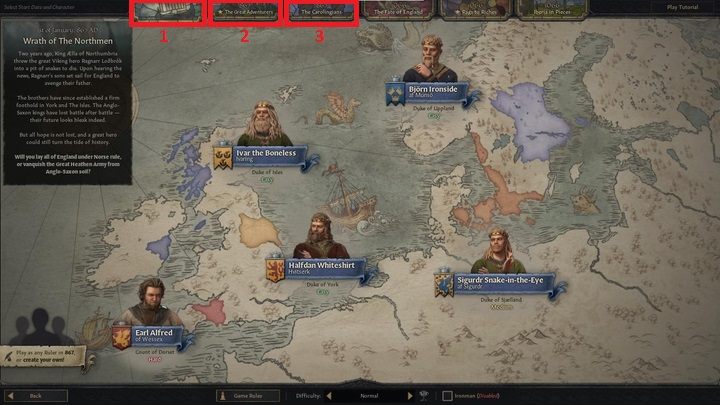 The first scenario from the left is the Wrath of The Northmen (1). It takes place in the Viking era and allows you to assume the role of, among others, one of the then leaders descended from the legendary Ragnar Lodbrok. You can select between characters such as Bjorn Ironside and Ivar the Boneless, as well as the leader of the Saxons - Earl Alfred. In most cases, if you select one of the leaders of the northern peoples, you will play on the easy difficulty level. However, if you want to try to stop the raids as Earl Alfred, the task will become significantly more challenging. The Great Adventurers (2) is a scenario that offers a whole range of interesting characters from continental Europe during the second half of the IX century. The ruler of Novgorod Land, Rurik Rurikid, deserves special mention, as he is an excellent choice for beginners. From the historical perspective, another interesting character is Almos Arpad, the ruler of Hungarians, who at this stage of history were still a nomadic people. The final scenario set in this historical period is The Carolingians (3). It's the story of the descendants of Charlemagne, who, having divided his empire among themselves, gave rise to the contemporary world of Western Europe. This scenario is intended for players who already have some experience with Crusader Kings 3 and you will have the opportunity to establish the Empire of France or the Holy Roman Empire, among others. 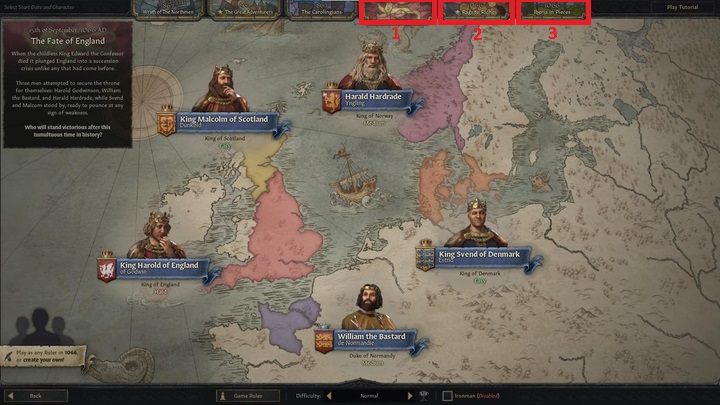 Moving on to the year 1066, you can finally decide the fate of the British Isles in The Fate of England (1) scenario. This time, you will have a whole range of interesting historical figures at your disposal, including the famous Norman ruler William the Bastard. As in Wrath of The Northmen, characters attacking the British Isles have a slightly easier task than the defenders. Rags to Riches (2) offers another selection of outstanding European rulers, this time from the mid-11th century. Particularly noteworthy is Duke Vratislav of the Czech Republic, who's an especially good choice for novice players. Another intriguing historical figure is undoubtedly Duke Robert Guiscard, the Norman ruler of southern Italy. The final scenario,Iberia in Pieces (3), allows you to try to unify Spain. Interesting characters are available on each of the difficulty levels.

Each of these scenarios will place you in a different historical context, but this will in no way limit your fun - you will still have access to all functions and the entire campaign map and the gameplay always ends in 1454. The game still retains its sandbox elements, so nothing prevents you, for example, from choosing a Viking leader, then completely skipping the British Isles and attempting to conquer the Iberian Peninsula.

What to pay attention to when choosing a ruler

Despite the fact that the game doesn't include a dedicated story campaign, the choice of ruler is critically important, if only due to the initial conditions of the game. If you decide to freely select a character (the Play as any Ruler button), you will get a fully interactive gameplay map with a lot of useful information that is worth paying attention to. 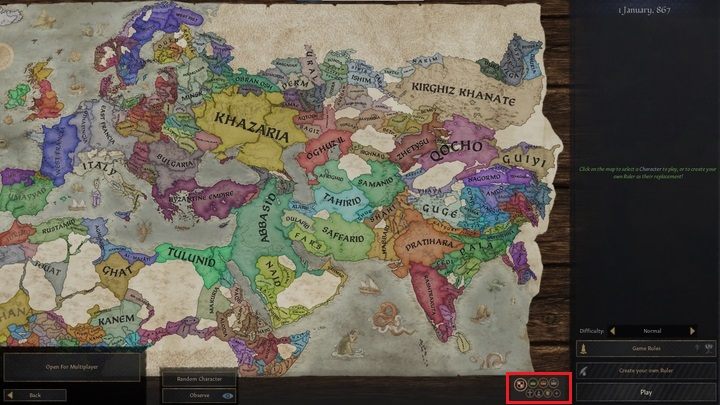 The free character selection screen in 867

Using the icon set located in the lower right corner, you can choose between different map modes, which will allow you to get an idea of, among other things, the distribution of religion and culture. In this aspect, you can be guided by your personal preferences, but remember that individual religions and cultures may have specific gameplay mechanics. A Viking who believes in the old Norse gods will see some things differently than a Christian or Muslim ruler, and this may have a direct impact on the game. 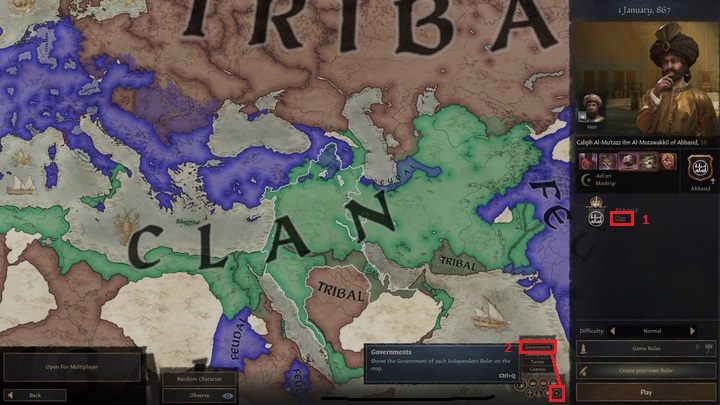 Another important issue is information about the political system. You will find it under the name of your ruler (1), next to their main title. As in the case of religion and culture, you can also choose the map mode that indicates the distribution of political systems in a given area (2). There are three main government types in the game - feudal, tribal and clan - and we will discuss them in detail later in this guide. The structure of your domain, along with its location on the map, determine the challenges you will have to face once you start the playthrough. 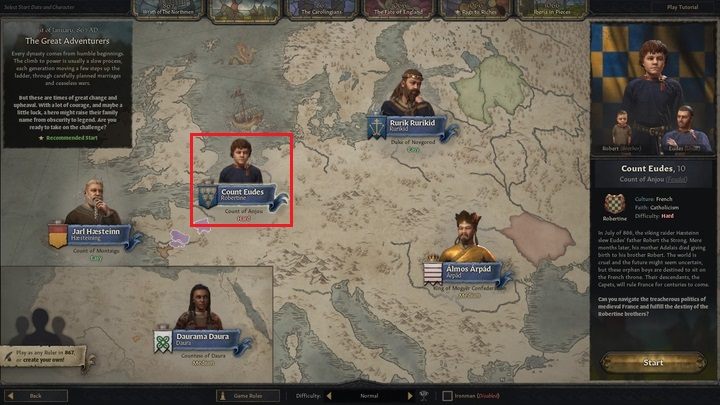 For example, if you choose to play as Count Eudes, you will start the game in central France and you will be the subject of the then king. Because your domain is feudal and your neighbors mostly adhere to the same religion, you will have to master various aspects of the game quite well in order to successfully expand. Additionally, your actions can be effectively limited by the king and other characters that you will depend on and who will initially be much stronger than you. The advantage of choosing a ruler who is someone's vassal is the protection that your senior can offer you in the event of an outside attack. Remember, however, that the king or duke to whom you are subject won't protect you from disputes with their other vassals, and they will also require you to pay a regular tribute and share some of your troops. 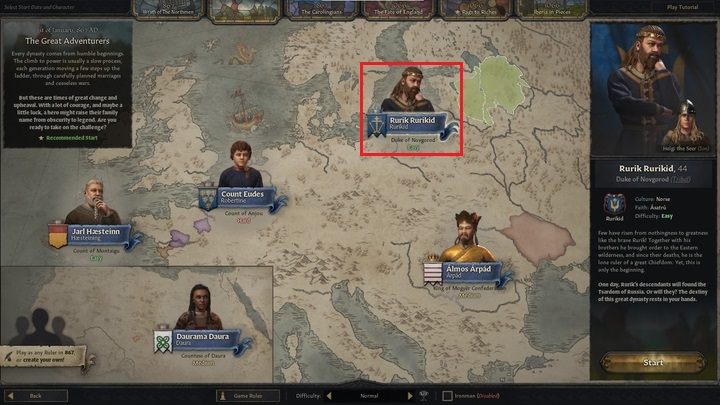 On the other hand, you can choose a fully independent ruler whose domain lies somewhere on the outskirts of the civilized world. One such person is, for example, the ruler of Novgorod, Rurik Rurikid. His domain is of the tribal government type that is in some respects more flexible than feudal rule. From the beginning, you will have a fairly strong army and you will be able to declare war on your neighbors without any major obstacles and without worrying about claims. This greatly facilitates expansion and you will be able to build a vast kingdom quite quickly. You are likely to encounter your first problems only after the death of your ruler, when his descendants may literally tear your legacy to shreds by dividing it among themselves. Nevertheless, choosing one of the tribal rulers of Eastern Europe seems like a good decision for new players. 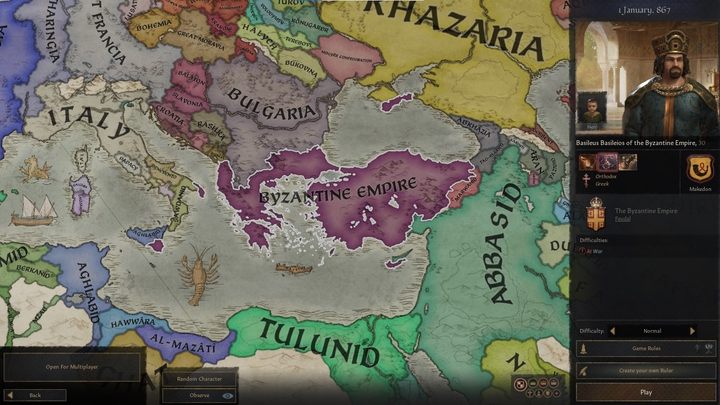 Playing as a major power can turn out to be quite a challenge for novice players.

I strongly advise beginners not to choose to play as the leader of one of the greatest empires on the map. The prospect of starting the game as the emperor of Byzantium may seem tempting, but in fact it will turn out to be quite a challenge. Managing such a large state is associated with a number of threats, both external and internal, which requires a good grasp of the in-game mechanics.