Information below is intended for persons with granted authorization only. If you're not an Agent with access status B, you shouldn't read it. The one who won't listen to this warning, will be entered on a list of people hunted by the Agency. All employees will have full right to use any means necessary to eliminate this person. Remember that our coordinators already know that you opened this document, so if you're not entitled, beware.

Greetings Agent. First we'd like to congratulate you on assigning this task. Eliminating organized crime from the streets of Pacific City is a true honor given only to the best. That's why now you're sitting in the Agency seat, weakened by the long stay in cryogenic chamber. Your body was put through a lot of improvements. Nanomechanisms as well as advanced genetics gave you the potential to be ahead of human limitations in many ways. You became an incredibly strong and agile tool of justice. Of course you need time to learn how to take advantage of your new skills, so don't expect too much at the beginning. With the course of carrying out subsequent missions, you'll be able to get at the height of your physical fitness though.

We have analyzed previous missions leading to eliminate gangs in Pacific City and created all information below based on them. Unfortunately, none of Agents managed to carry out this task, but their registration devices transmitted to us exact visual record of locations where every gang leader is staying. Thanks to that and also to our laboratory computer analysis, we prepared this document. Here you will find description of best ways to crack down on all bosses. Before you get to know the information about gangs, you need to learn of your skills and ways to improve them. You will also find out about weapon models suggested to use during the mission.

While preparing you to this mission, our labs concentrated on improving your agility, strength, explosives, driving and firearms skills.

Agility - it is certainly the most important skill of a good agent. It makes you move faster, jump higher and deal better with fall from heights. It can be improved in a few ways. First is to successfully complete Rooftop Races prepared by us. You don't have to participate in them though. Second is to climb on various buildings and rises and you should do it a lot. We equipped your vision chip in display with green orbs marked on it. By collecting them, you will improve your agility. Remember, that the higher given point is placed, the more experience you gain by achieving it, because you will need to put more effort to do it. The third way to improve your agility is to eliminate enemies at high altitudes - for example, when you're on the top of the highest building nearby and your enemies are on the street next to it.

Strength - it lets you not only lift heavy objects, throw them and strike more powerful, but also affects your stamina. In other words, the more strength you have, the more shots you can get before your body needs to be replaced. This skill you will improve by melee attacks or throwing various objects at your enemies.

Explosives - this skill you improve by using various explosive weaponry. The more skill you have, the more power will have explosions caused by you.

Firearms - you don't have to work hard on this skill, because it improves automatically with each shot enemy. The more enemies you shot, the more deadly accurate you will be with various pistols, shotguns and rifles. You will be also able to do more damage.

Driving - Pacific City is quite big and it's hard to move only by feet. This is why the driving skill is very useful. Vehicles let you not only to move faster, but they also give you cover on the gang territories. You will improve your driving skill by complete Road Races or just by run over your enemies. You can also try to execute car stunts in the spots marked on the display of your vision chip. Experience in driving will help you to change the course of flight after jumping into the air. Our analysis revealed that this particular ability isn't necessary to complete the mission of cleaning the streets of Pacific City.

There is also another thing that needs special attention - blue orbs. They are placed all over the city in amount of 300. Most probably you will find them in the hidden places such as behind the billboards, rocks or inside the buildings. Some of them can also be found on the roofs of the highest buildings, near spires, aerials and other constructions. Why do we inform you about them? The answer is simple: finding each one of them will get some experience towards every skill.

You have been trained to use any weapon without problem. You can choose any arms you want during the mission. Remember, that every weaponry which you deliver to the Agency supply points, will be stored there and its copies will be also in other magazines of our organization.

Our analysis clearly revealed that in most cases it's good to take machine gun, rocket and grenades on the mission. This will make you prepared for all circumstances. When it comes to guns, the best choice is Harlington HMG-90 - long-ranged, with good accuracy and capacious magazine. According to us, it should be your main ally. The other useful weapon is Watson HE99-X 'Firefly' - rocket with great striking power, precision and ability to fire five shells before reloading. It should be sufficient to give your enemies hell on earth. Each of described weapons you will find on the Shai-Gen territory, so it's good to pay them a visit and arm before you start eliminating the bosses. Then you just need to put the arms in one of the Agency supplies and use it whenever you want. 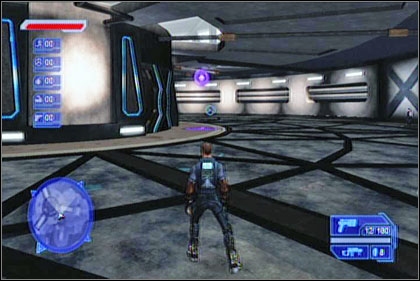 At this moment, you're inside our main quarter at the center of Pacific City - the terrain of your mission. By looking at the plans attached to this document you have surely noticed that all the city can be divided to three areas linked by bridges. Each of them is under control of one crime organization. The curious thing is that the gangsters are pleased with the status quo and don't manifest territorial inclinations. The war of gangs would surely suit us, but well... This way the task of eliminating all enemies is on your shoulders, Agent. When it comes to street clashes, the peacemakers will support you, but on the enemy territory you will be left to your own devices.

All gangs have the same authority structure. There's the main boss at the top of it, who is supported by four trusted generals and two additional commanders. By eliminating following henchmen, you will weaken not only the boss' bodyguard but also the whole organization.

Remember, that we granted you superhuman agility not without a reason. City contains not only crowded streets full of cars but also a lot of roofs which will help you to get faster to any destination. Your opponents will be surprised when you'll attack them from on high.

The Agency supply points are worth mentioning as well. They are storehouses placed all over the city and they have been taken by the enemy. Once you recapture them, you'll gain a perfect place to store the weapons. You will be also able to use them as teleports to move to the different locations much more faster. The supply points taken by your enemies are marked on your radar by changing color symbols. Once they're yours, they will turn red. When you'll approach them, you'll see they are marked by an orange shaft of light.