On this page of our game guide to Control - The Foundation you can find a detailed description of The Foundation mission. Our walkthrough explains how to reach the Foundation caves, how to run through the first areas of the caves, and how to unlock the first new power of Jesse. 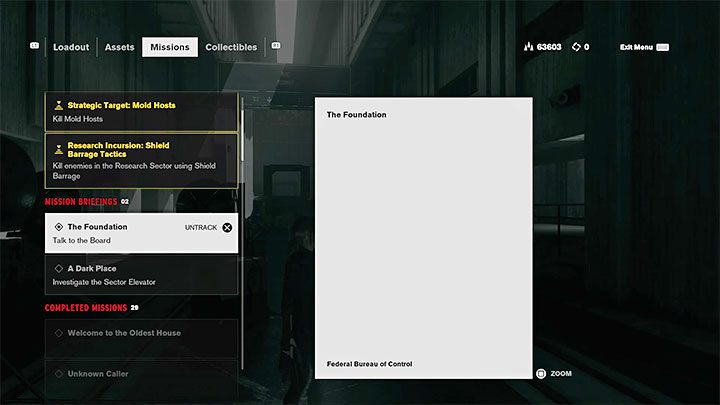 If you have gained access to The Foundation expansion set, then The Foundation mission described below should appear in Jesse's journal just after the game gets launched.

If this task is unavailable in your journal, then it means that maybe you haven't made enough progress in the game yet. Take care of the main quests of the primary campaign. Don't play the DLC if you haven't unlocked the Levitate ability yet, which can be acquired during My brother's keeper main mission. The stronger Jesse gets, the more easily she can defeat the powerful opponents of the DLC.

Talk to the Board 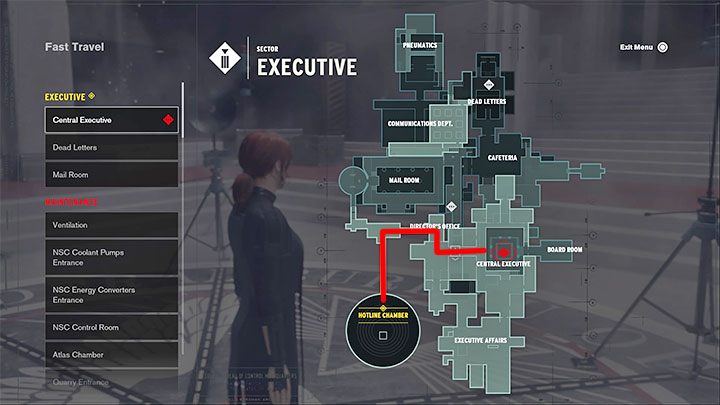 The conversation with the Board takes place in the Hotline Chamber which is located in the Executive Sector. The easiest way to get there is by following the route shown in the picture above - start at the Central Executive and enter the corridor on the upper floor that leads west. Then go through the Director's Office and turn south. 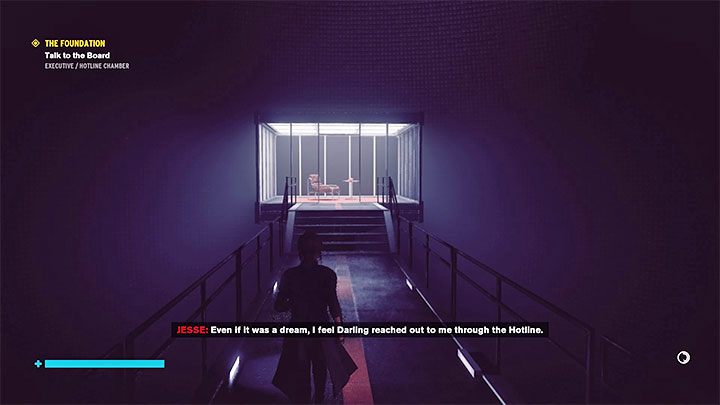 The destination of your journey is the location shown in the picture. There is a phone there. Interact with the phone and listen to the Board's message. 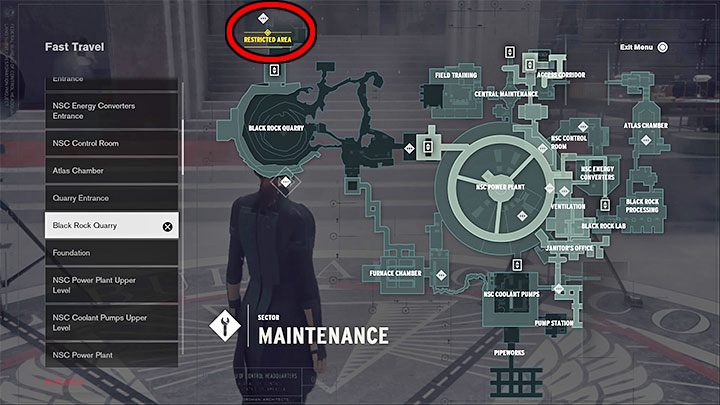 Your next task is to find the "magic door" that will allow Jesse to move into the The Foundation sector.

Your destination is located in the Maintenance Sector - this is a Restricted Area shown in the picture above. If you have an unlocked fast travel point there - Foundation, then just select it from the list. 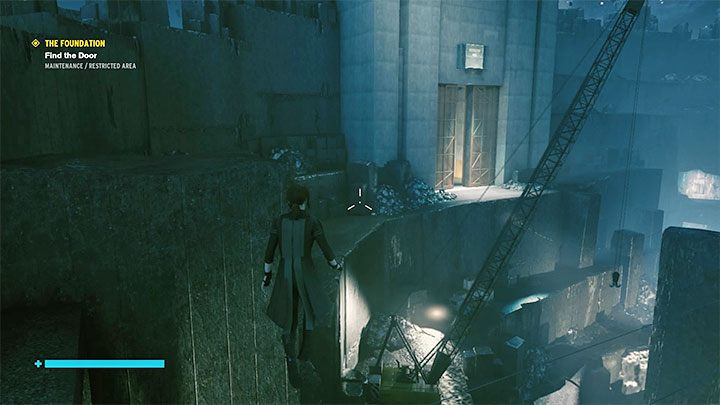 If you don't have an unlocked fast travel point, start at the Black Rock Quarry located south of the Forbidden Zone. Use the Levitate ability to reach the northern part of the quarry. This place has a large elevator shaft - jump into it and help yourself with levitation so you won't get killed by fall damage. 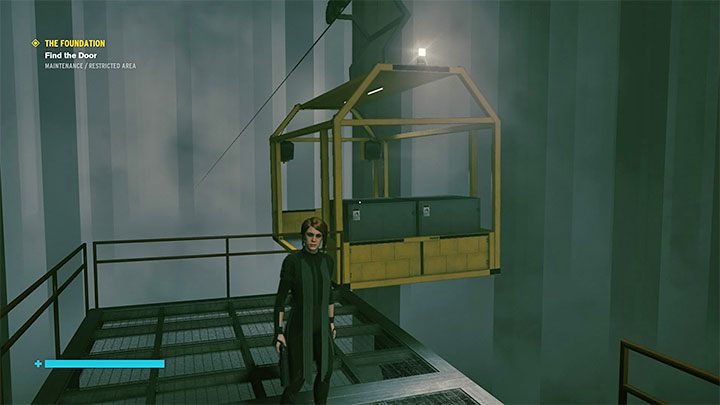 When you land on the lower level, find the Cable Cart Control room and use the switch to summon the moving platform (this can take several seconds). Enter the platform and get it moving. You'll head north, beyond the Technological sector map. 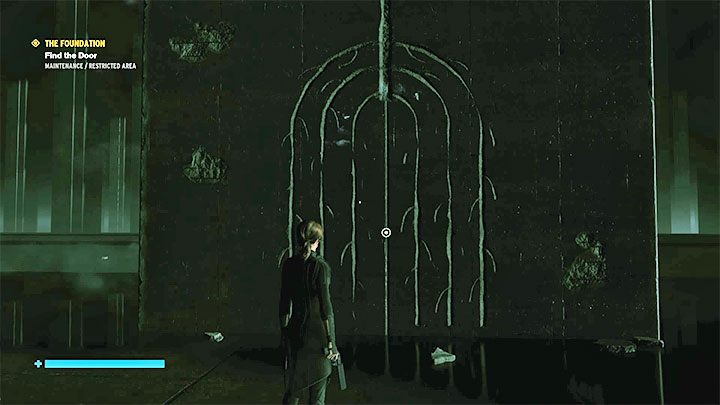 After leaving the platform, head north until you reach a small encampment with a checkpoint. The door you are looking for have been shown in the attached picture - interact with the door. Jesse will be transferred to the Foundation sector.

Additional note: Moving to the Foundation Sector is not a point of no return. In the new location, you will find checkpoints that allow you to freely return to other areas of the Oldest House. 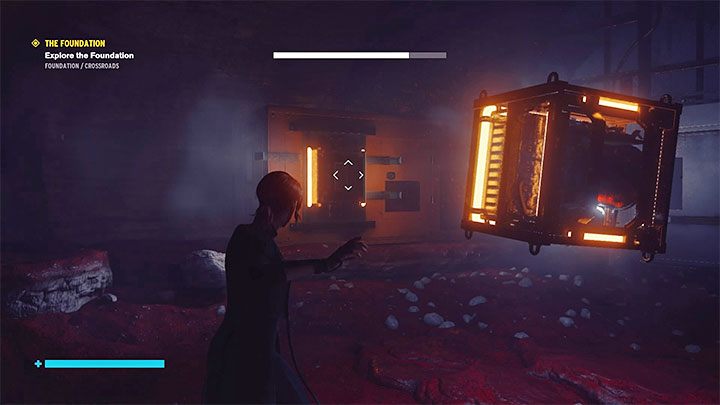 The path that leads through the Foundation sector will be very linear for some time. You'll come across a lot of blocked passages and inaccessible loot chests. It is best to temporarily ignore them and engage in careful exploration of the sector later, that is, only after unlocking both new skills available in this DLC (this will take place during the next story mission - The Nail).

Soon, as you begin to explore the dark caves, you will find a power core. Grab it with the help of telekinesis and place it in the generator slot (picture above) to restore the electricity in the area. 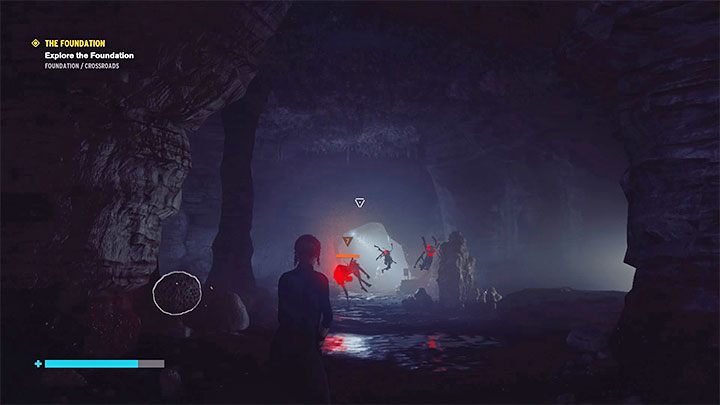 Along the way, you'll discover the Research Site Gamma and watch the first vision/video recording of Marshall. Avoid the "white abyss" along the way by flying over them or passing by them. However, falling into such abyss doesn't cause immediate death and you will respawn next to it.

You'll encounter some flying monsters in the caves. Dealing with them is not difficult. In addition, you can grab sphere-shaped objects found in caves - they explode on direct contact and can inflict more damage than standard throwable objects. 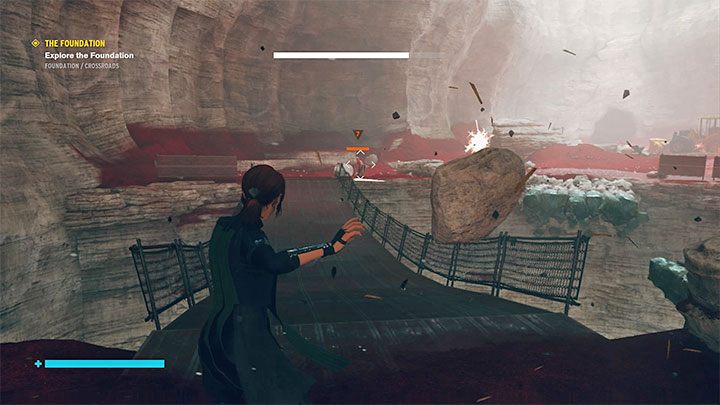 Another location you have to go through is the Cave System. Start by getting rid of more enemies and unlocking the checkpoint.

Continue your journey. In a location with two bridges you will be attacked by a new type of enemy, that is, Hiss Sharpened. These enemies are able to move very quickly from point A to point B. You have to perform a quick jump or activate a melee attack if necessary. You may also opt to use melee service weapons more often as you engage in close-range combat. 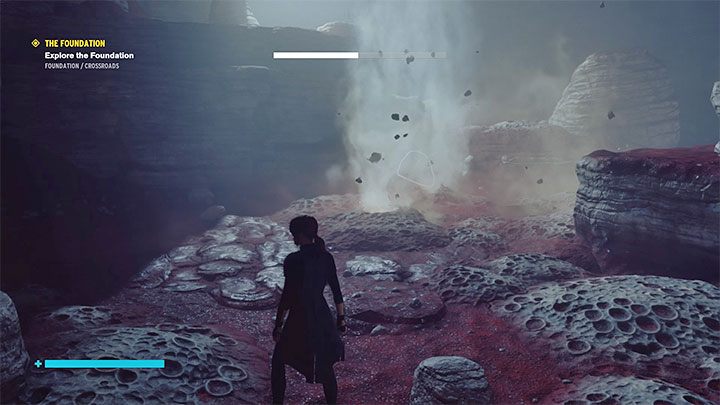 Move on. You'll come across the location with the exploding geysers shown in the picture. Try to avoid them, because Jesse can lose a lot of health points in a few seconds. Move around them or fly past them. You can also wait for the geyser to calm down for a few seconds. 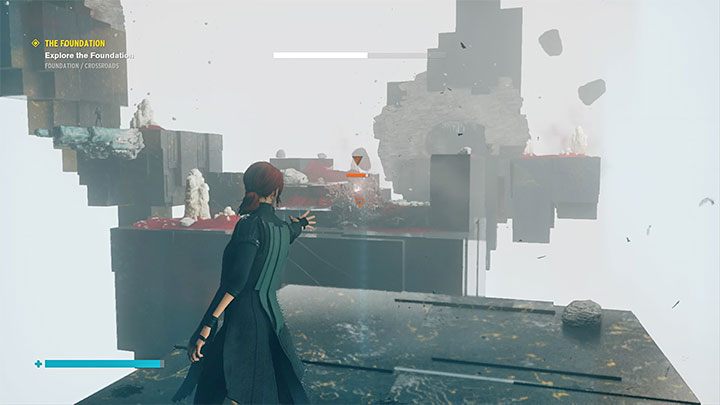 Continue crossing the caves. A linear main path will lead you to the location of Cave Bleed, which is partially in the astral plane. You have to start a new battle here. Watch out for a strong opponent which has a shield made of levitating objects. Use the tactic of throwing an object at him with the help of telekinesis and then (after he temporarily loses his shield) attack him with a service weapon. If you do the right thing and attack him in the right time, then he won't be able to counter-attack. 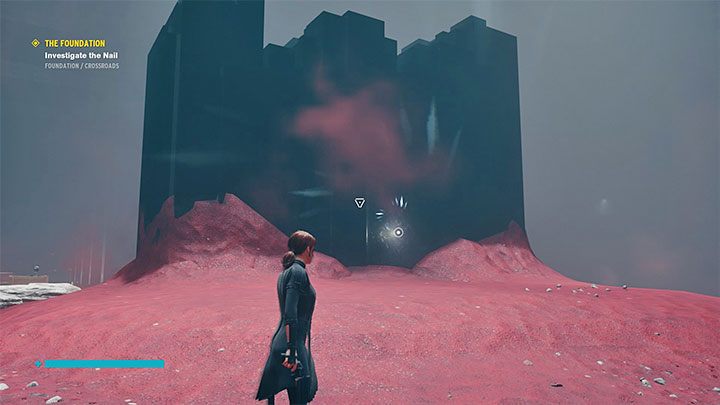 After the battle, use levitation to get to the opposite end of the Cave Bleed. There, you will find the cave entrance. You will return to the caves of the Foundation. The main path will lead you to the Crossroads location, which is a hub of the Foundation sector. There's a new checkpoint here.

As part of this mission, you have to take an interest in The Nail, which is a huge monolith located in the central part of the Crossroads. Find a spot where you can interact with it. 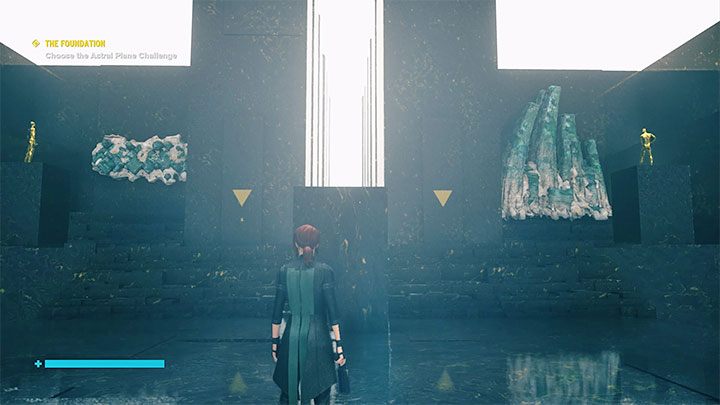 By watching the new cut-scene, which involves the Board, you can find out that Jesse can choose one of the two new powers / abilities. The location where you can make a decision is shown in the attached screenshot - you have to touch the left or right wall depending on the power you want to choose.

Important information is the fact that you will not miss out the opportunity to acquire one of the two proposed abilities. You will be able to use the selected power right away. The second of the available powers will be acquired in the later part of the next story mission - The Nail. You'll just have to wait a while to get access to it. 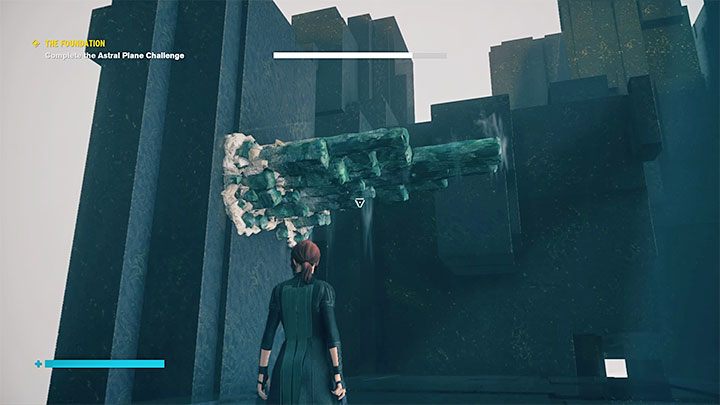 By touching the left wall you will select the Shape power. The main application of this special skill is the ability to pull interactive blocks from the walls. They become ledges to which Jesse can jump or climb and thus reach previously inaccessible places.

The game highlights places where blocks can be pulled out and this can be done by holding the telekinesis button - you can do this by standing on a hard ground or by using the levitation option (this option is mandatory if you want to pull out a few adjacent ledges located over the chasm). Each block will re-hide after a certain amount of time, so you have to hurry up in order to get there and bounce back from a particular ledge. 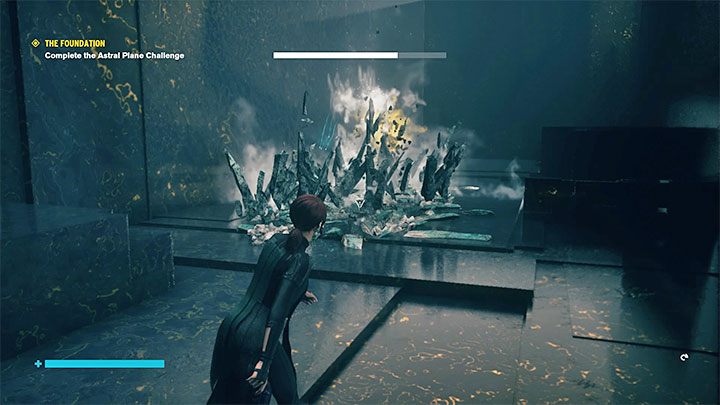 Shape also has a second application - you can activate various traps with sharp crystals. The vast majority of them can be usually found on the ground. The game highlights them up in the same way as the ledges that can be pulled out or extended from the wall, and you have to use telekinesis on them.

Always wait until at least 1 opponent is standing on the trap. The trap will be able to seriously injure the enemy or even kill him immediately. 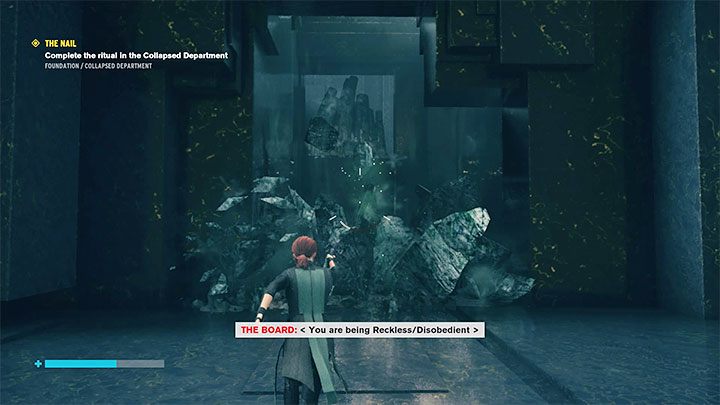 By touching the right wall you will select the Fracture ability. It is an upgrade of the service weapon, which works with all weapon varieties.

From this point on, you can use service weapon on all types of black crystals. In most situations, the effect of shooting the crystals will unlock a new passageway. However, you need to be aware that crystals get rebuilt after a short time, so you need to move quickly through the passageway there were previously blocking. 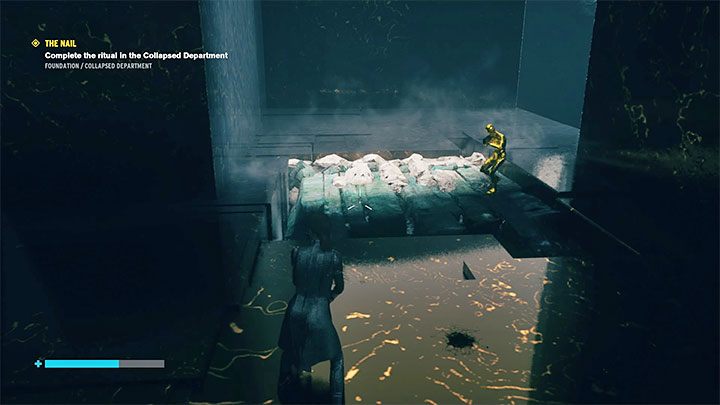 Other uses of Fracture are the following: 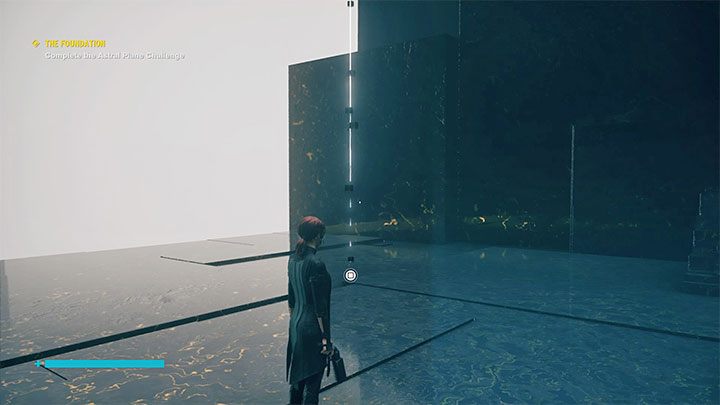 Regardless of the chosen skill, you must reach the switch after completing the trial. Activating the switch will end your visit in the astral plane.

After returning to the Crossroads location, the mission will be completed. Rewards: 2 development points, collectible (recording), weapon mod and crafting materials. The next story mission will begin - The Nail.