The crossing on the west was defended by another 88mm gun, two machineguns (one taken from the nearby ammo depot, after destroying the wooden bridge), a mortar section, Luftlande and some minor infantry (both equipped with panzerschrecks) and a Puma hidden behind the building, standing sideways to the Allies. While organizing my defence, I have reached the unit limit available in this scenario. 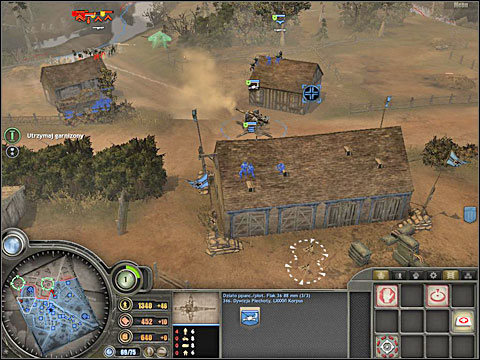 The enemy has seized almost all of the other shore, taking over the local garrisons. From time to time he tried to reach my side - of course such attempts were quickly dealt with. At some moment... silence occurred. It will probably last until you won't attack yourself, trying to take over and hold the whole terrain. How to do it? Well, you have large forces near the bridges, they will do just fine. Leave some small defence (the 88mm cannons that you can't move and one machinegun) to defend the crossings/bridge and the south-east ammo depot (leave the machinegun inside the bunker), sending everyone else across the river. Strike from both sides and in the centre of the map. You shouldn't have any problems on the sides and you will quickly regain control over the garrisons. You can run into some resistance in the centre, however the Luftlande team, sapper and machinegun sections and additionally a Puma and a Stug taken from the sides should handle it. Use the sappers and Luftlande to repair you vehicles (during the fight!), quickly place a MG-42 post. After killing every Allied soldier or after they run for it, take over the garrison and head for the other one. 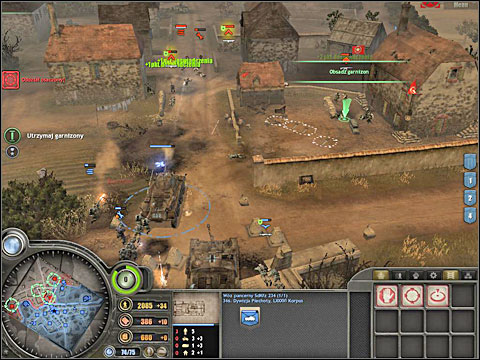 In the meantime you will be given and additional task: build fortifications in the places showed by the orange arrows (both crossing and the main bridge). I have to admit that... I have no idea how to do that. I have built 88mm cannons posts, placed mines and sandbags, built anti-tank barriers - I just couldn't complete this task. Eventually I gave up. Maybe you will have more luck and come with an idea how to complete this task? I think this is just a bug in this version of the game... Oh, in case the enemy air-force manages to bomb the main bridge (making it harder for your units to get to the other side), the Pioneers (German sappers) can fix it quite fast. 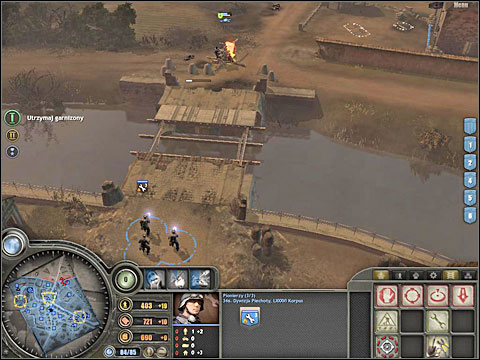 While taking over the garrisons on the north shore, I would recommend the Luftlande equipped with panzerschrecks, they can not only build the 88mm cannons (a great weapon against the enemy tanks that are your main enemy in this mission) but also take over garrisons, repair guns and vehicles and finally fight with tanks and infantry. If you also want to use them, it's worth exchanging the experience points you have gained on raising their motivation. The captured garrisons can be mines quickly (an adequate ability from the support tree), making it harder for the Allies to take them over. Oh, it's good not to place your infantry directly inside the garrisons. If it will be destroyed by the enemy tanks, you will probably lose the whole garrison, even if it was in your hands till the end. You can fill up the gaps in your infantry nearby the recovered garrisons. 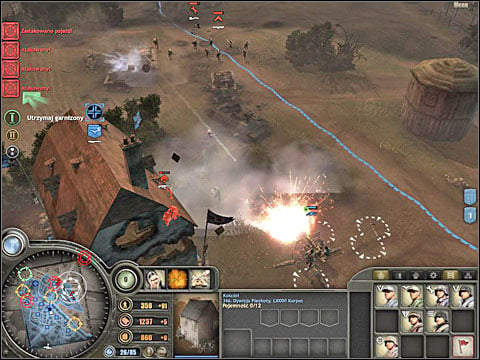 At some moment, the German command will aid you with some tanks (including a great Panther), assault troops, sappers and an armoured transporter - they reinforcement will enter the map from south. Although it has to be said - these German forces aren't much, compared to the Allied units that giving you a hard time on the north. Because of that, you should use them very carefully and additionally reach the population limit by recruiting the maximum number of units, before the reinforcements appear. You're fighting mainly with tanks (I think that apart from weak Shermans I had also seen much better Pershings as well as Hellcats and M10, both quite dangerous), so it would be wise to arrange yourself some Henschel plane support, by spending your experience points on them. The plane does a few air-strikes, damaging the enemy vehicles in the given region - don't waste this on single tanks! 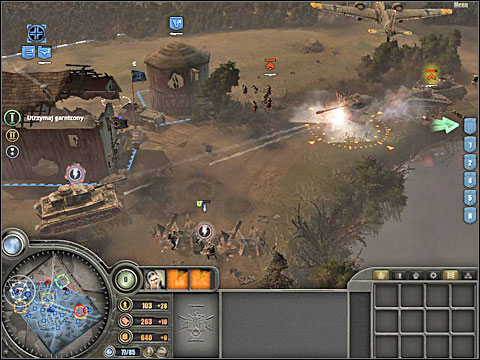