Welcome to the guide to the third instalment in the Company of Heroes series. I have marked the mission that you have to complete while playing the scenario with adequate colours: green (main mission), orange (side missions) and blue (medal ones). Of course during the game you're only obligated to completing the main ones in order to complete the scenario, but in this guide you will find many hints that will (I hope so) help you in getting every medal and deserving the command's gratitude. There are also lots of pictures here, this time in a reasonable resolution. By the way - I would like to point out that they're not here to make the guide more colourful (that's their second role in fact) but they have some important info in them. Every screen was made in order to show as much possible of the actual action, units, important in-game moments and actions. I wouldn't be able to make most of them if not for my virtual bravery. I was playing on the high difficulty setting (one level below the highest), the polish version, patch 2.501. Have fun with the game!

About Company of Heroes: Tales of Valor Game Guide & Walkthrough 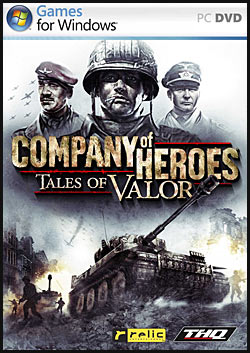 - 3 Immersive Storylines - Embark on the definitive WWII experience from all sides of the war. Each episode contains new missions and objectives in a persistent environment.
- Episode 1: Tiger Ace: Control Tiger Tank Ace Hauptmann Voss's highly decorated Tigergruppen against the British 7th Armored Division on D-Day in one of the most famous tank battles of WWII.
- Episode 2: Causeway: Command and American Paratrooper Company in the hours following the initial D-Day landings.
- Episode 3: Falaise Picket: Command the Wehrmacht Army as your soldiers try and hold off the advancing Allied army.
- Direct Fire Control - Not only can the player's tactical and strategic decisions influence the battle, but players also directly control units on the battlefield. Players will aim, fire, and maneuver in real-time to capitalize on the changing battle conditions.
- Command New Units - New infantry and vehicles such as the Schwimmwagen and Staghound will be available. The Schwimmwagen is an amphibious, all-wheel drive off-road vehicle while the Staghound is a highly maneuverable 4x4 Armored Car.
- Conquer New Territory - New maps based on famous battles such as Villers-Bocage will be available for competitive players in the online battlefield.

Company of Heroes: Tales of Valor Game Guide & Walkthrough is also available in our Mobile App