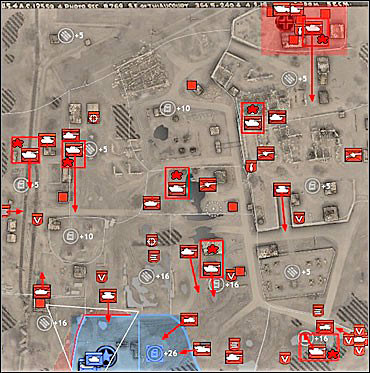 Note: in this mission you'll be fighting with many german vehicles, especially Panther tanks mentioned in mission objectives, but also PzKpfw IVs and Stug IV assault guns (you won't see heavy Tigers in this mission yet). So you should also put on tanks.

You start the game with base in which you've got tank depot and HQ producing engineers. Click on depot and invent 76mm gun for your tanks. Focus on systematical Sherman tanks production, don't invest in M10 tank destroyers - your Sherman tank with 76mm gun can do the same job. M10s have weak armor, they don't have MGs to deal with enemy infantry (and you'll see some in this mission) and no additional functions/gadgets (for example they can't use smokescreens). Ok, they're cheaper, so what... Create one section of engineers to extend your base, build weapons support depot first (snipers are best for recon purposes in this mission), and barracks later. Your HMGs will be securing the territory captured by tanks. You can place some fortifications in your base also - sandbags, MG emplacements (covering the base from east and north). It's good idea to leave here a tank too - to protect the base. [1] Recruit more sappers and send them follow the tanks driving to the battle - they have to repair vehicles, seize the points and build OPs on them. In the beginning it's best to have one team of engineers behind every tank. Oh, arm your Sherman tanks with MGs on turrets, they're good against the infantry. Capture neighbouring sectors, repel possible german counterattacks on your base - you should know what to do, it's eleventh mission already. Let's focus only on PzKpfw V Panther tanks [*] you must destroy - it's the one and only primary objective in this mission (there is no secondary goal). If you'll play carefully without losing too many of your tanks (I lost only one in my game) you'll be awarded with suitable medal for that act.

There are seven Panther tanks you have to destroy. First of them prepared an ambush on you in the woods east of your base, near the good fuel point: I must to mention now that I have no idea if Panther's locations describing by me are the same each time you play this mission - I played this only one. [2] This german PzKpfw V tank managed to escape from me (but I did it first ;-), driving from the woods when I got closer, and later I didn't find it here, I hunted it down somewhere else (I'll write where).

Second Panther tank hid himself in the building further to the north - he will drive from his ambush when you'll get closer. [3]

If you manage to catch him in the trap as you see on picture (enemy vehicle exposes his rear to my Sherman and side to M10 tank destroyer) he's dead as a doornail - minus one Panther. [4]

But not only Panthers like to hide in buildings - one Stug IV also hit on this idea. [5]

You should spend your earned command points on the possibility of repairing the vehicles with their crews [6] : next to the minimap you'll see an icon - click on it if you have enough resources (200 of manpower I think) and crews of all your tanks will start repairing their vehicles for some time so you don't have to count on your engineers only.

I hunted down another PzKpfw V Panther tank near the track-way north from my base when he was driving to my base. I wrecked him from the side with my M10 Wolverine tank destroyer hiding behind the building/wall (and repairing by the engineers). Oh, pay attention that Panthers like to move with a company of one or couple PzKpfw IV tanks. [7]

Next Panther was killed by me closer to the centre of a map. [8] Remember that enemy tanks usually don't stay in place but drive around, sometimes patrol the cyclical route.

One of Panthers appeared on the railway track, close to the left (west) edge of a map. He had no chances encircled by two my tanks (engineers were repairing the vehicle Jerry aimed at). [9]

If the fact of facing so many german tanks besides the Panthers makes you nervous you can do something with that. For example you can send some of your tanks from your base on the south to the north (along the railway tracks), drive to the munitions sector at the northern edge of a map and turn right, on east (this route seems to me safest) and then... drive into the german base and perform some demolition there. Try to destroy what you can, especially tank factories - even one your tank is able to make gigantic devastation, especially if you take care of repairing him with engineers. You should also see another Panther tank in this enemy base. [10] Of course you can see more german vehicles there (until you destroy the factories production still goes at full speed) but you can easily evade them (AI sucks!) hiding behind the buildings and razing last ones to the ground. Oh, and kill as many german Pioneers as you can if they'll come to fix damages - in that way later there will be nobody to repair german tanks escaping from the frontline to the rear.

I hunted down other two Panther tanks in the ruins south of german base. One of them stood closer to the munitions point. [11]

Second one was destroyed closer to the fuel point (I think this was the Panther tank which escaped me from the woods in the beginning of a mission). [12]

Remember about the possibility of using smokescreens by your Sherman tanks (suitable icon in the orders menu) - before smoke falls down you can change your position and surprise enemy tank from another spot. [13]

A patent of playing hide-and-seek with stupid Jerry also works quite good - it's a good trick against the enemy patrolling cyclical route: hide behind the building, wait until Jerry turn back, then drive out and hit him in the rear armor. When he is turning his turret in your direction quickly drive back behind the house. A moment later repeat the procedure. [14]

You can play the same way when driving follow the enemy: get closer, shoot at his rear, reverse when he's turning the turret, a moment later start pursuing him again - it works best when pursuing slowly moving enemy vehicle (with damaged engine). [15]