This section of the guide to Call of Cthulhu contains a walkthrough of the game's fourth chapter, "Tunnels under the Hawkins mansion." After finding a hidden entrance to the underground, the main character, accompanied by Officer Bradley, follows in the footsteps of a mysterious thief. 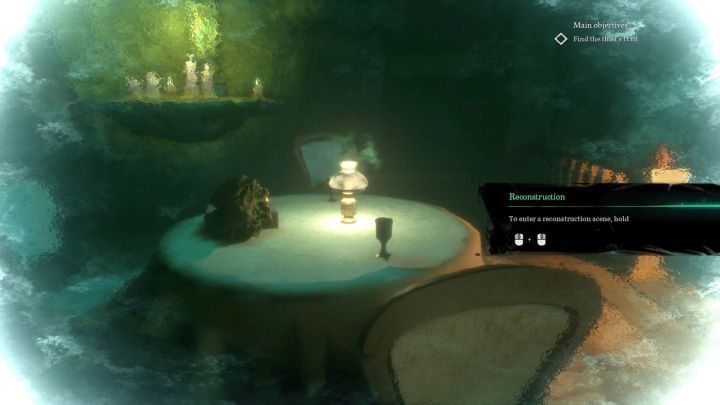 Another reconstruction to be carried out.

Once you regain control of the character, follow Officer Bradley. Soon you will reach the new room. You will carry out a reconstruction. 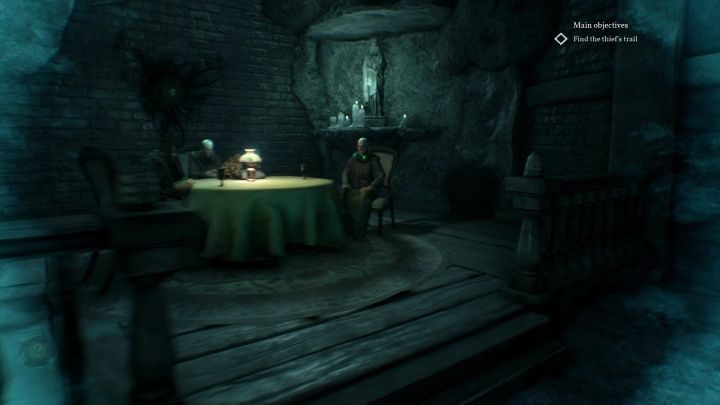 At the end of the reconstruction, you must examine the man sitting at the table.

Start by examining the table and then checking the chest standing under the wall. Return to the table and explore the mysterious mask, and then walk towards the passage, from which a couple of heroes just arrived. Examine the entrance and go back to the table again, where the last point that you should investigate - i.e. one of the characters sitting at the table. 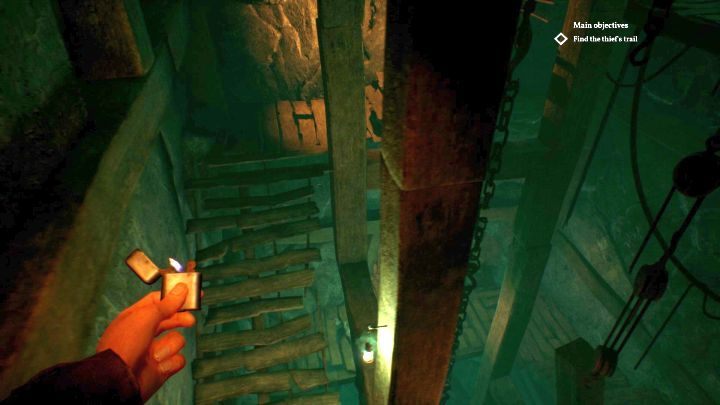 Exit the reconstruction. Approach Officer Bradley and run downstairs. Ignore the entrance - it's locked. Rather, go to the very bottom, jump into the water and continue. Squeeze through a narrow passage to reach the cave.

Go to the main cave 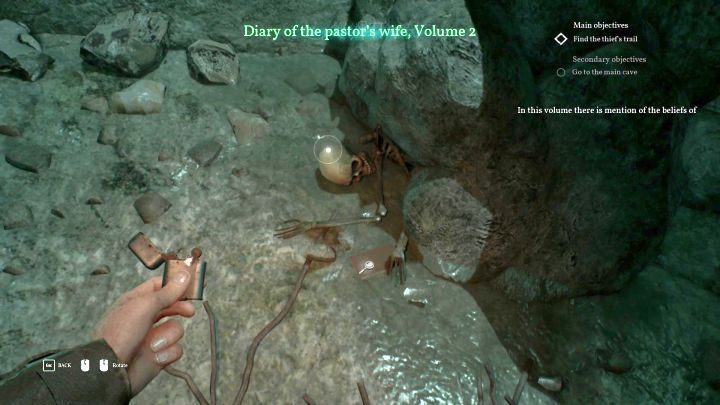 One of the several items that can be found here.

When you find yourself in the main cave, go up a bit and explore the dream catcher hanging from above. Go forwards while holding on to the right and collect the item lying on the ground - Diary of the pastor's wife, Volume 2 - as well as examine the nearby skeleton. 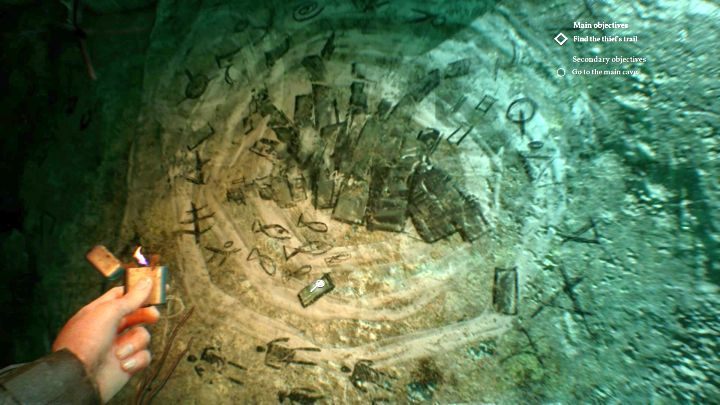 One of the frescoes that you can examine here.

Before you move on, also examine the fresco directly above the skeleton - it's related to completing one of the achievements, The Shadow out of Time. Walk along the right wall and explore 3 more frescoes. Continue your march and jump to the new part of the cave. 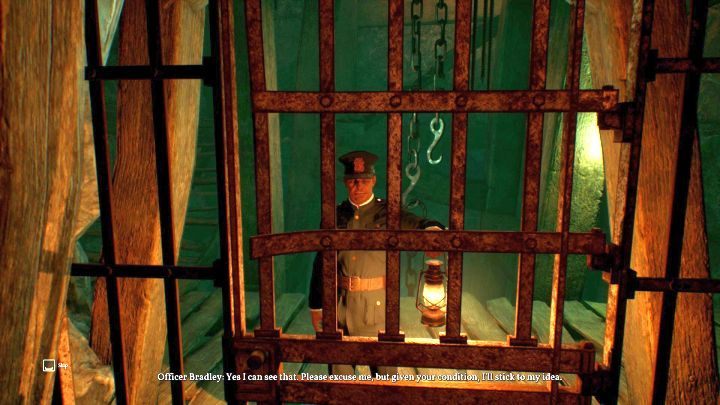 Bradley will not be able to join you, but you will meet soon.

A short exchange of views will begin with Officer Bradley, who, however, will not be able to join you and will look for another way. Turn around and walk along the only road available, until you reach the stairs. 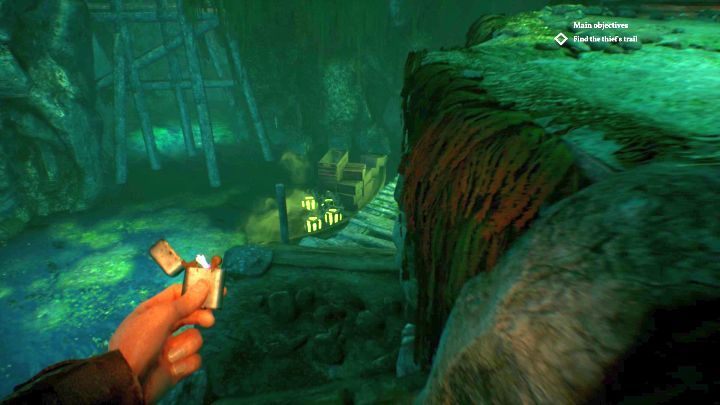 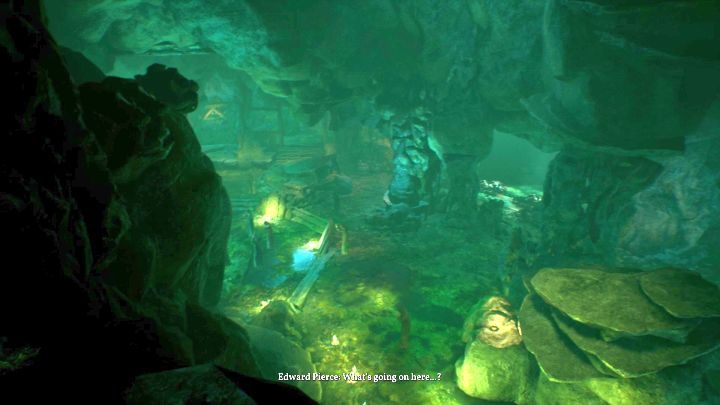 You have to watch out for the cultists now.

Continue straight ahead and walk through the door to activate the cut-scene. Once you regain control of your character, walk along the only path available until you reach the room with the altar. 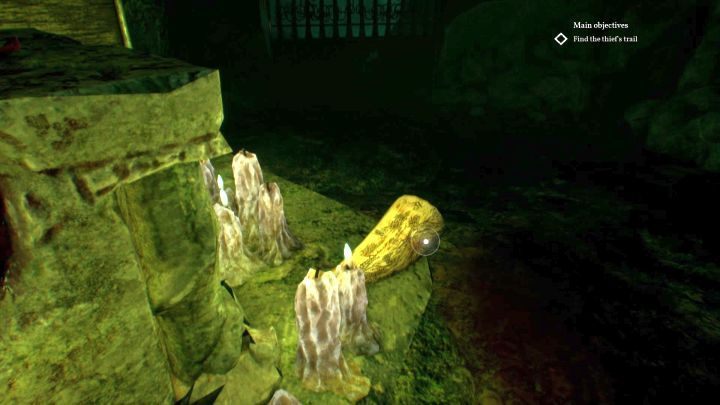 One of the three local objects that increase the level of Occultism.

First, examine the altar on the left and then go to the altar on the right - next to it, you will find an object that increases the Occultism, a Carved Bone. Collect it and explore the altar in the middle, with a photograph of the protagonist - this activates a short intermittent scene. 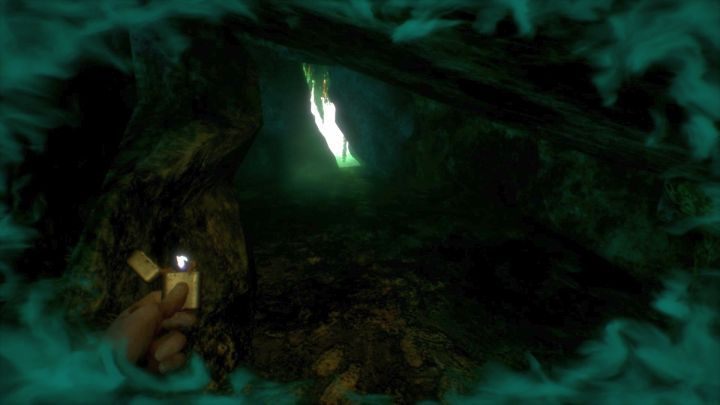 A panic attack is an interesting but difficult mechanic.

You find yourself in a room full of intestines and dead fish and here, for the first time, the panic attack mechanics is activated. During the panic attack, the image will gradually darken and move, and the sound will be distorted, making navigation much more difficult - as you can guess, avoiding enemies in this state is not the simplest thing to do. The hero will calm down when you go back to a "normal" place - away from enemies, bodies and... tiny rooms. Yes, the hero doesn't like small rooms - hiding in wardrobes allows you to avoid enemies, but causes panic attacks quickly. 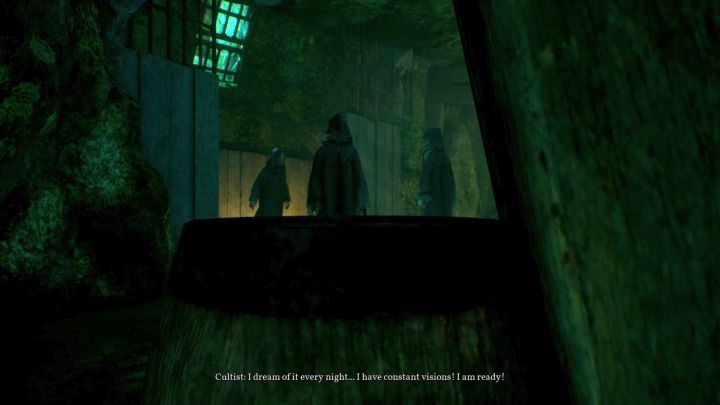 Another group of cultists.

Get upstairs and bounce to the right of the closed door. Squeeze through a narrow passage and watch the cut-scene. From this point on, you have to be careful - you have to move quietly here, best crouched to avoid being discovered by cultists. If this happens, they will catch you and you will need to load a checkpoint. 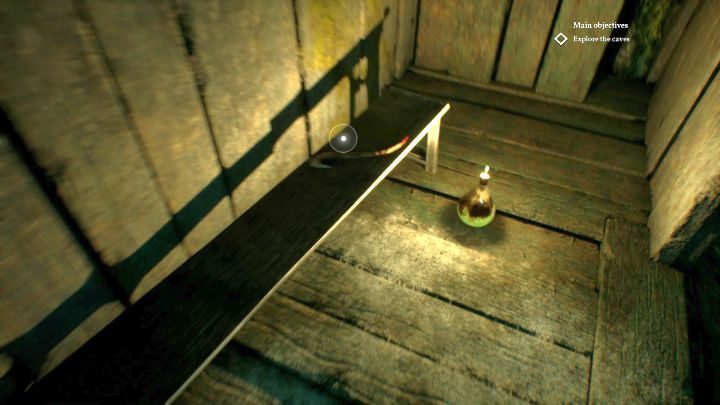 Enter the cultists' room and turn left, where you will find an object that increases Occultism, the Ritual Dagger. 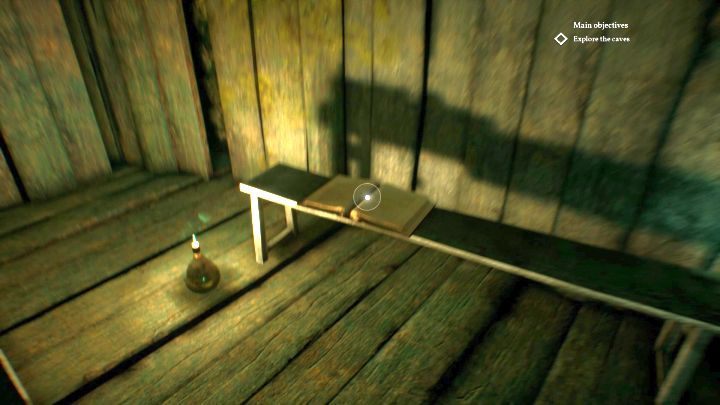 Rotate 180 degrees now and enter the niche on the right - there will be Annotated Bible, another item that raises the level of Occultism. 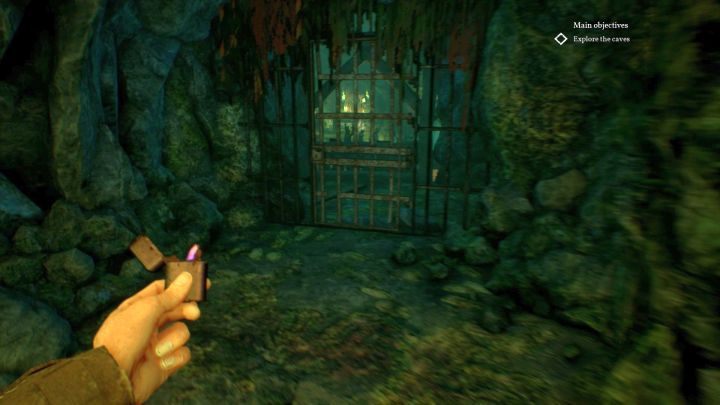 Continue the journey. You'll find the door, which is of course closed - turn left from the door and squeeze through the passage. From now on, the level looks very similar to the beginning of the game. Don't waste your time searching the darkness, because there's nothing here and head to the next door to activate the cut-scene. 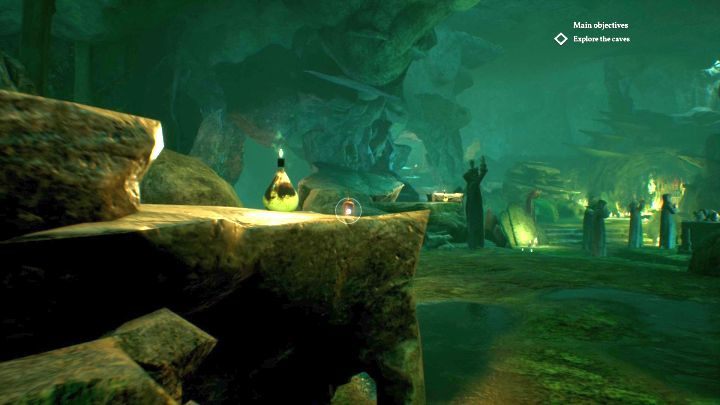 Here you can refill the oil in the lamp.

You must be careful not to be noticed by cultists, so it's a good idea to move around while crouching and not to use any light. Ignore the right side of the cave - there is nothing but a refill tank. 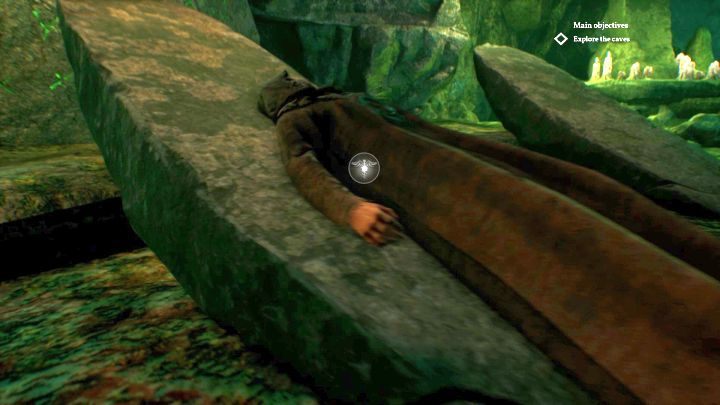 One of the cultists lying on the stones can be explored.

Go left until you reach the cultists lying in a row. You can interact with the second cultivator from the left. Investigate the cultivator and the painting behind him. Now head towards the new cultivator and open the door at the end of the passage to activate a scene you've seen in the first chapter, but slightly changed. 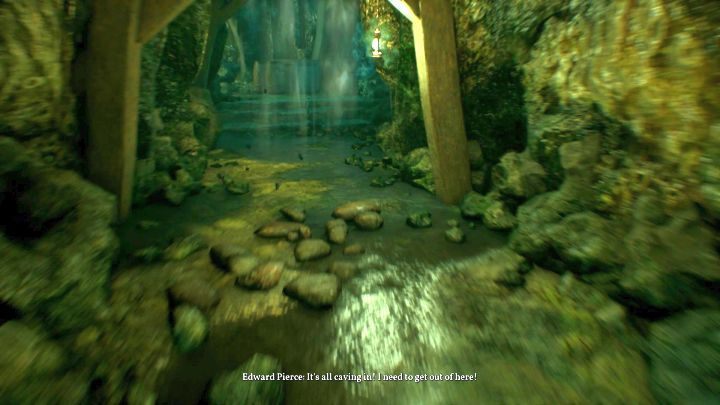 Don't look to the sides while resorting - there's nothing worthy of attention here.

When the scene comes to an end, you will need to act quickly. You have to run away, run away through a collapsing tunnel - don't stop for a moment, as this will result in the immediate death of the hero. Run through the cave and after a short while you will reach the end of the cave and activate a new scene. 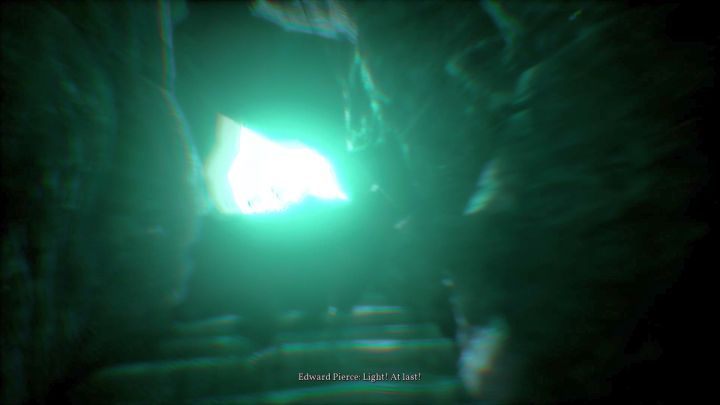 When you regain control of your character, navigate the only path available, up the cave. There is nothing to gather or explore here, so just keep walking. After a while you will reach the end of the cave, another cut-scene activates and the chapter will end.