This page of the guide to Biomutant explains the nature of statues, i.e. effects that are applied to the protagonist or enemies. Additionally, you will learn how important resistance to elements is, and how to increase individual resistances in order to minimize the protagonist's exposure to negative elemental effects. 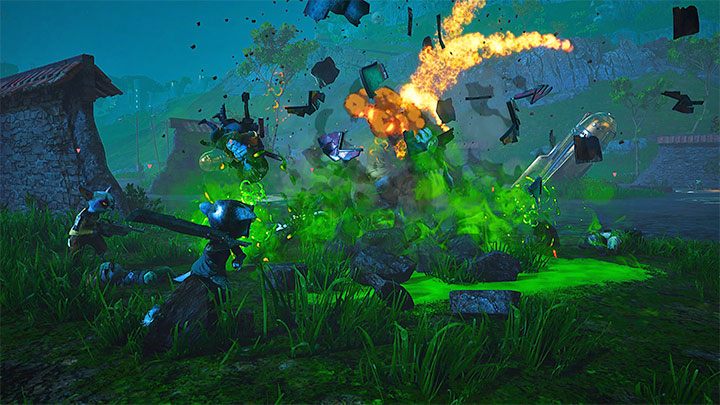 There are 4 basic elements in Biomutant:

Dealing and receiving damage done by these elements can be the result of using appropriate weapons and armor, being in the element's zones (e.g. a contaminated area near an abandoned power plant) and falling prey to attacks from enemies with elemental powers. 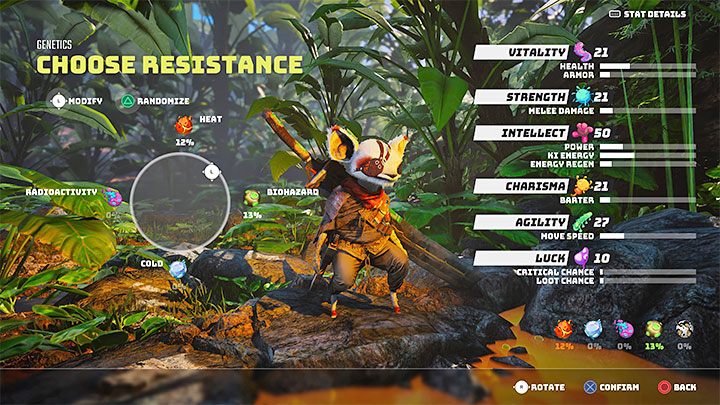 If you want to protect yourself from the effects of various elements you should first of all try to increase your Resistance to them. You can do this initially when you create a new character. The game allows you to move the slider and set the initial Resistance values for each element. The choice is yours here, e.g. you can choose to protect yourself evenly against all elements or focus on 1-2 elements and ignore the rest. 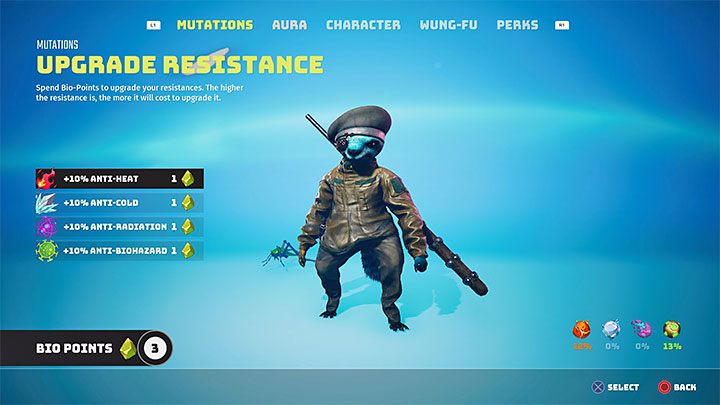 You can also spend Bio Points in the Mutation tab to increase your Resistance. Each operation of this type increases the selected resistance by 10%. The cost of upgrading your Resilience unfortunately increases with subsequent purchases. Try to boost each of the 4 elements at least once anyway, as it will only cost you a total of only 4 Bio Points. 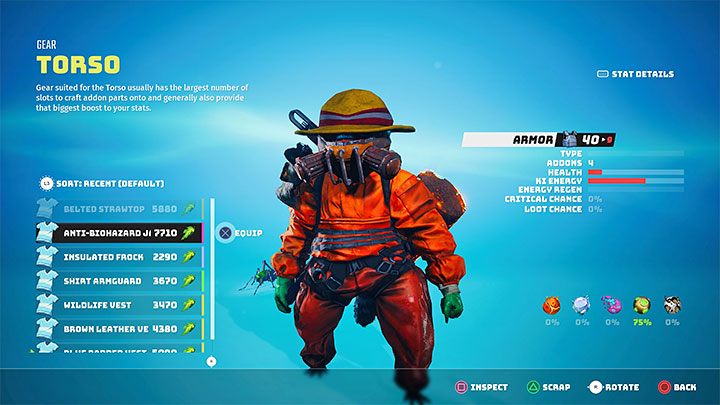 Increasing Resistance to the elements can also be affected by the equipment you use. The armor and other clothing items you acquire can boost selected elements. Therefore, it's a good idea to collect suits, because they allow you to gain the biggest percentage increase in immunity and wearing the whole set may eventually make you 100% immune to the given element. We've covered this topic in more detail in the section called Suits - how to get them?. 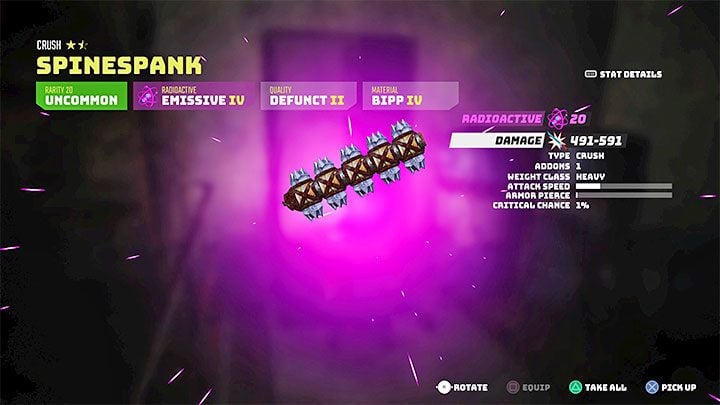 If you want to use elemental effects to attack your enemies, you should first of all equip your character with appropriate weapons and other offensive items. Weapons that deal elemental damage can be either found in the game world as loot, or crafted (as completely new items or as upgrades to existing weapons). It is a good idea to aim for at least one of your character's weapons to be able to deal some elemental damage on top of standard damage. 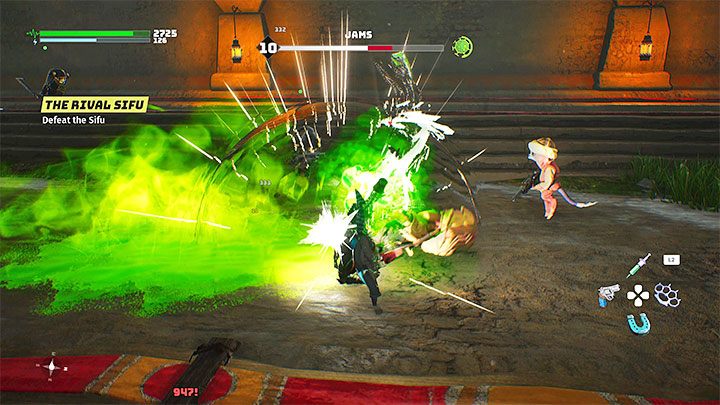 Some of the special powers that can be unlocked with Bio or Psi points may also be linked to the elements. Remember that you can have 4 special powers ready at a time. Try to make sure that you are always able to activate the powers that are linked to at least two different elements (e.g. Biohazard and Heat). This will allow you to keep them useful even if you come across an enemy with very high resistance to a particular element. 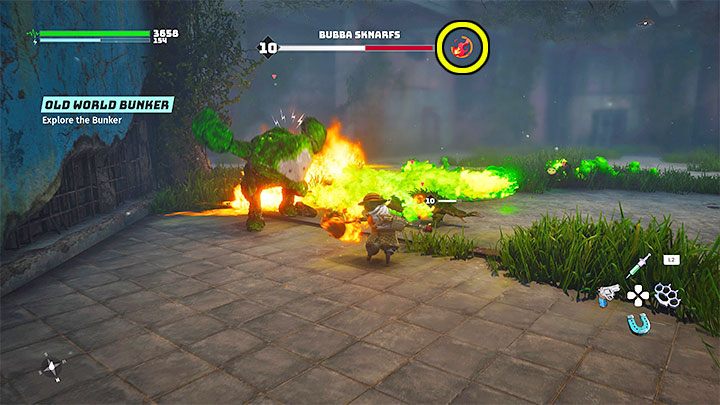 Elements are directly related to statuses, which can weaken the main protagonist or his enemies.

When you attack an enemy, you can subject them to a negative status. An icon appears next to the enemy's health bar in such case. If an enemy isn't immune to the effects of a particular element, they may start gradually losing health points. This can be a good technique to weaken your enemies even more. Special powers can be particularly helpful here, as some of them are area-based and can thus be used to expose enemies standing close to each other to a given element. 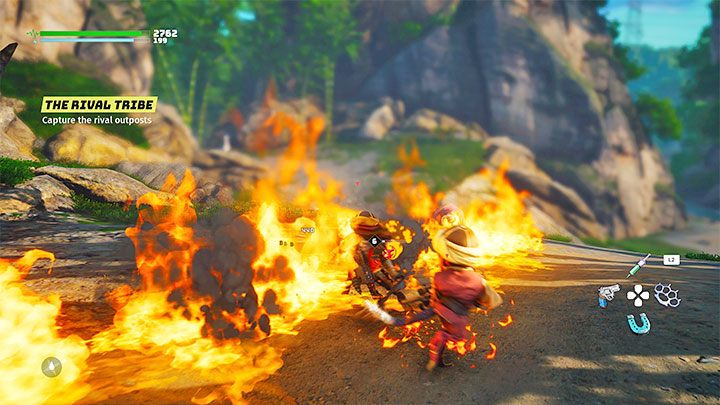 During combat, you have to account for the fact that the protagonist can be affected by a status too, for example when they come into contact with a burning area. Try to keep this in mind and be especially defensive during fights that pose a risk of receiving a negative status. If need be, have some first aid kits ready to heal yourself faster than usually.