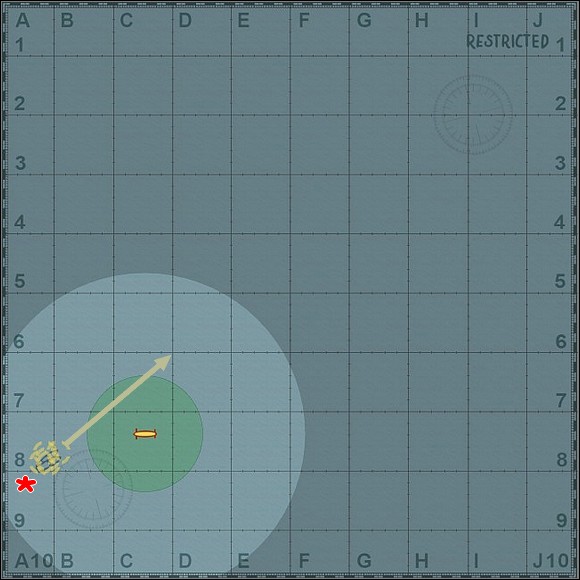 This mission should be first in submarine challenges because it's easier then previous. Dive to the periscope depth and sail west to cut in the course of enemy flotilla of warships heading to the north-east direction. This flotilla consists of three destroyers, heavy cruiser and a battleship. You can easily deal with enemy destroyers by fighting with them using my method, which you should already learn by reading the "Hints" chapter of this guide: turn off the engine when American destroyer is getting close to your sub and send him two torpedos when he's turning and cutting in your course, after loosing the sound contact with your ship on his sonar. [#1] Fire your torpedos from rear (stern) or front (bow) launchers - depends on situation. And you don't have to even raise your periscope, you can launch torpedos in the external view. If the destroyer don't want to cut in your course for some reason (take a look at map to get to know when he's going to sail), just turn on the engine once again (but only for a while) to lure him into an ambush, to enforce a proper turn on him. After sinking American destroyers (which is easier than avoiding them/not fighting with them) it's time to play with other two warships, still retreating to the north-east. If you must emerge earlier to have a breath of fresh air, just sail away a bit (to the safe distance) and emerge couple of times (each time just for a second) to catch max. amount of fresh air. Then dive again on periscope depth and attack! The rest of American warships isn't armed with depth charges, they also don't have sonars to detect you, so you can approach them with impunity from one of the boards (sides). To sink the cruiser you'll have to fire at him a salvo of four torpedos at least. You will need probably more then four torpedos to send to the bottom enemy battleship. [#2]

So after firing the salvo of four torpedos you can sail under this damaged warship (by diving deeper) and when you passed by him - finish him off (from the periscope depth this time) by launching two torpedos from rear (stern) launchers. [#3] After destroying the entire retreating fleet (*) scenario will end successfully. [#4]