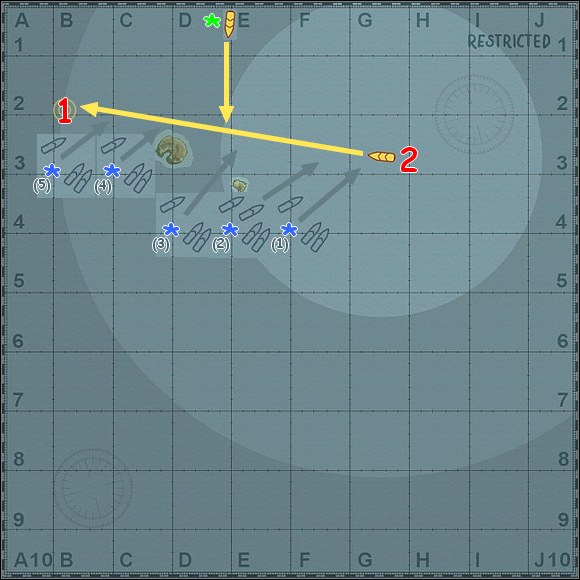 Your main goal in this scenario is to reach the evac point to escape the area (1). You're retreating with a powerful Japanese battleship "Fuso". [#1] Of course "Fuso" must survive (2) the incoming battle if you want to escape successfully. Switch to the map with Tab key and right-click the evac point (1) to set the course for your warship. During the journey you will have to repel successive groups of enemy warships of course. How many these groups you'll see depends probably on how fast you destroy each of them and how fast you sail. In my gameplay I had to face to five groups, they all attacked me from left board. [#2] 1st group consists of three destroyers, 2nd - four destroyers. In 3rd I saw three warships (two of them were heavy cruisers) and in 4th - also three ships (one of them was an American battleship of New York-class). The last group consists of three warships but two of them are British battleships "Prince of Wales" and "Repulse". Groups of these warships are marked on my map with numbers 1-5 in brackets and they all don't attack you simultaneously of course but... well - almost: they appear on map systematically when you're closing to the evac point. I have more problems not with the battleships, as you probably thought, but with small, agile and fast enemy destroyers armed with torpedos. Shell'em using your artillery (deck guns), take an adjustment "at a guess" on their movement while aiming.

You can also switch to the map from time to time and assign targets on it by right-clicking them to order your warship attack them automatically. But pay attention that your deck guns fire automatically only when you're in map view - after exiting the map you must fire by yourself unfortunately.
Update: you say that the ship will only auto fire when you are in map mode, but if you want to let it target distant targets while you take the helm to dodge torpedos, you can just switch to your AA guns, and the ship will keep firing artillery.
(submitted by: sona1111)
On this map, when it's gully zoomed in, you can also see the torpedos launched by enemy destroyers. Try to avoid these torpedos by taking evasive actions - slow down, speed up, sometimes even stop if necessary or make a turn: every manoeuvre depends on situation. [#3] It's smart also to turn your bow towards the incoming salvo of torpedos when you have no chances to avoid it to get hit only by one or two torpedos instead of the whole salvo. Though, from time to time you will get hit by a torpedo surely and at the edge of the screen you'll see blinking red icon that means usually that you must deal with water leak, one or more. [#4]

At that time quickly switch to repair's panel and send emergency team (or more than one) to suitable location(s). Take a look at "Hints" chapter of this guide to learn about ship's damages and how to deal with them. [#5] If you're shooting at enemy personally (in external vie) it's wise to use binoculars and zoom in the view (mouse wheel) to fire at enemy warships from a max. possible range, before the enemy can even get closer to you and open his fire. This note refers especially to the Allied cruisers and later - also battleships. [#6]

Half-way to the evac point (1) will join you another Japanese battleship ("Yamashiro") sailing from the north. If you want to realize secondary objective the "Yamashiro" also must not sink (*). Take a look at him in external view and right-click him to place him in formation with your warship. [#7] Sinking enemy warships (also battleships) approaching from left board should be much easier since you're together. Destroy New York-class battleship at first by firing at him from a max. distance (use binoculars and zoom in the view). Take an adjustment on his movement, not big because he's rather slow. [#8]

Prepare similar fate for British battleships "Prince of Wales" and "Repulse" - they can try to attack you from both directions. [#9] By sending to the bottom both of them and also all other enemy ships that attacked you in waves you'll complete hidden mission objective (*). At that moment (when all Allied ships are destroyed or you've managed to reach the evac point) this scenario should end successfully. [#10]