Air transport vehicles remind a bit helicopters seen in our twenty-first century. They have got as many as seven seats. First one is always being occupied by the pilot, who's only task is to steer. Next two seats are for soldiers who want to use anti-personnel machine guns installed at the sides of the vehicle. Other seats are for the landing group. Players occupying these seats can use - if necessary - their own weapons. In addition, they can repair the vehicle they're sitting in or throw ammo and medic hubs away, so infantry on the ground may resupply and take medicine. Unfortunately, these soldiers have no cover, so there is a risk that a one little bullet may harm or even kill a member of the landing group.

When somebody ejects and leaves Shepherd or Yastreb vehicle, he automatically uses the assault pod. That is the reason, among others, why air transport vehicles are being used for transporting infantry and letting it board the enemy Titan (or attacking and taking control over flags placed behind the frontline as well). The greatest disadvantage of these vehicles is the fact that they're quite slow, so they are also an easy target for the anti-aircraft weapons.

Warning! Jet-propelled engines installed in these machines cannot turn upside down. As a result, air transport vehicles are unable to fly upside down for a longer period.

Besides steering, pilot is responsible for activating Active Defense system of the machine, what can be done by pressing the [X] button. Soldiers firing the guns installed at the sides of the vehicle may use zoom, which can be turned on by clicking right mouse button. 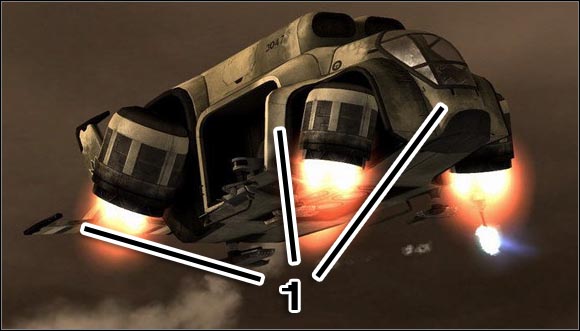 1 - whole transporter. Armor of these vehicles is equal everywhere, so it doesn't matter what we're aiming at.