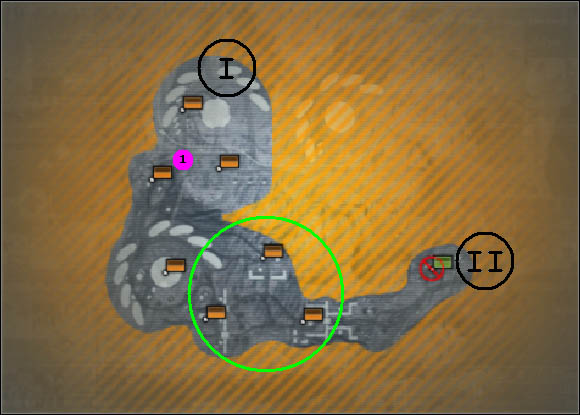 Map description: Battle takes place in an extensive, hilly terrain. From time to time, in flat area, groups of skyscrapers may be spotted. Part of the flags is surrounded by fortifications, however capturing such points is not a big problem. Majority of the spawn points can be taken while sitting in a vehicle, which suits the character of the map, filled with heavy machinery. Distances among flags are quite long, but vehicles are everywhere on this map, so it is not necessary to march through the whole terrain. Infantry role is minimized here. That's why snipers won't find many targets. Engineers are much more important - these guys, with mines and repair devices, can effectively prevent enemies from capturing flags and, in the same time, allow friendly vehicles to drive where they want.

Analysis: Green circle in the south surrounds three flags. It is the region of first confrontation in the round. Spawn points are fortified, bunkers' roofs are good vantage points not only for Recon soldiers with sniper rifles but also for Engineers carrying rocket launchers. [1] is the only place, where large groups of infantry fight. It's on a slope of a mountain, what can be used by sharpshooters in order to kill some tangos. Flag surrounded by skyscrapers, on the white pavement, in the south-west part of the map, is quite important, because of awesome amount of heavy machines that respawn near that spawn point. Attacking northern and eastern terrain from there is really comfortable. However, that point can be captured only by infantry and it's difficult to hold it for long. Main bases with armored and air vehicles are situated in points [I] and [II].

Strategy for EU: Impossible mission at the beginning - EU forces must prevent the enemy from attacking flags situated the western and northern part. Moreover, they have to defend the eastern spawn point situated close to PAC main base. Opponent will try to get through the frontline in a recon or air transport vehicle. It is quite possible that enemy will manage to do it, so EU army will have to prepare a counterattack in order to recover lost flags. I advise to divide into a few squads, in which every single member will drive a tank or a battlewalker. These squads will have to move from one spawn to another and regain control of them. Air machines and the Commander should make their job easier. Chewing off enemy forces will result in a comeback to the initial situation, in which PAC has only their main base. If the round ends in such circumstances, it means a total victory.

Strategy for PAC: First of all, the team has to attack the nearby EU flag swiftly, with heavy machinery (snipers may prove useful too). It is necessary to assault spawn points in the western and northern part in the same time. This can be done by getting through in a recon or air transport vehicle, filled with soldiers. Capturing EU main base and other important flags is the key to success. This will lead to cutting Europeans from heavily armored reinforcements. Final finishing off consists in capturing every single flag, which will decrease the amount of EU tickets. Commander should send supplies to friendly tanks and battlewalkers as often as it is possible. 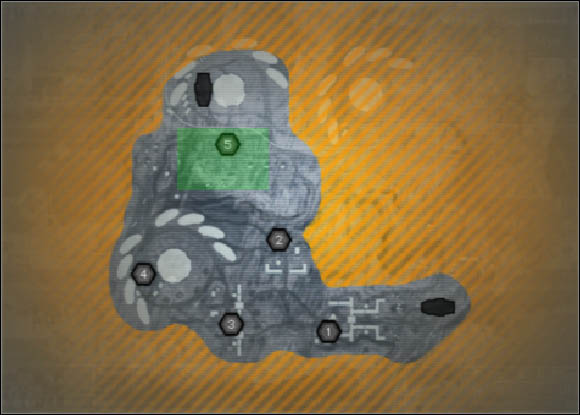 Titan mode map doesn't differ much from the Conquest mode battlefield. The only difference can be spotted in northern area, marked by a green rectangle. There's only one missile silo, which belongs to EU nearly all the time. Europeans may move their Titan towards it, there's no danger. Fights take place near silos 1, 2, 3 and 4. That's why PAC should left the Titan in the main base, just for safety.