On this page of our guide to Batman: Arkham Knight you will find a summary and detailed overview of the AR challenges of the Predator category. Find out when the challenge becomes available and what steps you need to take in order to complete it.

Availability: You need to complete the Two-Faced Bandit side mission, connected with Twoface and bank heists by his men.

Completion requirements 3 stars: You need to stop a bank heist within 1 minute and 15 seconds. This means that you need to hurry. You cannot afford careful planning on how to take down the individual men. Take a more risky approach, which are going to be easier, thanks to the alarm that goes off in the bank. It is a good idea to perform takedowns through ceilings and use gadgets, e.g. batarangs or electric pulse, to take down the opponents quickly. Also, wait for opportunities to use fear takedowns, thanks to which you can take down as many as five opponents, in one take, if you are lucky. 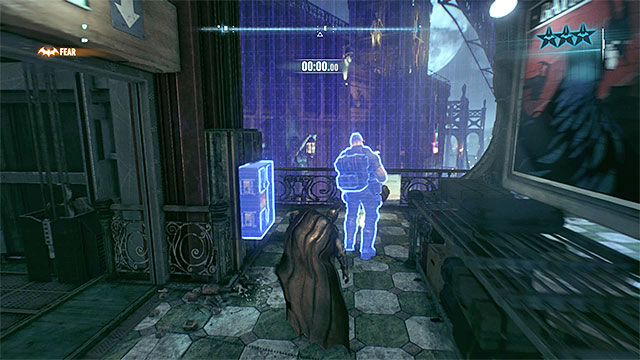 Availability: This challenge becomes available after you knock down a thug (a standard one or the one with a minigun), with a environment attack (i.e. using elements of the environment). Additionally, you need to make sufficient progress into the storyline.

Completion requirements 3 stars: There are three different objectives to This challenge and each one is rewarded with a star.

2. Perform a fear takedown through a wall - you can wait at a weakened wall for an opponent to happen by, or try the voice synthesizer to lure him to the wall. You simply need to stand at the other side, then.

3. Eliminate the opponent with the minigun with an environment takedown, i.e. using elements in the environment - This is the most demanding objective and it is a good idea to take care of it at the beginning of the challenge. Find the minigunner, drop down to his level and start following him carefully. Wait for the opponent to reach the box on the wall and is highlighted in blue. At This moment, press simultaneously X and square (in the PS4 version), which activate an environment attack. Also, you can pick any other blue object in the environment, but you would also have to make the minigunner approach it, e.g. using the voice synthesizer. 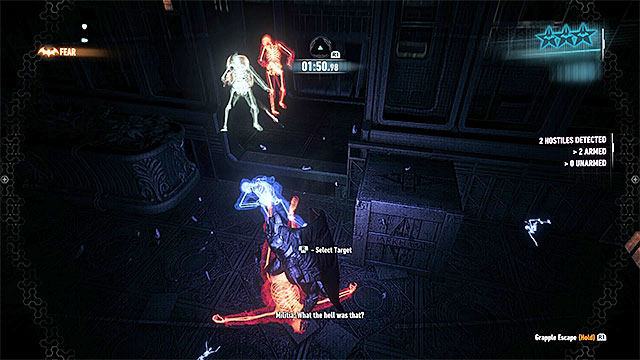 Availability: This challenge becomes available after you use fear takedowns on the opponents (is a single take). Additionally, you need to make sufficient progress into the storyline.

Completion requirements 3 stars: There are three different objectives to This challenge and each one is rewarded with a star.

1. You cannot take any damage during the challenge - This is not too difficult to achieve. By default, avoid direct confrontations with opponents, because they pack firearms and even using a smoke pellet may not help, if you are detected. The only exception are the occasions on which you perform a fear knockout. In such a situation, after a successful attack, get away from the site, before the rest of the opponents arrive.

3. You need to perform two fear takedowns - It is best to perform the first one at the very beginning of the challenge, e.g. on two opponents only (you can use a voice synthesizer to make two opponents come together). As for the other takedown, you should try it towards the end of the challenge, i.e. when there are only 3-4 opponents left. After you attack the opponent with fear takedowns, make sure that the paramedic is the last one that you take down This way (an example of such an action in the above screenshot).

Under the Pale Moonlight 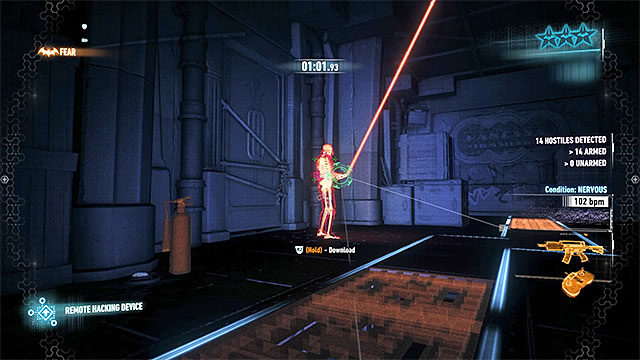 Availability: This challenge becomes available after you use the voice synthesizer to lure an opponent into a spot where you set a trap. Additionally, you need to make sufficient progress into the storyline.

Completion requirements 3 stars: There are three objectives to This challenge and each one is rewarded with a star.

1. Perform a fear takedown on four opponents - The important piece of information is that you need an upgraded version of fear takedowns here (buy an appropriate upgrade in the development menu), because they can be used to stun a maximum of three opponents at once. As for the objective itself, it is a good idea to handle it at the beginning of the challenge, because it is easier to plan the attack when there are more opponents around. You can group the opponents after you make some noise or after you use the voice synthesizer on them.

2. Use the voice synthesizer to lure an opponent to a weakened wall that has been sprayed with the explosive gel and detonate. If executed properly, This should knock out the opponent.

3. Eliminate the drone operator as the last one. It is a good idea to find him at the very beginning of the challenge (he is staying on one of the lower levels) and steer clear of him, while completing the challenge. As for the drone itself, you can hack it, of course, because the only requirement is that the operator is unharmed (up until the moment when he is the last man standing). To get close to the operator and download the codes necessary to hack into the drone, use venting shafts (the above screenshot).