This unofficial manual for Batman: Arkham Knight is a thorough guide into this complex game. The basic assumption is to help the player solve the most frequently encountered problems, as well as to discuss the entire contents of the game. This guide has been divided into two main parts.

The first one comprises of walkthrough for the game's main storyline and for side missions, which are connected with locating dangerous criminals and capturing them. Descriptions of the individual missions, among others, provide information exploration, combat, sneaking, using the batmobile and fighting game bosses also, a separate chapter has been devoted to them).

The second part of the guide comprises, predominantly, of a comprehensive description of all the activities connected with the Riddler. The rest of the chapters provide among others, walkthroughs for all then of the Riddler trials and information of the whereabouts of all the 243 available puzzles screenshots + detailed maps . Apart from that, the second part of this guide provides descriptions of Augmented Reality Training events, where you need to prove your expertise at fighting, melee combat or driving the batmobile.

This has been complemented with the development of the Batman (the best abilities) and winning trophies. Batman: Arkham Knight is the fourth installment of the game developed by Warner Bros Interactive Entertainment, where you take control of the Batman and where you get to explore the virtual Gotham City. Like in the previous installments, you are going to take on many challenges, where you have to struggle against the criminals made famous by the comic books. In itself, also the city houses many interesting secrets, which wait for you to discover them. It is worth adding that, for the first time in the history of the franchise, you can explore the are not only by yourself, but also using the batmobile.

This guide has been color coded in the following manner: 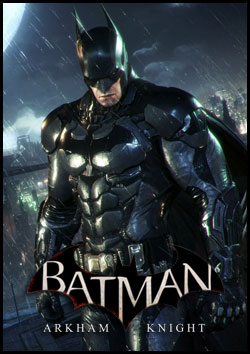 Batman: Arkham Knight is the fourth part of the action series about the Dark Knight. After weaker review of part three entitled Batman: Arkham Origins, the publisher decided to entrust the work to the Rocksteady studio again. The action of Batman: Arkham Knight like in Hitchcock starts with an earthquake. Scarecrow, an old enemy of Batman, has placed a bomb with fear toxin in Gotham City. The confusion as a result of the evacuation of the city's inhabitants has been used by the most dangerous enemies of Batman.

Batman: Arkham Knight is an action game using third person perspective (TPP) and a mechanic is similar to the previous parts. The innovation in this part is the introduction of Batman vehicle, well-known from comic books and movies. The Dark Knight can use the Batmobile to move quickly from place to place, firing rockets, stun opponents and catapult himself and immediately switch to glide in the air what is well-known from previous parts.

The graphic design was improved in comparison to the previous parts. There were improved: character models and the Batman’s cape received a new, advanced physics.

Superhero games are a curious, uneven lot. Along games that simply cash in on popular characters, offering little novelty in terms of mechanics and gameplay, we also have games that are simply outstanding. Here we look at what's coming in 2019.

Batman Villains: Who Will Fill in for the Joker?

Some of the series veterans are confirmed to appear, alongside new characters like the titular Knight of Arkham. However, a great part of the villain roster is still shrouded in mystery.