On this page of our guide to Batman: Arkham Knight you will find exact locations of Riddler trophies (11-21) that can be obtained in Arkham Knight HQ. Trophies are one of secrets (collectibles) available in the game. 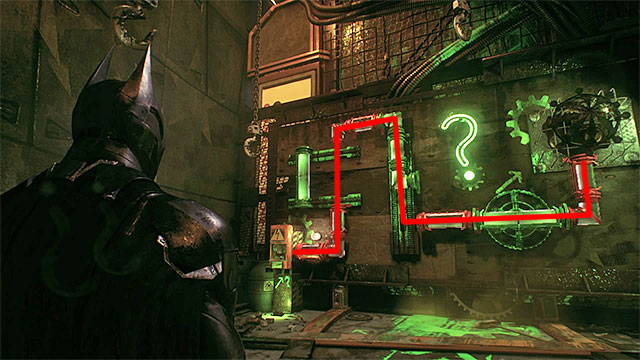 Trophy walkthrough: Find the control panel on level one of the shaft and use the remote hacking device on - it the password is SEMICONDUCTORS. In the next room, you need to solve a puzzle that consists in transporting the electrical charge through the labyrinth of tubes. First of all, you need to use the electric charge and use the batarangs to hit question mark at the right moment. As a result, specific fragments of the labyrinth move. The correct route for the charge has been presented in the above screenshot. After you solve the puzzle, catch the trophy, using the batclaw. 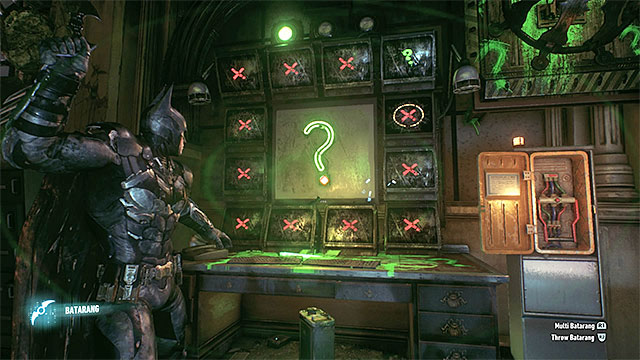 wait for the right moment to throw the batarang 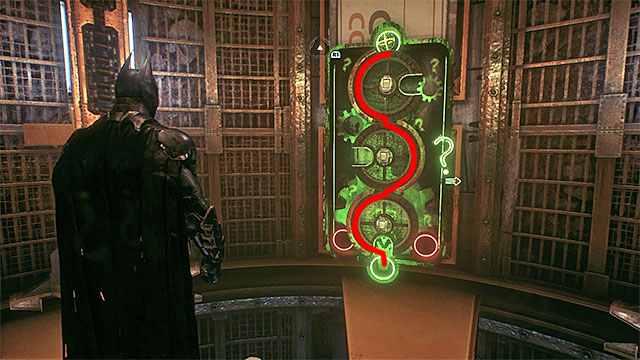 Trophy walkthrough: The trophy is inside the orb on the third level of the shaft and to get it, you need to lead the orb through a big metal structure. For this, you are going to need two gadgets - remote hacking device is for moving and stopping the three rotating elements of the structure, whereas the batarang is for changing the direction in which they rotate. The route for the orb has been presented in the above screenshot. Remember to stop the entire mechanism before you change the rotating direction, which decreases the risk of having the orb fall away from the central mechanism (the puzzle resets when the orb reaches one of the red holes). After the orb falls into the green hole, come up and collect it. 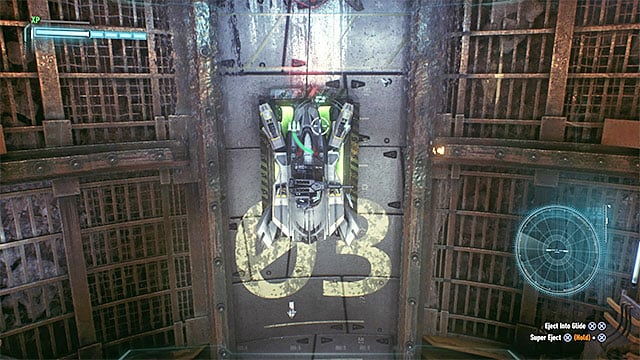 Park the batmobile on the big pressure plate

Trophy walkthrough: This is one of the more demanding puzzles in the game. Start on the second level of the shaft, around the entrance to the Arkham Knight's HQ. Get into the batmobile and just like during the main storyline, use the vehicle's hoist on the latch under the ceiling, so you can lower yourself down the shaft. Stop around the third level, on the big vertical pressure plate. 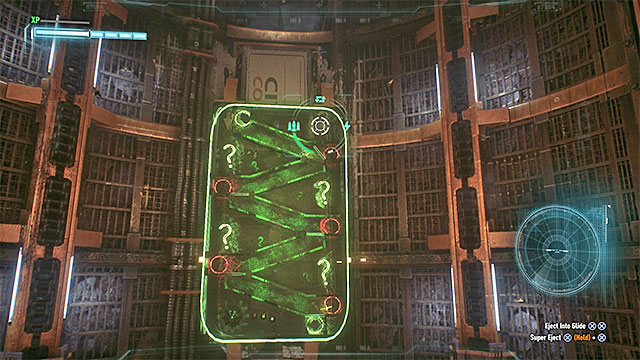 Direct yourself towards the huge metal structure opposite the shaft's wall. The plan is that you have the orbs reach the green hole at the very bottom of the "ramp". The difficult part is that all of the blockades are lowered by default and, as a result, the orbs keep falling into the red holes. You need to prevent that by firing the batmobile's cannons at the nearby green question marks, which will raise the blockades for a short period of time.

The most difficult thing about this puzzle is that you need to have, as many as, three orbs reach the holes and not let them fall into the red holes, in the meantime. At the beginning of the puzzle, there should be only two orbs there so, shoot at the question marks at a regular basis. After you have two of the orbs in place, look up quickly and handle the third orb. After you have completed the puzzle, reach any of the nearby ledges and get the trophy using the batclaw. 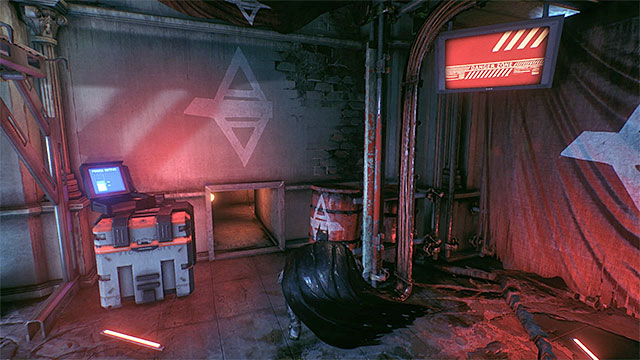 Trophy walkthrough: The trophy is in the room in the Eastern part of the fourth level of the shaft. Find the venting shaft to the North-West of the collectible and follow it. After you get to the other side, prepare the electrical charge and use it on the generator. You need to rotate the metal structure in the way that allows the orb to reach the green hole (fortunately, this is not too complicated). 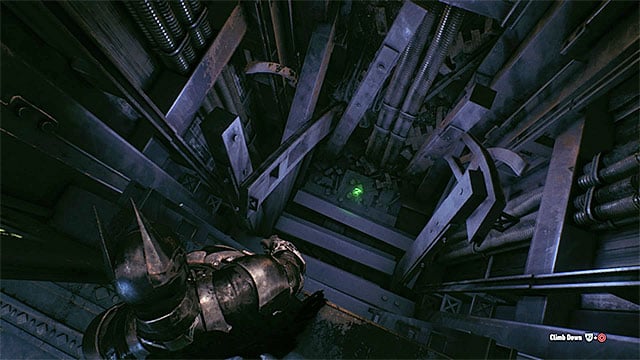 The trophy is at the bottom of the elevator shaft

Trophy walkthrough: The trophy is marked on the map as one of the collectibles on the fifth level but, as a matter of fact, you need to start off in the Southern part of the fourth level (close to the rabbit outfit exhibition). Here, find the vertical elevator shaft and jump down to reach the collectible. 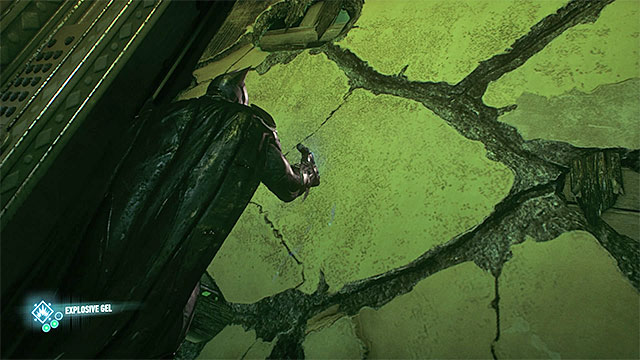 Spray the explosive gel over the weakened wall, after the elevator ride

Trophy walkthrough: Reach the North-Eastern part of the fourth level of the shaft and enter the elevator. Use the electric charge on the generator to take a ride to the higher level. Here, you find a weakened wall that you need to spray the explosive gel over. Behind the wall, you find the trophy. 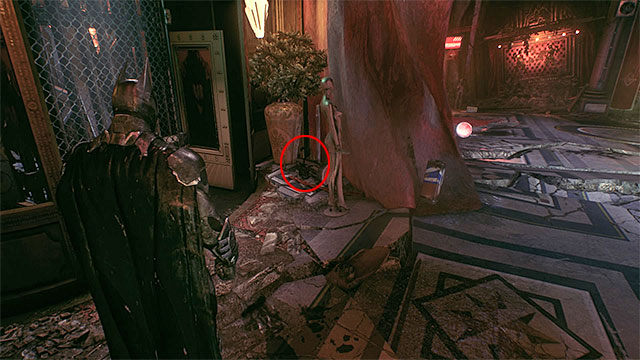 After you exit the elevator, check out the area on the left

Trophy walkthrough: The trophy is on the ground right next to the elevator that you travel on between level four and five. 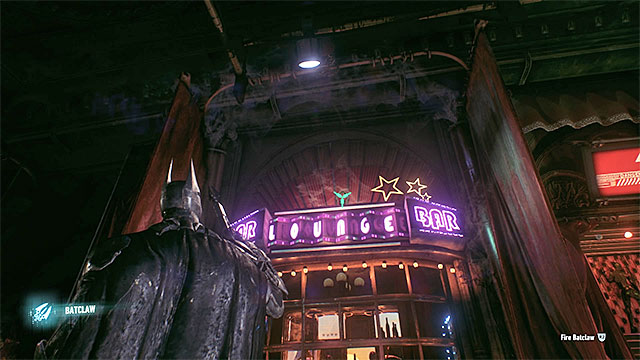 The trophy is on the rooftop of the bar

Trophy walkthrough: The trophy is on the rooftop of the small bar in the Northern part of the fifth level of the shaft. Get it using the batclaw. 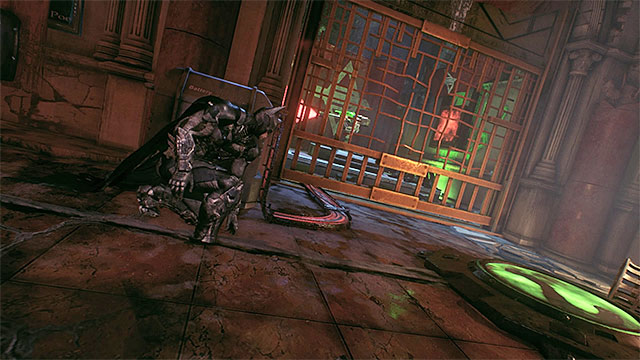 Hack the turret before you walk onto the plate

Trophy walkthrough: Reach the Western part of the fifth level, i.e. The area where there is the turret. Hack the turret using the remote hacking device to disable it for thirty seconds. Quickly, walk onto the pressure plate, which unlocks a small venting shaft. 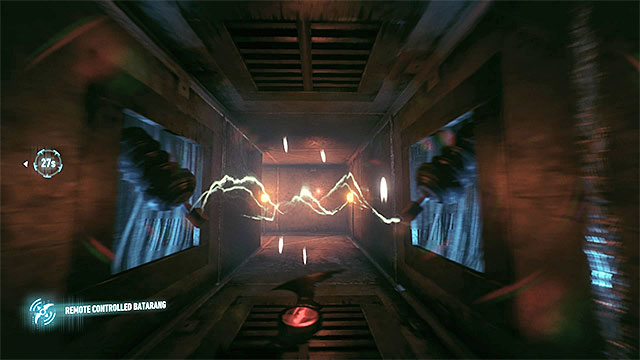 After you throw the batarang for the second time, you need to fly it into the electrical discharges in the shaft 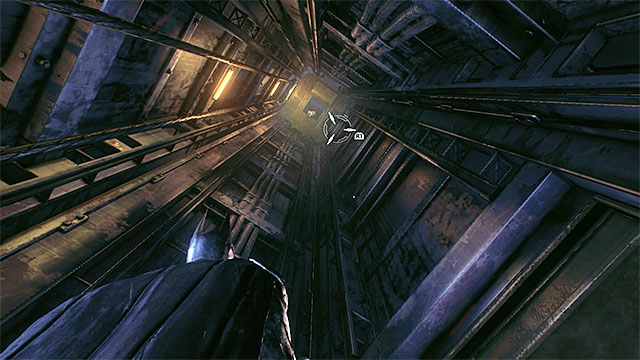 Trophy walkthrough: The trophy is in a seemingly inaccessible part of the fourth level of the shaft. To get there, in the Western part of the fifth level of the shaft, you need to hack, or destroy (which is a better idea - the description of how to get to it is in the walkthrough for 20) the turret. Then, walk into a small elevator shaft, look up and use the grapple. 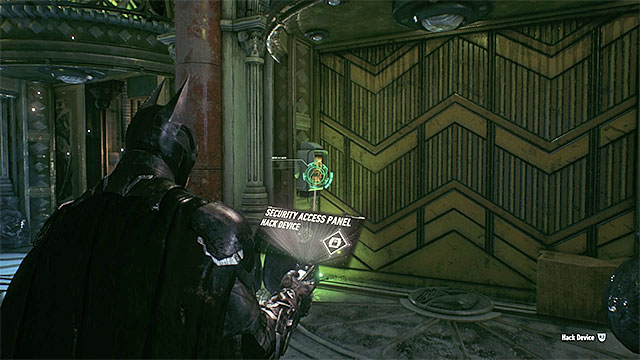 You need to use the remote hacking device twice

After you reach the fourth level of the shaft, locate the control panel and hack it using the remote hacking device - the password is UNDERNEATH. Walk into the next area, check out the glazed flooring and hack into the console that you can see below. You can now use the batclaw to get the trophy.