On this page of our guide to Batman: Arkham Knight you will find exact locations of Riddler trophies (1-10) that can be obtained on board Stagg Airships. Trophies are one of secrets (collectibles) available in the game. 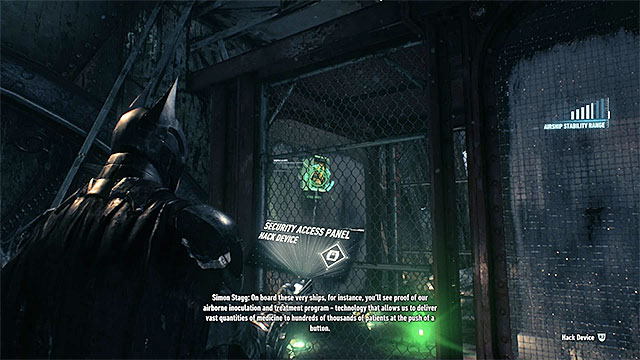 Use the remote hacking device to gain access to the trophy

Trophy walkthrough: The trophy is on one of the middle levels of the airship's foyer. To the South of it, there is a locked gate. Use the remote hacking device on the panel that you can see across the gate (the password is FRICTION) to access the collectible. 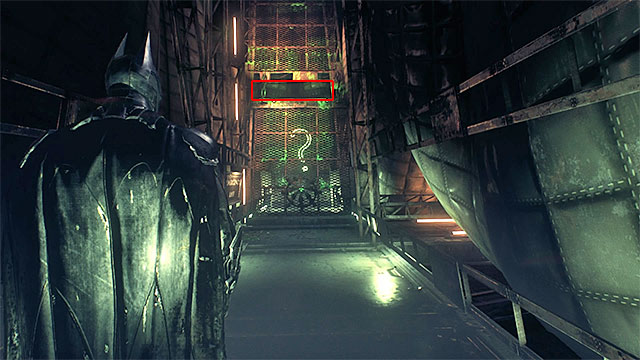 Trophy walkthrough: The trophy is under the corridor between the foyer and the cargo compartment (take the manhole on the floor to get there). Here, find a pressure plate, walk onto it and select the remote controlled batarang. You need to control it across the small opening opposite the pressure plate and hit the green question mark. You can now collect the item from the cage. 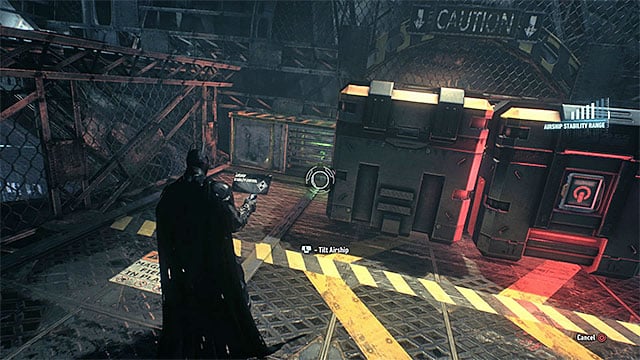 Trophy walkthrough: The trophy is in a small cage. Stand next to it and use the remote hacking device to hack into the airship's stabilizers and tilt it. As a result, the big containers should move and reveal the grate that you need to rip of to get to the collectible. 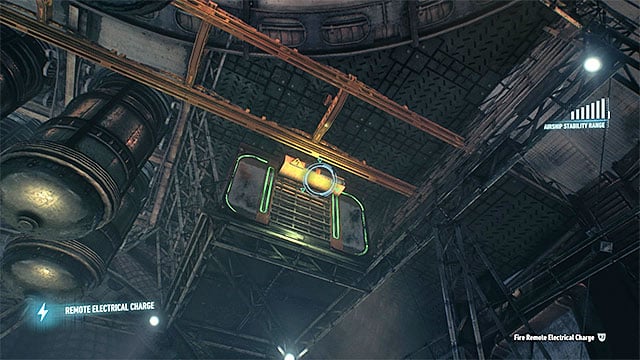 Trophy walkthrough: Explore the lower levels of the foyer. Here, you should notice a cage with green lining, under the ceiling. Use the remote hacking device to hack into the airship's stabilizers and tilt it. As a result, the cage shown in the above screenshot will be revealed. Fire an electrical charge at it, to lift the gate and pull the cage using the grapple. You can now collect the trophy from the cage. 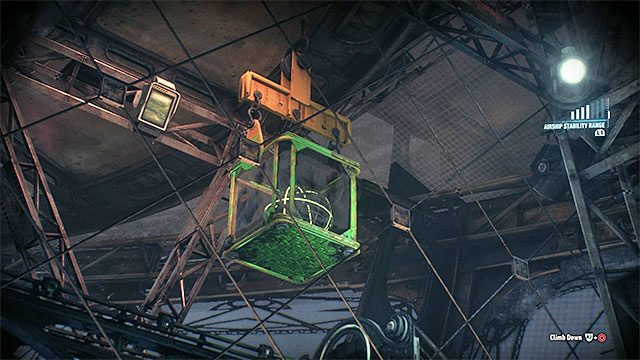 Trophy walkthrough: Explore lower levels of the foyer. You need to find the orb shown in the above screenshot inside of which there is the trophy. Hack into the control panel right next to the orb, with the remote hacking device - (the password is GRADIENT), thanks to which the orb comes out of the glass cube. 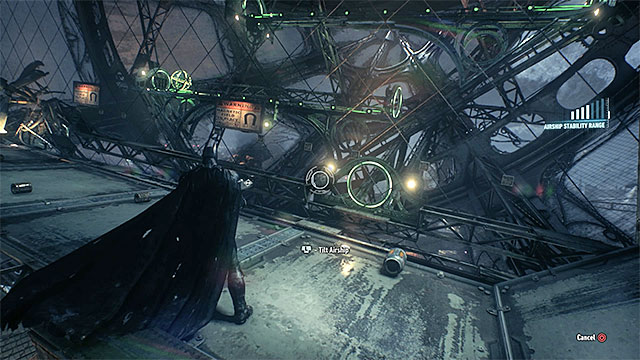 Tilt the airship to the sides, thanks to which the orb, with the trophy inside, will roll

You need to keep using the remote hacking device. Hack into the stabilizers and tilt it to the sides, which will keep the orb rolling along the paths. It needs to reach the opening below, thanks to which you will be able to collect the trophy. 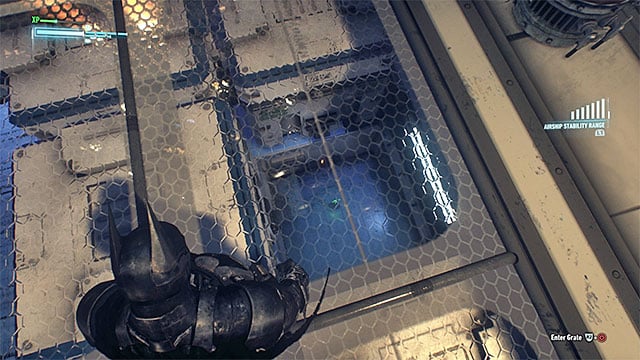 Trophy walkthrough: The trophy is in the lower area of the cargo compartment and you can reach it, while exploring the main level - it has been shown in the above screenshot. 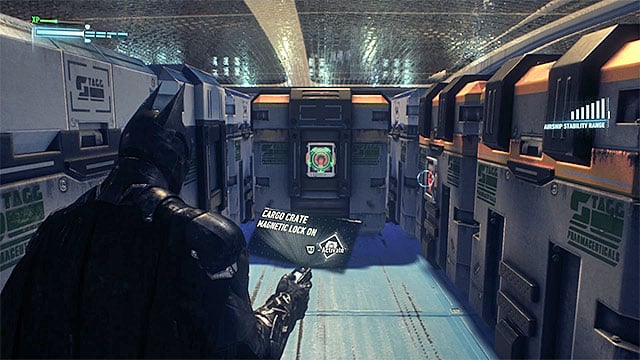 Take the manhole to descend to a lower level and walk between the big containers. Stop near the two containers shown in the screenshot, in the middle of the cargo compartment. You need to use the remote hacking device to release the blockade on one of the crates. After you back up, tilt the airship, thanks to which both of the containers will move right. 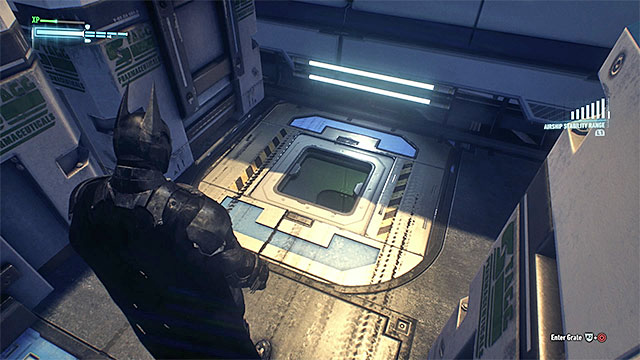 Take the manhole to get to the trophy

Note that this revealed the manhole in the floor, into the venting shaft, which is located to the West of the trophy. Jump in and follow the shaft to get to the collectible. 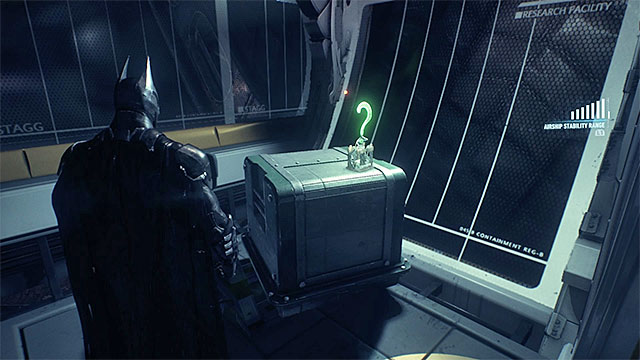 The trophy is well exposed

Trophy walkthrough: The trophy is at the end of the corridor, near the terminal and the turret. 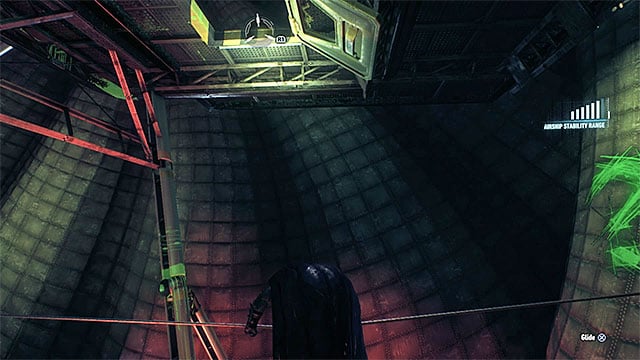 Climb onto the zipline and turn your attention to the ledges

Trophy walkthrough: Explore the corridor where the turret used to be. Right now, there is a manhole under the ceiling, here. You can get into it, using the grapple. After you get into the room with red pressure plates, select the rope launcher and fire it. Zip down the line and, towards the end of the ride, jump onto the rope and turn back. Again, use the grapple to reach the ledges above. On the top ledge, you find the trophy. 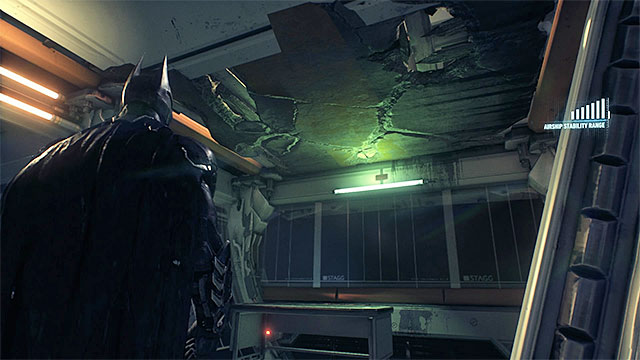 Trophy walkthrough: The trophy is attached to the ceiling in the glazed room, which is inaccessible only apparently. Find the weakened fragment of the ceiling, near the trophy, which has been shown in the above screenshot. Climb onto the table and spray the explosive gel over the ceiling. Back up and detonate it. 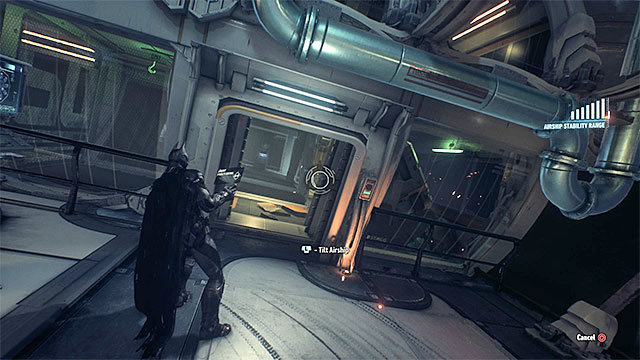 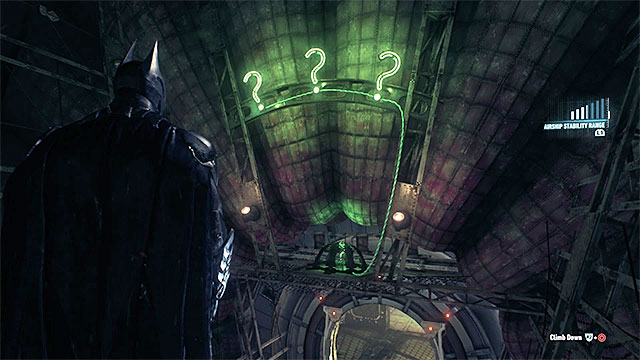 Throw batarangs at the question marks

Trophy walkthrough: Use the grapple to make it over to the ledge above the door of the main corridor into the lab. Find three green question marks, above Batman and quickly throw three batarangs to hit them all. This will open the cage with the trophy - reach it with the batclaw.