On this page of our guide to Batman: Arkham Knight you will find tips concerning the exploration of the Beta Stagg Airship. We provide specific information on how to neutralize the two control towers of the airship. 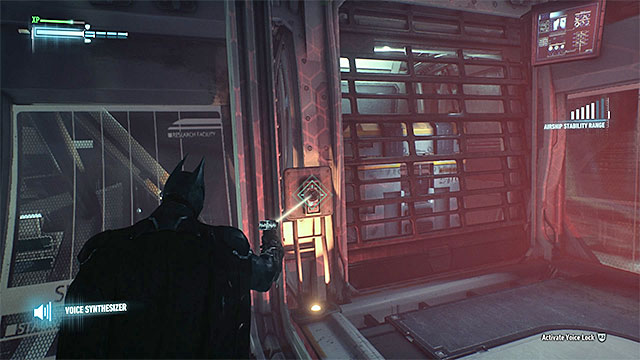 The exploration of the Beta airship is less complicated than in the case of the Alpha. To all intents and purposes, you only need to watch out while in the Western part of the airship. In one of the corridors, there are two turrets with several collectibles past them. Do not try hacking into the turrets, or running past them. Instead, use the voice synthesizer on the reader shown in the above screenshot. After the gate opens, use the device for remote hacking, to tilt the airship. A big container will slide out of the room, which destroys both of the turrets and allows you to continue your exploration.

Note - Attached to the container, there is trophy marked as 20, in our walkthrough. After you move the container, it falls out of the airship and crashes near the shore of the Founders' Island. To get the collectible, you need to make it over there!