On this page of our guide to Batman: Arkham Knight you will find exact locations of Riddler trophies (1-10) that can be obtained in Panessa Film Studios. Trophies are one of secrets (collectibles) available in the game. 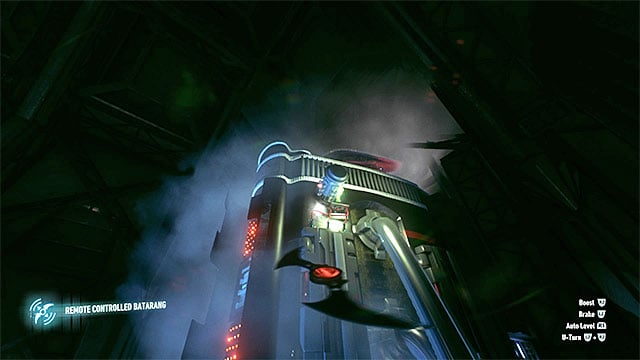 The description of finding the trophy: The Trophy is in the area between the Quarantine Area and the Backstage. You can't get to it as the access to it is limited by a closed gate. To solve that problem you need to use the remote batarang. Place yourself in the Quarantine Area and send the batarang towards the discharges at the ceiling, as shown at the picture above. You need to get the batarang electrified. 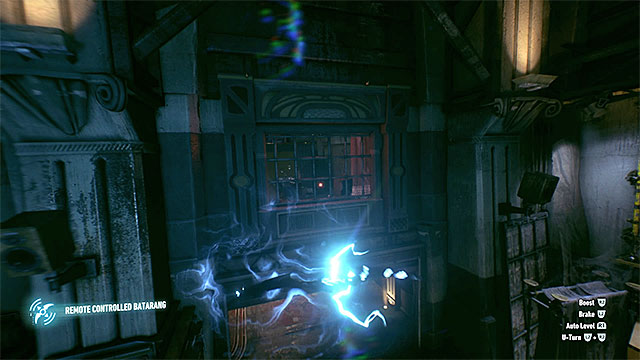 The electrified batarang needs to fly through the shutter

Turn the batarang back and steer it towards the big shutter placed above the way out from the Quarantine Area. Get through that shutter and turn right. Send it to the lower level and make it hit the fuse box, which is located next to the closed gate. You can enter the new area and take the trophy that is on the floor next to the stairs. 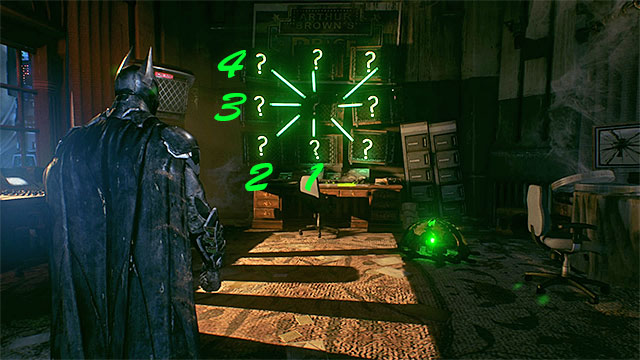 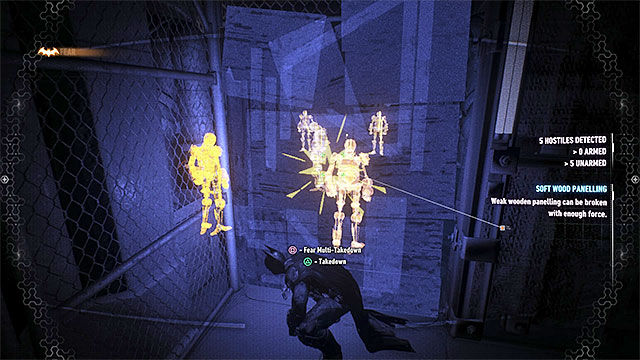 The description of finding the trophy: The Trophy is in the area in between the Quarantine Area and the Backstage. There is a separate door that leads to it. After entering the new room turn left towards the ventilation shaft and go through it. Get out of the shaft and stand behind the weakened wall, next to one of the five Riddler's robots. You need to activate the fear takedowns. You can finish that task only when you have the maximally improved version of that attack, which allows you to get rid of all five targets at one run. Otherwise you won't be able to neutralize all five machines in four seconds. If you haven't improved that ability yet, you need to wait until you gain enough of the experience points and do some shopping. After eliminating the robots go to the previous room and get the secret from the newly opened cage. 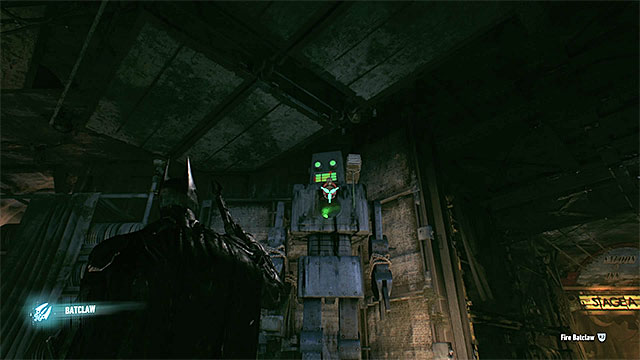 The place of using the claw

The description of finding the trophy: in the main area of the Backstage you need to find an interactive grapple, get hold of it with the claw and start pulling. Use that gadget again in order to catch the trophy. 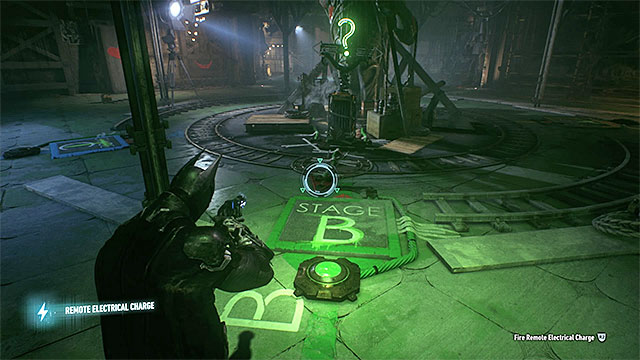 The description of finding the trophy: You solve this riddle in the main area of the Backstage and this one is a little bit complicated. Namely, it involves the turning of the Poseidon's statue. During solving of that riddle you will need to use two gadgets - batarangs, you can hit the main button and change the direction of the turning of the statue (right or left), and with the electric charge you can make the whole construction move and stop it in the right places. 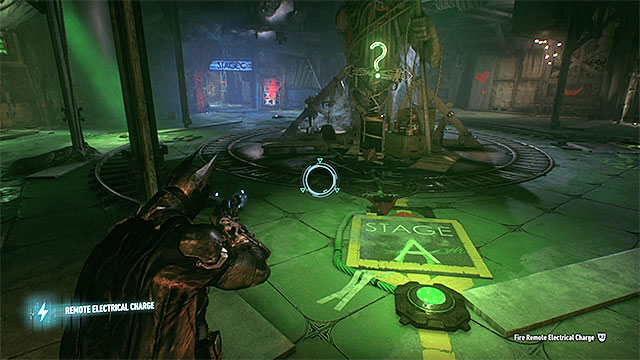 Now, the statue should start turning right, so when you need it use the batarang on the upper button (the right arrow needs to turn on). Make the whole mechanism move by using the electric charge, quickly get to the plate with a green letter A on it and wait until you can use the electric charge again to stop the construction. The second green light will turn on. 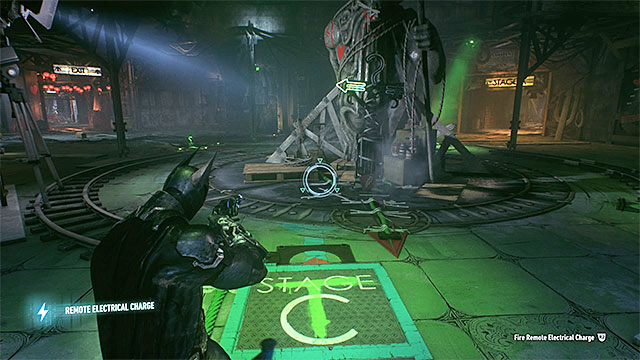 You need to make the statue turn left by using the batarang, because it can't, at any point, get close to the "starting" plate which resets the riddle. Activate the generator by using the electric charge and go to the plate with letter C, on which a green letter T has been painted. Wait until the red arrow shows up and use the electric charge to stop the construction. The last green light will turn on, and finally you will be able to take the trophy from the cage. 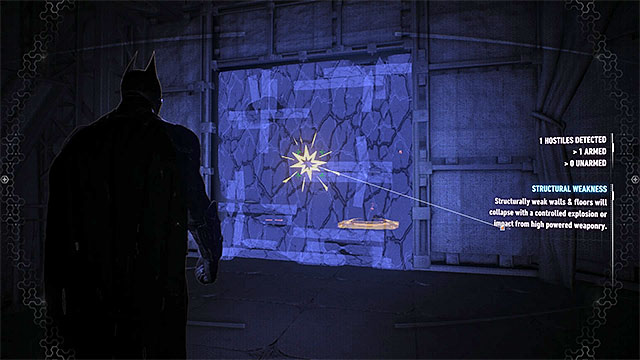 Locate the weakened wall and use the explosive gel on it

The description of finding the trophy: Explore the northeast part of the main area of the Backstage. There is a weakened wall there (you can use the detective mode to locate it faster) and you need to destroy it by using the explosive gel. After doing that get into the new room and place yourself on the pressure plate. 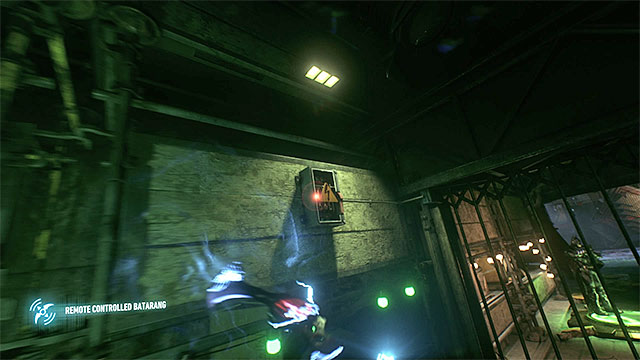 You need to hit the fuse box at the very end

Turn towards a small opening in the wall and start throwing remote batarangs into the small shaft. First two batarangs need to hit the green question marks in different parts of the shaft. The last, third, batarang needs to get through the whole shaft and hit the fuse box, which is in the room next to the one in which Batman is. It will lead to unlocking the trophy. 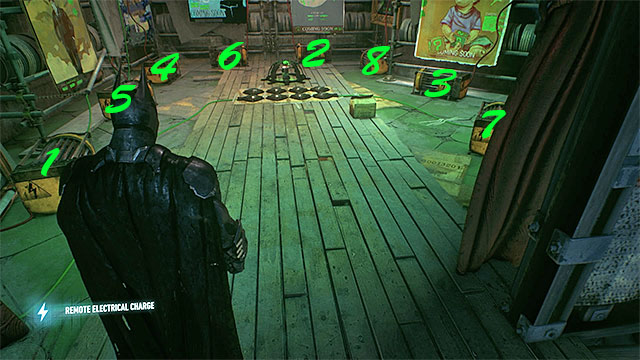 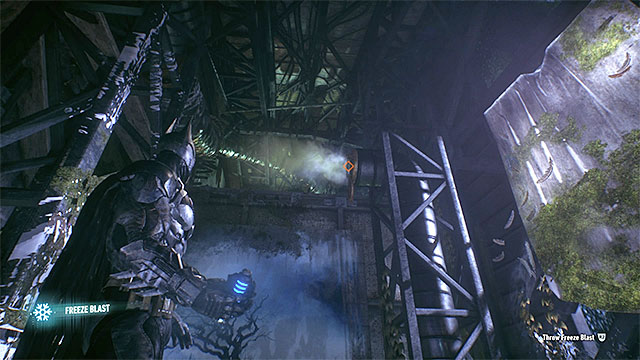 The description of finding the trophy: Explore the corridor in the northwest part of the main area of the Backstage. You need to locate a pipe from which a hot steam is getting out, as shown on the picture above. Use a Freeze Blast on it (you can take that gadget from the Quarantine Area), thanks to it you will unlock the possibility of pulling yourself up to the ceiling by using the hook. 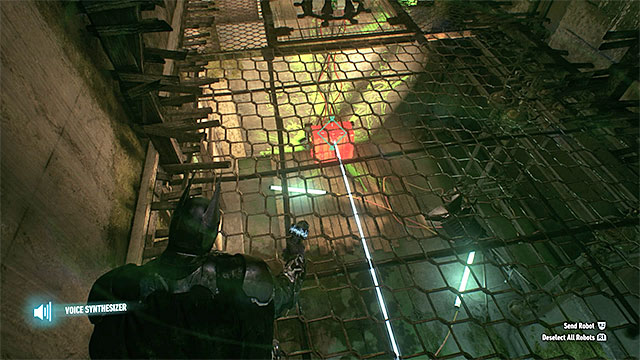 Sabotage the gun box and lead the Riddler's robot to it

Get above the room in which the Riddler's robot is. Start with using the disruptor on the gun box, which can be seen on the lower level, thanks to which it will get sabotaged. Now, you need to give the robot an order. If you don't have a chip that allows you to control the robots focus on other secrets, and, sooner or later, you will get one. Otherwise, use the voice synthesizer on the robot. Make him go and check the gun box. If you sabotaged it, the robot would get destroyed and the cage with the trophy would open on the upper level. 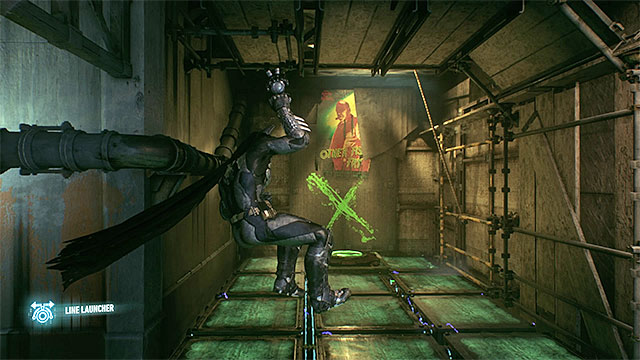 The description of finding the trophy: Explore the western part of the main area of the Backstage. There is a gate there, that you can lift with using the electric charge. Place yourself on the pressure plate and choose the line launcher from the inventory. Launch it dead ahead, slow down the line and turn the camera so that you can see the left corridor. As soon as you get next to it use the launcher to change the direction you move by 90 degrees. Land on the second pressure plate, turn around and use the line launcher again. Just as before, you need to turn 90 degrees to get to the third pressure plate. Land on it. You can hide the claw so that you can catch the trophy from the cage on the wall. 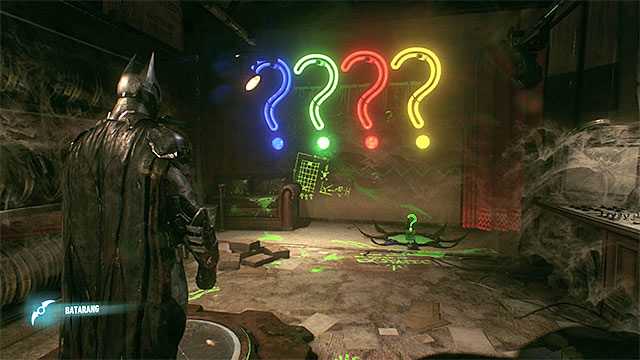 The right combination of the colors of the question marks

The description on finding the trophy: Get to the stage A of the movie studio and explore the small room, which is on the left from the entrance. In order to solve this riddle you need to stand on the pressure plate and use the batarangs to set the right colors for the four question marks. The clue to that riddle is in the room on the right from the entrance there are four lights in there. Nevertheless, you don't need to go there, because you can use the above solution. Looking from left to right order of colors is: blue, green, red and yellow. You can take the trophy now.